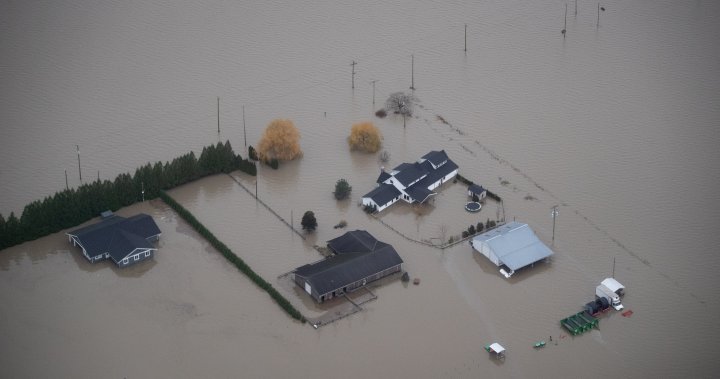 The B.C. government will be providing an update Tuesday on the current flooding situation and clean-up in the province.

That will be live-streamed above, on BC1 and on the Global BC Facebook page.

5:53
Princeton calls for military aid to help with flood recovery

Princeton calls for military aid to help with flood recovery

With a series of storms of varying intensity expected over the next few days, the province is expected to be hit with three this week.

By January 2022, B.C. will implement the first steps of a ranking system to describe how intense atmospheric rivers will be, which is similar to a system used in the U.S.

In Abbotsford, water levels continue to recede in the Sumas Prairie region, giving displaced residents and farmers a sign of hope.

The city said Monday water levels have fallen by seven inches now that the breaches on the Sumas River are sealed.

Evacuation orders have been rescinded for some properties north of Highway 1 along with businesses east of Whatcom Road.

At the peak, water levels were increasing by three feet within an hour.

However, that did not stop neighbours from saving 250 cows from a local dairy farm. The team used 10 cattle trucks and the cows were safely moved within two hours.

In Merritt, some residents will be getting a first look at the flood damage Tuesday.

Asphalt is buckled and roads are wiped out but crews are making progress in making repairs, the province said Monday.

The compromised wastewater treatment plant is back online but a boil water advisory is in place and residents are being asked to use as little water as possible, and to not put a lot of sewage down the drains.

The city has completed rapid damage assessment, classifying properties as either not restricted, restricted entry or unsafe.

Residents who are able to return home are also being told any medical emergencies will be rerouted to Kamloops and garbage service resumes next week.

CP Rail says service between Kamloops and Vancouver will reopen by Tuesday afternoon.

Crews have been working around the clock to repair the line, including moving 150,000 cubic yards of material to rebuild the areas, which is the equivalent of 30,000 one-ton dump trucks moving rocks and dirt.

CP says it plans to coordinate with customers and terminals to clear the backlogs and get things moving as quickly as possible.

This story will be updated following the press conference at 3 p.m.