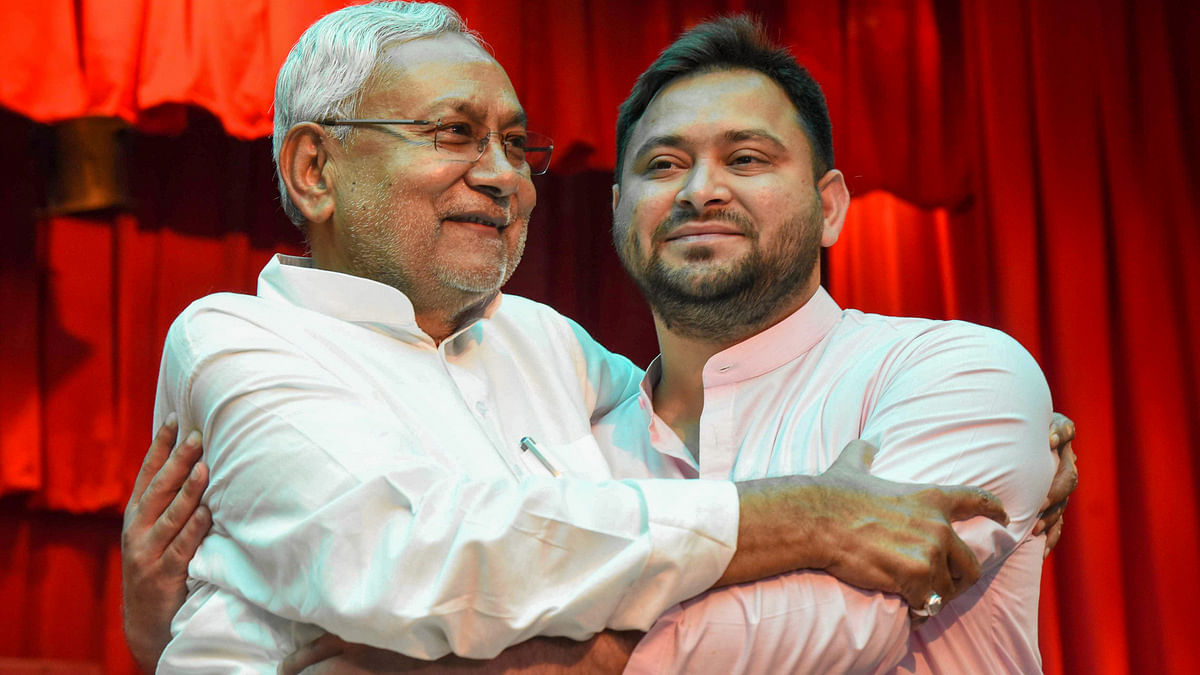 Patna: Ever since the Nitish Kumar-led Janata Dal (United) ended ties with the Bharatiya Janata Party (BJP) last week and returned to government in Bihar with the support of allies Congress and the Rashtriya Janata Dal (RJD), the new mahagathbandhan (grand alliance) government has been courting controversy on a near-daily basis.

While the announcement of the new cabinet was greeted by CM Nitish Kumar’s former allies with barbs directed at many of the new minister’s tainted records, the government has also received criticism on account of the behaviour of some members of RJD chief Lalu Yadav’s family.

On Wednesday, Lalu’s eldest son and the new Bihar forest and environment minister, Tej Pratap, was photographed attending a meeting with forest department officials with brother-in-law — sister Misa Bharti’s husband, Shailesh Kumar — in tow. Kumar is a qualified IT engineer, who also holds an MBA degree from Indian Institute of Management (IIM) Ahmedabad.

The next day, the two were again seen together in a meeting with officials of the Pollution Control Board (PCB).

He added: “In RJD there is a tradition of jija-saala (brothers-in-law) rule”, recalling “extra-constitutional” powers once wielded by Sadhu Yadav and Subhash Yadav — brothers of former Bihar CM Lalu Yadav’s wife, Rabri Devi.

“Perhaps a new set of jija-saala raj (rule) is on the rise,” said Ram.

While no one from the government — including Tej Pratap — have responded to the controversy, Shailesh Kumar has defended his presence while talking to a section of the media.

“On the first day, supporters and relatives are present to give moral support. I was there but it was not even a formal meeting. Tej Pratap asked me to accompany him, which I did. I did not participate in the meeting,” he said.

To tackle the controversies, Lalu’s younger son and Bihar Deputy Chief Minister Tejashwi Yadav issued a list of does and don’ts to RJD ministers Saturday.

The list of instructions include not buying new vehicles for personal use through their department, discouraging touching of feet by workers and people, being courteous, being transparent in work and always apprising the CM about the development in their respective departments.

According to JD(U) sources, the Deputy CM issued the directives after Nitish Kumar had a talk with him regarding recent developments.

Meanwhile, the JD(U)-RJD-Congress government is also under attack for including in the ministry those against whom allegations of graft or criminal charges have been made. This includes agriculture minister Sudhakar Sigh, education minister Chadrashekhar and food and consumer protection minister Leshi Singh.

The induction of such ministers had led the BJP to wonder whether CM Nitish Kumar has softened his earlier stand against having ministers with ‘tainted’ records.

“The definition of ‘good governance’ appears to have changed. When Nitish ji was with us, both a BJP and a JD(U) minister had to quit because criminal cases were registered against them. Now it does not seem to matter,” said BJP MP Sushil Kumar Modi. He was referring to the BJP’s Ramadhar Singh and the JD(U)’s Ramandad Singh.

While Kumar has maintained a steadfast silence on the matter so far, sources in the JD(U) said the party is worried. “The image of Nitish Kumar as a man who does not tolerate injustice is being tarnished. How long can he remain silent?” aske a JD(U) member of legislative council, speaking on condition of anonymity.

Bihar’s new agriculture minister Sudhakar Singh is the son of RJD state president Jagdanand Singh. Ironically, in November 2014, the then Nitish Kumar government in the state had instituted a case against Sudhakar, accusing of embezzling funds to the tune of Rs 5.31 crore.

It had been alleged that Sudhakar, who operated two rice mills in Bihar’s Kaimur district had received paddy supply for the mills from the Food Corporation of India, but instead of returning the rice, he sold off most of it.

Asked about the controversy, Sudhakar told ThePrint, “The rice was stolen not by me but allegedly by the officials, The matter is still pending before the Patna high court”.

Meanwhile, the state’s new education minister and RJD leader Chandrashekhar is facing the heat for a case in which he has even been let off by the Delhi high court.

In February 2019, security personnel posted at Delhi’s Indira Gandhi Airport recovered 10 live bullets from the then MLA’s bag. Even though he declared that the bullets had come inside the bag by mistake, a case was registered against him under relevant sections of the Arms Act and Indian Penal Code.

The minister was acquitted by the Delhi high court, however,  after his explanation and apology was accepted.

His appointment as education minister, however, has led the opposition to claim that he loves bullets more than books.

It’s not just the opposition, however. which is causing trouble for Nitish Kumar. The Bihar CM’s choice of ministers is being questioned even by those in his party.

Ironically, Leshi Singh, the new food and consumer protection minister in the Nitish Kumar government, has been targeted not by the opposition, but by fellow JD(U) leader, Bima Bharti.

“Leshi Singh runs a criminal gang which runs extortion rackets in Purnea and kills anyone who opposes her,” Bharti alleged before the media Wednesday, hinting at her possible resignation if Leshi is not dropped from the ministry.

While Nitish Kumar has rallied to Leshi’s defence, the new minister’s alleged criminal links are being talked about in other quarters too.

“Leshi Singh’s husband Butan Singh was a gangster in Purnea, who was shot dead while appearing in court. Later Leshi Singh took over the gang. I have written a letter to the Governor asking him to probe the criminal activities of the minister,” claimed former IPS Amitabh Das.

Incidentally, Bheema Bharti’s husband Awadhesh Mandal is also a dreaded criminal in Purnea. Rivalry between the two leaders has been brewing for the last five years, according to party sources, and may cause further headache for the JD(U).

Meanwhile, Nitish Kumar is also fighting fire from the opposition for making RJD’s Kartik Singh the law minister on the same day — August 16 — that he was to appear in a court in Patna in relation to a kidnapping case in which he is an accused.