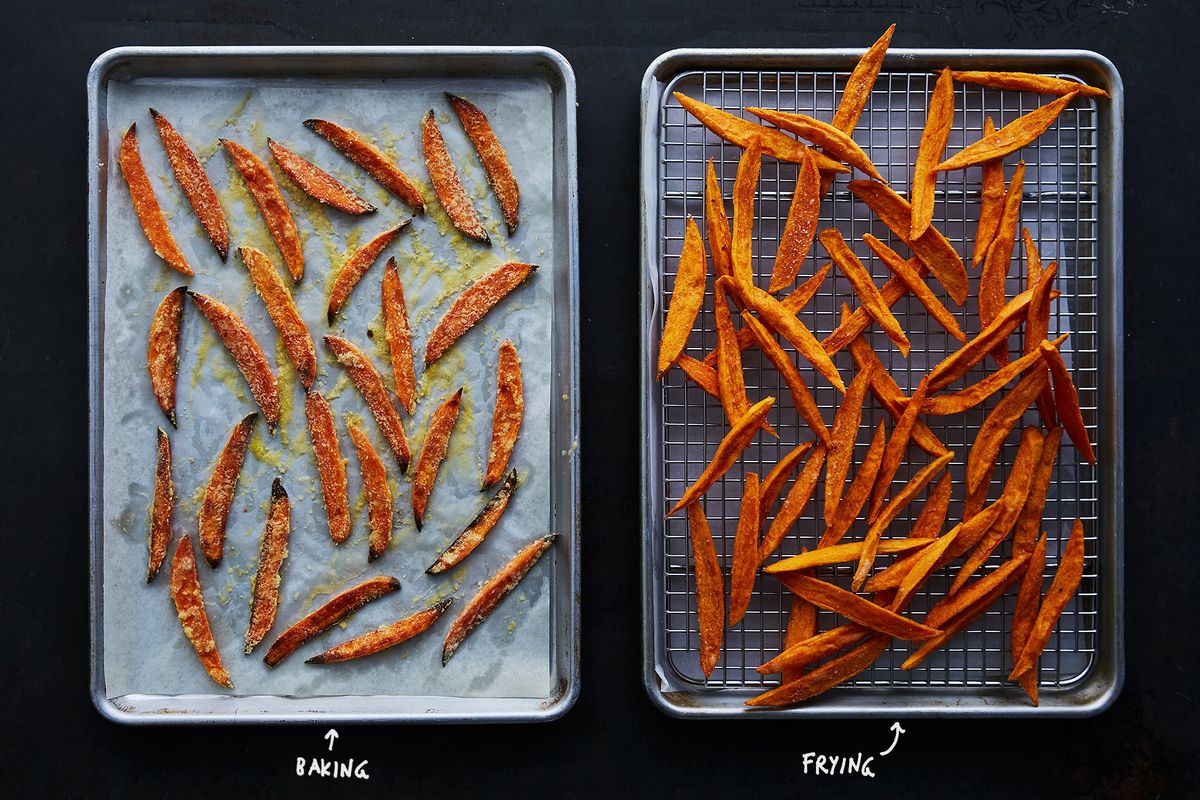 It is a truth universally acknowledged that whenever a recipe for fried food is published—be it chicken or French fries, falafel or doughnuts—the first question will be whether that food can be baked instead.

And fair enough! Frying is messy, stinky, and splatter-y. While I’d happily accept a fried fish taco if someone else is offering, I don’t want to fry on a weeknight in my small, ventilation-poor kitchen (and I imagine you don’t either). Unless I have to, that is.

To see whether frying is worth the frazzle (or whether a baked version can make a perfectly acceptable stand-ins), we made and tasted baked and fried versions of sweet potato fries and falafel. Read on to see what happened—and, if you’re curious, why it did.

To test baking versus frying, we made two foods we love but would rather not go through the trouble to fry: sweet potato fries and falafel.

Baked sweet potato fries seemed like a sure bet: After all, the most popular sweet potato “fries” on the internet are actually baked—and a recipe for fried fries is surprisingly hard to come by.

Is This the Best Sweet Potato Fry Recipe on the Internet?

To make them, cut one large sweet potato (about 1 pound) into 1/4-inch-thick wedges, then coat with 2 tablespoons of corn starch or potato starch (we used potato) followed by 3 tablespoons of oil. Spread the wedges out in a single layer on an un-greased baking sheet, then bake at 400° F for 25 minutes, flipping every fry after 15. (We had to crank the heat to 425° F for the last 5 minutes to get a good color and crust.)

For the actually-fried fries, we made So Good Blog‘s Delicately Crispy Sweet Potato Fries: For this recipe, rinse the sweet potato strips in a few changes of cold water, then coat them in starch (this recipe calls for corn starch, and a much smaller amount: 1 1/2 teaspoons—as opposed to 2 tablespoons in The Kitchn’s recipe—per every sweet potato) and deep-fry in a pot of oil that’s between 325° and 350° F until golden, 3 to 4 minutes, and drain on a paper towel–lined baking sheet.

For the falafel, we turned to a good old Food52 favorite: World’s Easiest Falafel with Tzatziki.

We baked one batch on a lightly oiled baking sheet for 25 minutes at 425° F, until sufficiently brown on one side.

The other batch, we fried according to the recipe’s instructions: We heated 1 cup of oil in a heavy-bottomed pan, then fried the falafel balls for 3 minutes on each side, until deeply brown all over.

On first look, we were a little confused/put-off/upset by the appearance of the baked sweet potato fries, which, due to the large amount of potato starch, were gloopy going into the oven and retained a starchy exterior even once they were baked. The fried fries were flawless in comparison, with their smooth and discernible crusts.

Yet we actually preferred the baked sweet potato fries, despite their gunky appearance and chalkier coating. Neither group stayed particularly crispy—both erred on the softer side of the fry spectrum, even immediately after they were cooked, and got only softer over time—but the baked strips maintained more of a bite. Plus, the thin ends of the wedges got extra brown on the baking sheet (see those dark brown points in the photo below?), whereas every strip in the fried batch had a uniform softness.

We also found that the flavor of the baked bunch was also sweeter and purely sweet potato-y, not obscured by any frying oil. We’d definitely try baking sweet potato fries again—perhaps with a smaller amount of starch, at a higher oven temperature, and on preheated baking sheets.

Or, if we wanted to give frying another go, we might try to double-fry (two runs through the hot oil), which is supposed to help the fries stay crispy far longer.

You will not mistake a baked falafel for a fried one. Whereas our fried falafels were brown and crunchy all over, the baked patties were crisp on just one side. Yes, we could have been more diligent about flipping them, but even the brown underside of the baked falafel was not nearly as flavorful or crackly as the crust on their fried counterparts.

But many of our official taste-testers (that is, hungry members of the Food52 team) noticed that if you slathered the falafel in enough tzatziki, the differences became less noticeable—a lesson for the wise!

We may try baking falafel again—flipping them halfway through the baking time and being more generous with the amount of oil—but, in this instance, frying seems worthwhile.

To understand why baking and frying impart such different results in terms of flavor and texture, you have to understand just a teeny bit of the science behind it.

First off, frying creates a steam barrier that protects the interior of the food from drying out: When your falafel or drumstick hits oil, which is at a much higher temperature (typically between 325° to 425° F) than the boiling point of water (212° F, let us remind you), there is a sudden expulsion of hot steam from its surface, explains Amanda Greene, a contributing food scientist to the Huffington Post.

This water vapor repels the oil, preventing it from penetrating the interior of the food, and cools the surrounding oil so that the heat can make its way to the center of the food before the exterior burns. As that heat moves inward, starches gelatinize (in the case of potatoes), proteins denature (fried chicken), and fibers soften (fried vegetables), say David Joachim and Andrew Schloss of Fine Cooking.

And frying is much more efficient than baking, which makes for shorter cook times, which means that you’re not dehydrating the interior of the food in an effort to crisp up the outside. When you fry, as Harold McGee outlines in On Food and Cooking, the “entire surface of the food is in contact with the cooking medium” and that cooking medium (oil!) is much more efficient at transferring energy than air. We know this: Sweet potato fries take nearly 30 minutes in the oven compared to 5 minutes in the oil; falafel take 25 minutes in the oven, 6 in oil.

No other cooking method delivers such crisp, delicious browning while keeping food moist and tender on the inside.

Because the food’s whole surface (or, in the case of the falafel, half of the surface at a time) is in contact with the hot oil, you’re also more like to come away with evenly-cooked pieces. The oil can infiltrate all of the tiny cracks and crevices—just compare the smooth surface of the fried fries to the spotty baked fries, and the uniformly-browned falafel patties to the splotchy baked undersides. In the oven, only some of the food can be in contact with the hot baking sheet at any given point, which necessitates flipping (and spatula contortion). Plus, you risk burning thinner sections—like the points of the sweet potato wedges—before the exterior is sufficiently crisp.

Cook Your Vegetables in Hot Oil, But Not Always

If all this sounds like a case for frying, don’t be alarmed: Remember that we favored the crisper, sweeter baked sweet potato fries! Perhaps because they were so thin with rather lean interiors, that the natural flavor was not overpowered by a hot bath of oil?

Regardless, there is a time and a place for frying. But in many cases, you can fake it in the oven—just don’t think your egg rolls will be as smashingly crunchy as those from the restaurant.

What the Heck is the Maillard Reaction (& Why Should You Care)?

But baking doesn’t always compromise quality! Below, you’ll find baked (left) and fried (right) versions of some of our favorite foods. They’re not exactly the same, but both are good options (promise!).

How to Make Very Crispy Classic Fries (Without a Recipe)

What typically fried foods have you had great success—or great failure—baking? Divulge in the comments below.