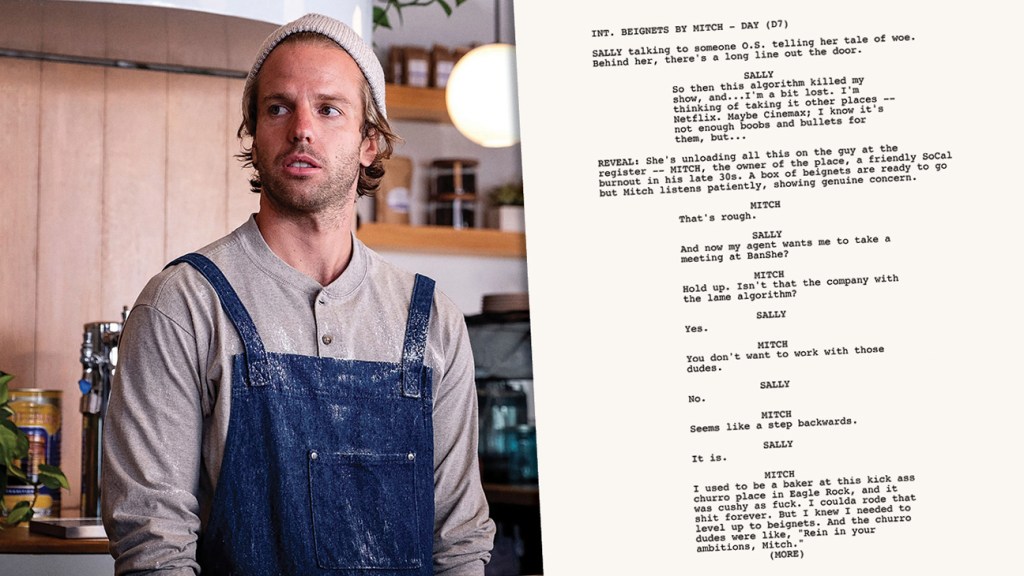 In “710N,” the sixth episode of Barry’s third season, a hugely popular beignet shop opens in Los Angeles and becomes a destination for three of the show’s aimless characters. In this scene, Sarah Goldberg’s Sally opens up to the proprietor of Beignets by Mitch about her career frustrations after her TV show falls apart. Emmy-nominated writer Duffy Boudreau breaks down the first scene of the episode’s running joke about the hipster “stoner oracle.”

“Mitch is this kind of oracle dude who runs a super popular hipster venue,” Boudreau says. “People line up around the block to eat these desserts — but, more importantly, to get life advice from him.” While he gives sound guidance to Sally, she still ignores everything he has to say. “Oftentimes, the right answer is right in front of us and we know it, but it’s not what we want to hear,” Boudreau adds. “This theme of self-delusion is such an important part of the show, and it is perfectly encapsulated [in the scenes with Mitch] where our characters are being real with themselves.”

Actor Tom Allen plays Mitch, the stoner owner of the beignet shop that has taken L.A. by storm. “We got super lucky,” says Boudreau. “I think it’s a really hard role because it is so specific.” Mitch is a sounding board for Sally to air her grievances, and he takes it all in. “The big note Bill gave him on the day [we shot the scene] was, ‘Just don’t show any emotion at all,’ ” Boudreau recalls of co-creator/star Hader’s direction. “It was all about the stance, and it gave him this weird gravitas that was really funny.”

Boudreau says that Sally, played by Sarah Goldberg, is the empathetic heart of the show. “Even when she’s being an asshole, she’s right,” he says. “She’s clearly the most talented person in [Gene Cousineau’s acting] class. She’s been successful at running her own show. She got into a little bad luck, you know, but for whatever other personality traits that she has that turn people off, Sally is the most serious person in the show.”

The Los Angeles-set Barry is, at times, a Hollywood satire, but the city’s setting also gives the writers lots of room to explore L.A.’s fringes for its humor. “For us, it’s the weird corners of L.A.,” says Boudreau of where the writers find their inspiration. Beignets by Mitch was a chance to poke fun at L.A. food culture and the idiosyncratic people who populate the city’s urban sprawl.

Later in the episode, Barry and NoHo Hank pay their own visits to Beignets by Mitch — and naturally neither of them takes Mitch’s advice either. “It was fun to have one character that met three of our main characters. That’s just not a normal part of the show,” says Boudreau, who notes that Sally and NoHo Hank have yet to interact across Barry‘s three seasons.

This story first appeared in a July stand-alone issue of The Hollywood Reporter magazine. To receive the magazine, click here to subscribe.