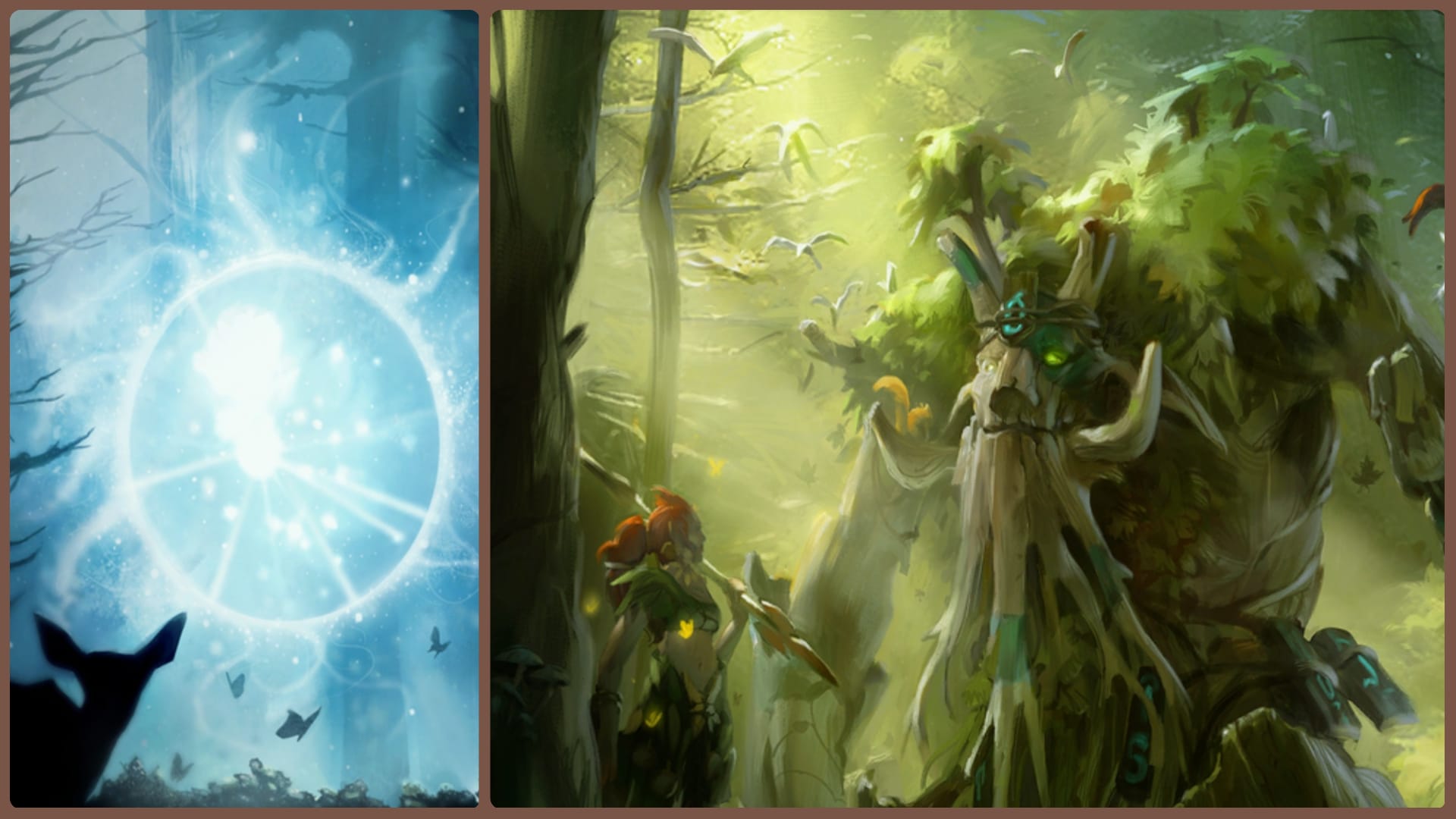 Take a look at this elaborate guide to help you win Dota 2 matches with the hardest support heroes in Cavern Crawl during Battle Pass 2022.

Battle Pass 2022 has introduced several mind-blowing treasures, sprays, item effects, and arcanas that will create a lasting impression on your friends. You can complete Weekly Quests to gather additional battle points to move forward with your Battle Pass 2022.

Cavern Crawl is now available for people with Battle Pass 2022. You can progress through Cavern Crawl to obtain new Mythical sets for Crystal Maiden, Slardar, and Juggernaut. If you struggle to complete hero challenges in Cavern Crawl, you can refer to this guide to help you finish these hero quests without any hassles. 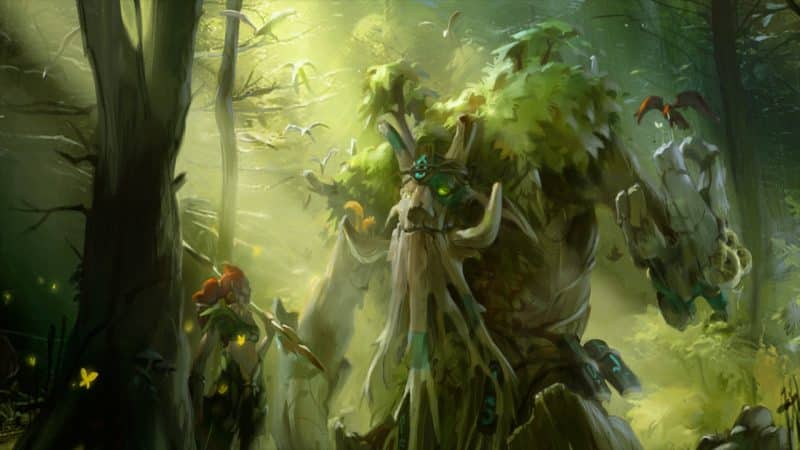 Treant Protector is a top-tier support hero in Dota 2. He has an advanced set of abilities that make him one of the hardest support heroes you can choose to play in Cavern Crawl. The melee hero can be used to root enemies during key moments in matches to disable the entire enemy team for a few seconds.

People who enjoy playing support heroes can take the safe lane with Treant Protector. The Strength hero has a base attack damage of 87 – 95. You can purchase a Quelling Blade for 100 gold for the Treant Protector to give an advantage while taking the last hits in the safe lane.

Treant Protector can pull creeps from the neutral creep camps once every few minutes. Creeps from neutral camps can be used to distract waves of creeps in the safe lane and bring enemy heroes closer to the tower before engaging them in battles.

The support hero has a base mana pool of 315 at the start of the game. It might not be sufficient to nuke enemy heroes in the safe lane. If you need more mana to cast spells early in the game, Treant Protector can walk up to the Secret Shop to collect an Energy Booster to complete Arcane Boots.

Arcane Boots will provide 250 mana to the Strength hero. While playing Treant Protector, you can also replenish up to 175 mana to all allies in a 1200 radius. Arcane Boots has a cooldown of 55 seconds.

If you’re taking more damage from enemy heroes before taking the last hits on creeps in your lane, you can buy a Vanguard to increase the durability of Treant Protector. Vanguard will cost you 1825 gold and will provide the support hero with 250 health and 7 health regeneration. Treant Protector will also gain a 60% chance to block 64 damage with Vanguard equipped in his inventory.

The melee hero can cast Nature’s Grasp to deal up to 60 damage per second (DPS) to enemy heroes for 12 seconds. Enemy units hit by Nature’s Grasp have their movement speed slowed by 35%.

Treant Protector can use Leech Seed to drain the health of his enemies. Leech Seed deals up to 64 DPS for 5 seconds. It will also heal nearby allies for 64 health per second in a 650 radius. Enemy units affected by Leech Seed will have their movement speed reduced by 26%. Leech Seed has a cooldown of 12 seconds and needs 110 mana.

The slow movement speed of Leech Seed can be increased to 15% at level 15. You can increase the DPS dealt to enemies and the health regenerated for allies by 40 at level 20. Treant Protector can nuke enemies with Leech Seed to guard his teammates while farming in the lane and in team fights.

The support hero can use Living Armor to protect his allies at any given moment in the game. Living Armor provides 12 bonus armor to his teammates and heals them for 6 health per second. You can also cast Living Armor on buildings and towers. Living Armor can target allies throughout the map and lasts for up to 30 seconds. It has a cooldown of 15 seconds and requires 50 mana.

You can equip Treant Protector with Urn of Shadows to make him a more effective support hero in the game. Urn of Shadows will grant 2 Strength, 2 Agility, 2 Intelligence, 2 armor, and 1.4 mana regeneration to the Strength hero.

Soul Release, the active ability of Urn of Shadows, can be used to deal 25 DPS to enemy units. It can also be cast on allies to heal them for 30 health per second. Soul Release gains a charge every time an enemy hero dies within a 1400 radius of its user. The effects of Soul Release lasts for up to 8 seconds. It has a cooldown of 7 seconds. Urn of Shadows can be upgraded to Spirit Vessel later in the game.

Treant Protector’s ulti, Overgrowth, can be used to root all enemy units in an 800 radius. Enemy units that are rooted take 75 DPS for up to 5 seconds. It will also prevent heroes like Anti-Mage, Clinz, Bounty Hunter, and Riki from blinking out of battle or turning invisible.

Overgrowth has a cooldown of 100 seconds and consumes 300 mana to be used in Dota 2. His ulti can’t be dispelled after reaching level 25 through the Talent Tree. Many players who specialize in playing support heroes make a Refresher Orb to disable enemy heroes for an extended duration.

Refresher Orb costs 5000 gold and can be used to reset the cooldown of all items and spells, including Treant Protector’s ulti. His vast range of skills categorizes Treant Protector among the hardest support heroes you can play in Cavern Crawl. 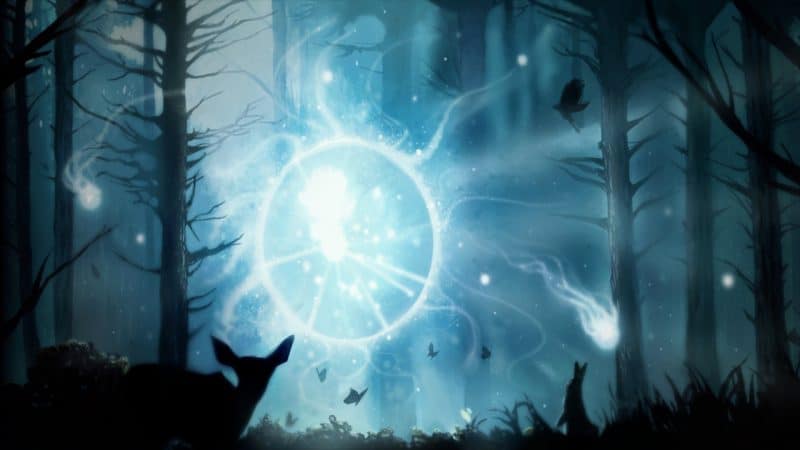 Io is a support hero with varied abilities to help its allies heal in battle and survive longer. The Strength hero has a base movement speed of 320 that lets it get to team fights on time to tilt the scales in its favor. The ranged hero has an increased projectile speed of 1200 that enables Io to use its skills at a faster rate.

You can count on Io to be a reliable teammate during battles. If you’re new to playing support heroes, Io will take some time to get used to. The support hero can use Tether to connect itself to its allies from as far as 1000 distance.

Tether provides an easy means to move Io out of danger when facing enemy heroes in battles and lanes. Io can restore health and mana to its Tethered allies. It has a cooldown of 12 seconds and consumes 40 mana to be cast.

Io can be a resourceful support hero in matches with multiple disablers in your enemy’s team. You can buy a Hood of Defiance for 1500 gold in the game. Hood of Defiance provides 18% magic resistance against incoming spells and 8.5 health regeneration to its users.

You can use Hood of Defiance to protect yourself from magical spells by activating Barrier to absorb up to 350 magic damage for 12 seconds. The magic resistance from Hood of Defiance can be doubled by upgrading it to Pipe of Insight in the game. Pipe of Insight also lets you cast Barrier on nearby enemies in a 1200 radius that lasts for 12 seconds.

Io can summon electrically-charged particles to spin around it through the Spirits ability. These Spirits get close to enemy units and explode to deal damage in a small radius. Spirits deal maximum damage of 90 per spirit. These orbs of electricity last for up to 19 seconds and explode after their duration ends by exploding into thin air. Spirits have a cooldown of 20 seconds and needs 130 mana to be cast.

Relocate, Io’s ulti, lets the Strength hero teleport itself and its tethered allies from one location to another. The Strength hero’s ulti has a cast time of 3 seconds and a return time of 12 seconds. Io and its tethered allies are teleported back to the original location after 12 seconds have elapsed. Relocate has a cooldown of 80 seconds and requires 175 mana. You can reduce the cooldown of Spirits summoned by 25 seconds after reaching level 20.

If you have a lot of Agility heroes and carry heroes in your team, you can equip Io with Drum of Endurance. Io can use Drum of Endurance to increase the attack speed of allies by 45 and their movement speed by 13% for 6 seconds. Choose Io in matches with strong carry heroes to boost their attack speed in battles to achieve victory in Cavern Crawl with the support hero.