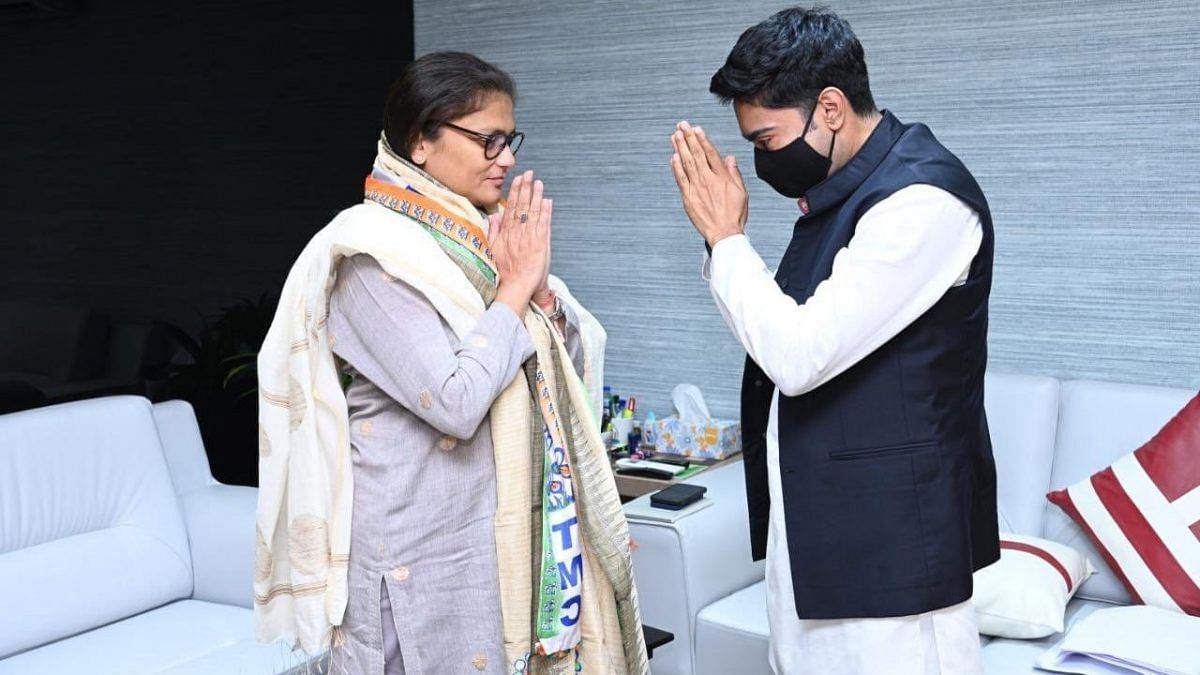 
Kolkata: The Mamata Banerjee-led Trinamool Congress’ national ambitions are seemingly being shaped in the northeast, where the party is targeting the Bengali diaspora in three states — Tripura, Assam and Meghalaya.

The induction of former Assam Congress MP Sushmita Dev is just the latest in a series of political moves that the TMC has made in the three states.

Dev, who had been with the Congress for 30 years, joined the Trinamool Monday. She is a prominent Bengali leader in Assam’s Barak Valley.

The TMC seems to be strategically mobilising anti-Modi forces in the three BJP-ruled states — West Bengal Chief Minister and Trinamool supremo Mamata Banerjee has held at least three meetings with Akhil Gogoi of Raijor Dal over the past two months in Assam, and has been engaging with Pradyot Manikya, chief of the Indigenous Progressive Regional Alliance (TIPRA), in Tripura.

Trinamool’s West Bengal general secretary Kunal Ghosh admitted that his party is serious about expanding to neighbouring states in the northeast and the eastern part of the country.

“There is a clarity in the thought process of our senior leaders, and now we know what we, as soldiers, have to do,” he said. “We will intensify our activities in these states.”

But the party has its work cut out.

It has never contested elections in Meghalaya and Assam. And in Tripura, it contested 24 of the 60 seats in the 2018 assembly elections, won none and secured a mere 0.3 per cent of the vote-share.

Analysts say the party has a long way to go before it can leave a mark in these states.

“Trinamool will not be able to make any breakthrough independently in the northeastern states. It has to either ally with local political parties or engineer defections,” Kolkata-based senior analyst Samir Das said. “Making politicians defect can be counter-productive as it happened in the case of the BJP in Bengal. Cashing in on disgruntlement of some will not help them.”

Das said it is vital for the Trinamool to tie up with local parties.

“In Assam, the TMC can be the facilitator of an Opposition front, while in Tripura it can lead the front,” he added. “The Trinamool is likely to ally with Pradyot Manikya’s TIPRA. He is a dynamic leader with a huge following and acceptance among Tripura’s indigenous tribal population.”

For now, however, the Trinamool appears to be making the right moves. The three states it has picked have a Bengali presence.

According to the 2011 Census, around 65 per cent of Tripura’s population is Bengali, while the number is 28 per cent and 9 per cent for Assam and Meghalaya, respectively.

Apart from the Bengali population, Trinamool MP Dola Sen, who has been travelling to Tripura regularly, said the party has another ace up its sleeve — possible tie-ups with groups representing indigenous people in these states.

“I have been to Tripura twice in the past few days. The first time I led a door-to-door campaign in north Tripura, and, this time, I travelled across south Tripura,” he said. “We are getting a positive response from common people. Many local leaders are contacting us. They are almost disgusted with Modi babu’s policies and his government. This is not only specific to Bengali-dominated areas in Tripura; we are getting a good response from Assam and some other northeast states too.”

Dev’s induction has also revealed the party’s ambitions. Not only was Dev an MP, her father, the late Santosh Mohan Dev, was elected to the Lok Sabha from both Assam and Tripura, and was also a Union minister.

She told the media Tuesday that she has joined the TMC unconditionally, and was open to working in any role that was assigned to her.

“Dev has a significant following among Bengalis in Barak valley. This is a positive thing that a front is being built by the anti-Modi groups in Assam,” he told ThePrint. “Mamata Banerjee is a great leader and she will have a good chance in Tripura in the upcoming elections. Assam is a bit complex as it has 135 ethnic groups. But if Trinamool ties up with local indigenous groups, it will have good political scope here too.”

The TMC appears to be taking a leaf out of the BJP’s playbook in its expansion. In Tripura, for instance, senior leaders, including MPs, ministers and unit heads, have visited the state and then posted visuals of alleged attacks by members of the ruling BJP.

The BJP had similarly alleged attacks in West Bengal ahead of this year’s assembly elections.

Political opponents, however, say they are not unduly worried.

“These tricks and drama won’t work. They are trying to take the violent nature of their politics to these states,” BJP’s Bengal president Dilip Ghosh said. “The Tripura government is giving security, bullet-proof vehicles to their leaders and ministers, and they are questioning democracy there.”

Tinku Roy, BJP’s state secretary in Tripura, echoed Ghosh. “The Trinamool tried a lot, but failed. They are facing people’s resistance. Nobody wants the Trinamool brand of political violence here.”

Gaurav Gogoi, deputy leader of the Congress in the Lok Sabha and a two-term MP from Assam, played down Dev’s induction in the TMC.

“Sushmita Dev’s decision to join the Trinamool Congress will not have any impact on Assam’s politics or its population,” he said. “In fact, Congress was underperforming in the panchayat and Lok Sabha elections in Barak Valley and other parts, where she was in charge.”

“It is the Trinamool’s prerogative to venture into Assam or any other NE state. It is highly unlikely that Trinamool will play a role in Assam or in any NE state,” he added. “In Tripura, they might have a limited role, but it won’t be possible in Assam. These are all diverse and complex states in terms of their indigenous population.”