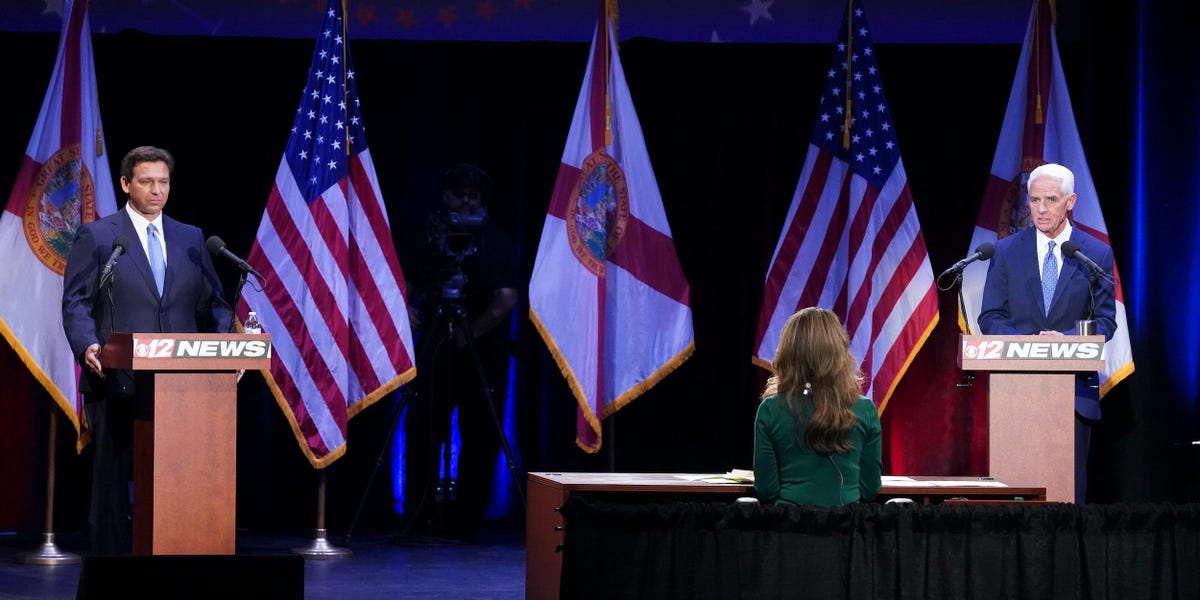 FORT PIERCE, Florida — Republican Gov. Ron DeSantis and Democrat Charlie Crist, a former congressman, faced off Monday in their lone debate before the election to decide who will lead Florida over the next four years.

DeSantis has become a fan favorite to run for president in 2024, particularly if former President Donald Trump doesn’t run again. Republicans have an advantage in Florida because they’ve out-registered Democrats by 270,000 people in the state, and DeSantis also has significantly outraised Crist, who was a Republican governor from 2007 to 2011.

The debate Monday was Crist’s main chance to try to close the gap in polling, which favors DeSantis. Throughout the debate, the audience cheered for both sides. Liz Quirantes, the debate moderator from CBS12, repeatedly told the audience not to cheer, but they ignored her.

Here are the main takeaways from the night, hosted at the Fort Pierce Theatre:

During the debate, Crist accused DeSantis of being motivated more by his future ambitions than by a desire to be governor of Florida. At one point, he asked DeSantis directly whether he’d commit to serving all four years, even though both candidates had agreed to debate rules that they may not ask each other questions.

DeSantis paused and then asked the moderator whether it was his time to speak.

“I know Charlie wants to talk about 2024 and Joe Biden, but let me be clear: The only worn-out old donkey I want to put out to pasture is Charlie Crist,” he said, referring to the political symbol for Democrats.

The retort had the effect of dodging the question while bashing President Joe Biden, who will be 80 in a month, and Crist, 66, in the process. DeSantis, 44, is the youngest governor in America.

Crist tried to steer the conversation to abortion

Democrats are hoping to make inroads with voters after the Supreme Court overturned Roe v. Wade, the 1973 ruling that guaranteed a national right to abortion. Crist is no exception, vowing to protect abortion rights. He raised abortion rights several times throughout the debate before the moderator asked about it.

“You’re talking about all these other issues because you dont want to talk about a woman’s right to choose,” Crist told DeSantis at one point.

DeSantis signed a bill into law this year that makes it illegal to have an abortion after 15 weeks into a pregnancy, including in cases of rape and incest. He did not directly answer a question about whether he’d seek to limit abortion further if given a second term.

Florida’s law is being challenged in court.

On the campaign trail, DeSantis rarely says Crist’s name. When the two faced off on Monday, he referred to Biden’s policies on everything from economic to energy policy as the “Biden-Crist” policies. Crist, he said, frequently voted with Biden.

DeSantis’ frequent criticisms of Biden are just one reason that many in political circles believe the governor will seek the White House in 2024. Biden also lost Florida to Trump in 2020. Trump won the state in 2016, too, but made inroads four years later.

Crist on Monday called out DeSantis for his focus on the president. Crist has openly supported and embraced Biden, and the president is scheduled to campaign with Crist in Florida on November 1.

Crist cast himself as a unifier

Crist has messaged his campaign similarly to the way Biden did in 2020 — framing himself as someone who is a unifier and has experience. The implication he’s working to get across is that he views DeSantis as a MAGA Republican and that he can defeat DeSantis the same way Biden defeated Trump.

Crist cast DeSantis as a “bully” throughout the debate. He alluded to when DeSantis told college students at one of his events in March to take their face masks off, saying “we’ve got to stop with this covid theater.”

“We know you love to bully people,” Crist said of the exchange, which went viral.

He accused DeSantis of trying to “whitewash” the state’s approach to education by limiting certain instructions about race and of using migrants as “props for your political gain” when he sent them from Texas to Martha’s Vineyard, Massachusetts.

“You need to lead by uniting people not dividing them,” Crist said. “He talks about dividing us all night long. It’s what he does. It’s who you are. It’s what he’s about.”

The only issue Crist and DeSantis agreed on was that that the Parkland gunman, who killed 17 people at a high school in Florida, should have been sentenced to death.