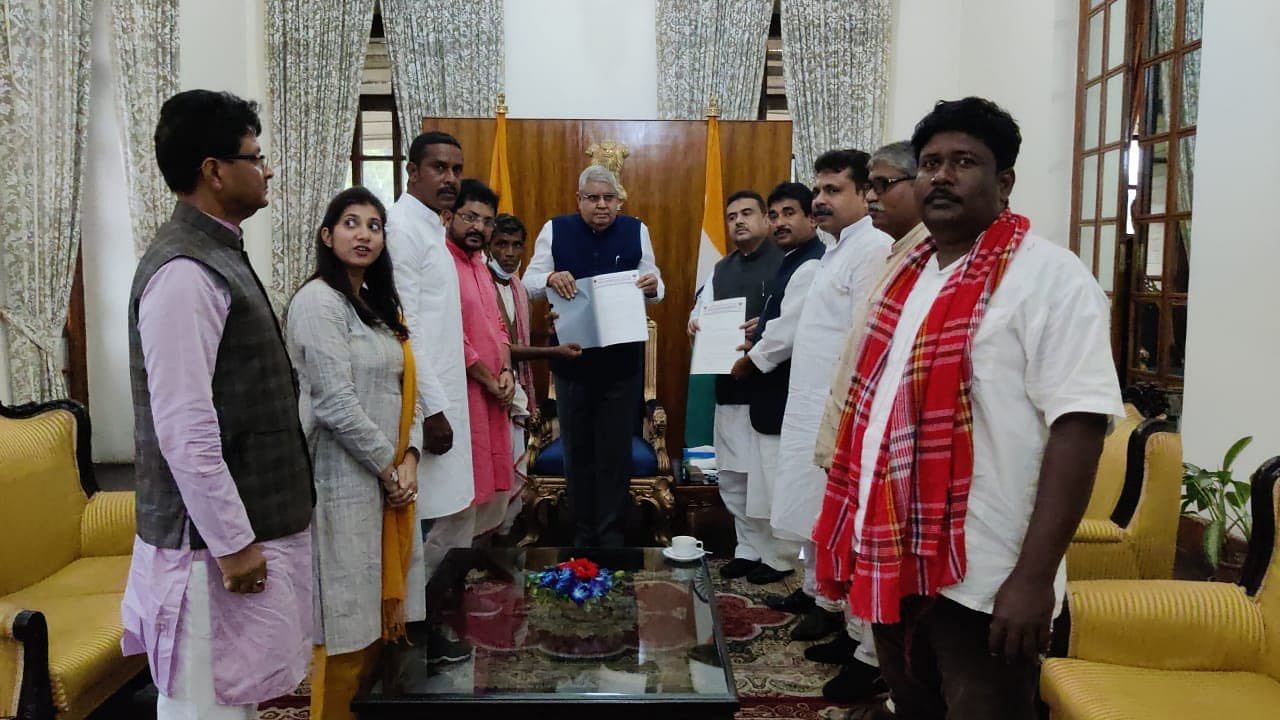 
Kolkata: The BJP in West Bengal is all set to corner the Mamata Banerjee government over its alleged apathy towards the plight of farmers in the state.

It plans to hold a three-day agitation in Singur, a town synonymous with Mamata’s most prominent political battle. It is in Singur that the historic anti-land acquisition movement took place in 2006, which catapulted her to the throne of West Bengal, dismantling a 34-year-old CPI(Marxist) regime.

Speaking to reporters outside Raj Bhavan, Adhikari had said, “We will hold a three-day agitation in Singur along the highway with farmers to bring the government’s attention to the farmers’ issues. If within 72 hours, the Mamata Banerjee government doesn’t respond, we will escalate our protests further.”

Also Read: Lesson from year-long protest: No govt, not even Modi-led BJP, can afford to annoy farmers

In its memorandum submitted to the Governor, the BJP claimed that West Bengal has witnessed “a number of farmer suicides…in the last few days”.

“Farmers are under severe distress due to the collapse of the government in the agricultural sector,” it further said.

On Saturday, Adhikari had tweeted a demand that funds be disbursed instantly to “reduce the plight of farmers”.

“WB govt hasn’t even made efforts to meet families of the farmers who died by suicide lately…” he had alleged.

BJP Kisan Morcha chief Mahadev Sarkar claimed that three farmers had taken their lives in the state in the past four months. He told ThePrint: “Between September and December at least three farmers have committed suicide in West Bengal. One from Naxalbari, one from Malda and one most recently in Ghatal, in the aftermath of losses incurred due to cyclone Jawad.”

However, Pradip Kumar Majumdar, advisor (agriculture) to the CM, dismissed the claims outright. “Financial assistance to farmers under Krishak Bandhu Scheme has been doubled. Farmers in Bengal have free crop insurance under Bangla Shasya Bima Scheme in case they face losses due to climatic conditions. The BJP has been bluffed by their own Prime Minister who made tall promises to farmers of Bengal during the election campaign. PM Kisan Samman Nidhi Yojana is yet to reach all the 42 lakh farmers who were enrolled,” he told ThePrint.

The BJP’s memorandum also sought free of cost seeds and fertilizers, ex-gratia of Rs 20 lakh to the kin of farmers who had allegedly died by suicide, compensation packages for affected farmers, minimum support price (MSP) for farm produce, reduction in electricity tariff and reduction of value-added tax (VAT) on fuel to ease transportation cost.

After the meeting, the Governor posted on Twitter: “Due to the apathy towards plight of farmers, BJP Kisan Morcha is forced to start agitation from December 14 in Singur.” He tagged the chief minister in his statement.

The agitation comes at a time when the West Bengal BJP is still trying to find a footing in the state after its defeat in the state Assembly elections in May.

It is also happening at a time when farmers are retreating from the Delhi borders, ending their year-long agitation against the Narendra Modi government at the Centre after it withdrew the three farm laws on November 19. The opposition including Mamata’s Trinamool Congress (TMC) had targeted the BJP hard over the issue.

That BJP’s planned agitation in Singur is significant as the town occupies a pivotal place in Bengal’s political history. Barely 45 km from Kolkata, Singur was picked by Tata Motors to set up the first Nano car manufacturing factory in the country. However, it met the ire of Mamata Banerjee as 400 acres of agricultural land were being allocated by then chief minister Jyoti Basu to set up the production hub.

Mamata sat on a 25-day hunger strike till Tata Motors came to the table and announced the withdrawal of the project that was set to boost West Bengal’s industry sector. During this agitation, Mamata had alleged that she was assaulted by state police. Singur became the political epicentre in West Bengal as many political leaders including Congress’ Sonia Gandhi and then BJP president Rajnath Singh came to Mamata’s support.

The TMC was quick to mock the BJP’s plan to agitate in Singur next week. TMC MP Sougata Roy told ThePrint, “BJP has no issue at hand, they lost the elections and have seen the support for the TMC, which has rattled them. Mamata Banerjee has returned the agricultural land to the farmers in Singur and kept her promise. No farmer will support Suvendu’s (Adhikari) grand plans. They are doing it only to get media publicity.”

All India Kisan Sabha leader and CPM leader Hannan Mollah told ThePrint, “It’s all drama, the BJP has never supported farmers’ agitation, for one year we saw how farmers were ignored. But the situation of farmers in West Bengal isn’t good. Mamata Banerjee has refused to even accept farmer suicides in the state. Both TMC and BJP don’t care about farmers except for political points.”

Also Read: With barren land and no jobs, Singur now wants industry — and another ‘poriborton’ in Bengal