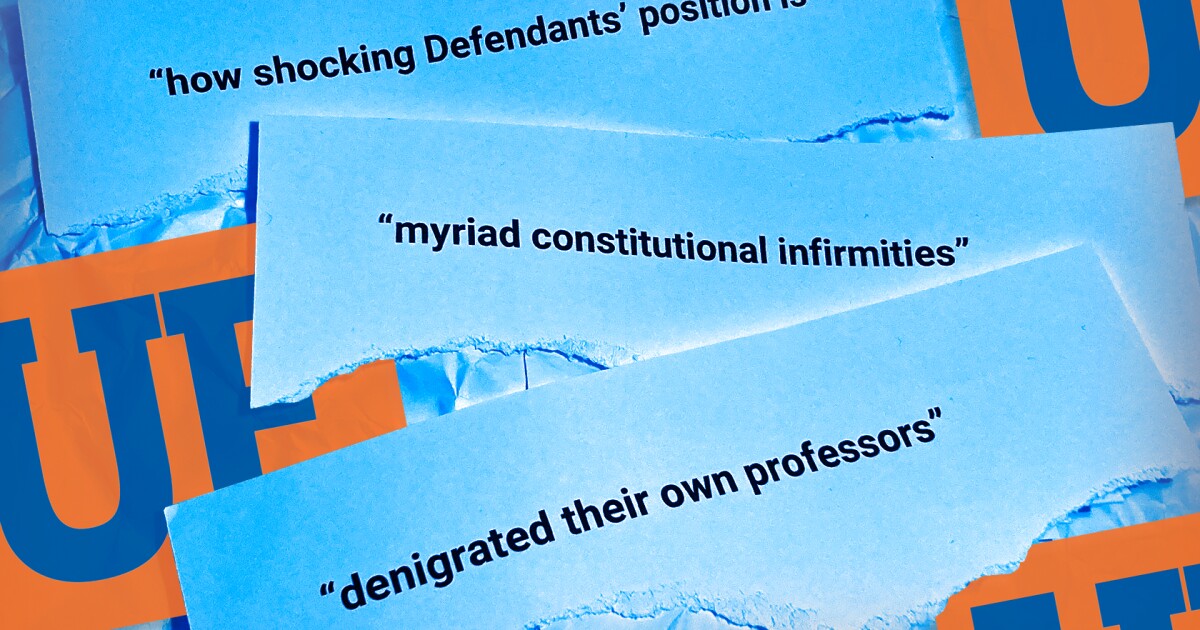 In a blistering opinion on Friday, a federal judge ruled that the University of Florida may not block professors from testifying against the state under the institution’s conflict-of-interest policy. The decision is the latest turn in a closely watched case that arose from concerns that the university, in barring professors from testifying in a voting-rights case, had violated the faculty members’ First Amendment rights and infringed on academic freedom.

For the time being, the judge ruled, UF may still enforce a policy that, in some cases, allows it to prohibit faculty members from citing their university affiliations when serving as expert witnesses. Also left standing is the university’s conflict-of-commitment policy for outside work.

The university came under fire in late October after The New York Times first reported that administrators, applying the university’s conflict-of-interest policy, had blocked professors from serving as expert witnesses in litigation against the state. Doing so, professors were told, would be “adverse to UF’s interests.” Within days, amid a blizzard of criticism, the university reversed its decision and said the professors were free to testify.

In November, W. Kent Fuchs, the university’s president, accepted a task force’s recommendations that the policy be revised to reflect a “strong presumption” that UF will approve requests from faculty and staff members to testify as private citizens in litigation that involves the State of Florida, “regardless of the viewpoint” of the testimony. The university would deny requests only if there were “clear and convincing evidence” of a particular harm that the testimony could bring to UF.

In his 74-page ruling, Walker sided with the plaintiffs, saying that the policy contains “myriad constitutional infirmities.” The revised policy is nothing more than a “dolled-up version of the same old conflict-of-interest policy,” the judge wrote, and the university has still never “disavowed” its original policy.

The controversy has brought undeniable reputational damage to UF, a university that has risen in rankings and prestige in recent years. Given that, Walker suggested, it is significant that the university has stuck with a policy that would still allow the restriction of professors’ work in politically controversial cases. “Consider the costs UF is willing to bear to maintain its power to discriminate based on viewpoint,” Walker wrote. “It is willing to suffer threats to its accreditation, congressional inquiries, unrelenting bad press, an all-but-certain hit to its rankings, and the substantial monetary cost of hiring an experienced D.C. firm to defend its policy. The only thing UF will not do, it seems, is amend its policy to make clear that it will never consider viewpoint in denying a request to testify.”

Even now, the judge said, the professors “are self-censoring because of UF’s policy, and I find that their chilled speech stems from reasonable fears that the policy will be enforced against them moving forward.”

‘Denigrated Their Own Professors’

The plaintiffs include Sharon Wright Austin, Michael McDonald, and Daniel A. Smith, the three political-science professors who were initially barred from testifying. Joining them are Jeffrey L. Goldhagen, a pediatrics professor, and the law professors Kenneth Nunn and Teresa Reid.

In an opinion that referenced Communist China, Walker sounded baffled at times by arguments the university had put forward in defense of its policy. UF claimed to have “unlimited discretion” to restrict professors’ speech if it determined the speech “would harm an ill-defined’ ‘interest’ of the university.”

“It’s worth pausing to note just how shocking the defendants’ position is,” the judge wrote.

Walker, who earned his bachelor’s and law degrees from UF, has in two previous public hearings on the case engaged in prickly exchanges with the university’s lawyers. Last week the judge suggested that H. Christopher Bartolomucci, a partner at a firm in Washington D.C., representing UF, had been “squirrely” in his defense.

In his opinion, the judge blasted the university for taking the “remarkable position” that professors might not have a First Amendment right to testify about topics related to their expertise against the state while working at UF. In so arguing, Walker wrote, university officials had “denigrated their own professors as being no better than two-faced mercenaries when they seek to testify as experts in their field in cases challenging Florida law.”

David A. O’Neil, a lawyer representing the professors, said in a written statement that the decision was a boon for free speech and academic freedom.

“Today’s decision is a ringing endorsement of the critical importance of faculty free speech and academic freedom to the health of our democracy,” he said. “The university may no longer prohibit faculty members from sharing their views with courts and the public just because the ruling political party doesn’t want to hear their truth. The decision sends a clear message to public universities across the country — and to politicians who would try to interfere with them — that they too must honor the constitutional principles that make the college campus a vital engine of a free society.”

Asked for comment, Steve Orlando, a university spokesman, said in an email to The Chronicle that “we’re reviewing the order and will determine our next steps.”

Apart from its effect on university policy, the judge’s ruling preserves for posterity and formalizes one of the central criticisms of the university’s handling of the case: UF has still never said it did anything wrong. Fuchs, the president, reversed course, Walker wrote, only “when the onslaught of bad press refused to ebb.”

“It was not until the wider world caught on to what was happening,” the judge said, “that the muzzle was lifted.”