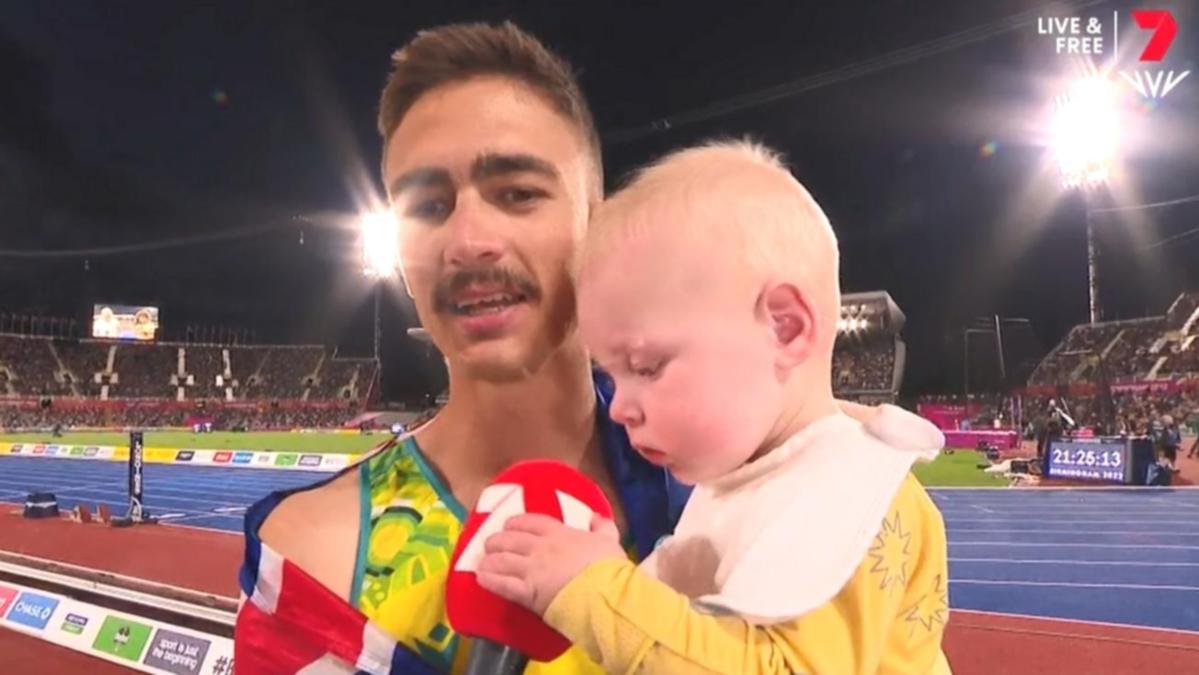 The 28-year-old defending champion pushed through a nagging bruised heel to claim second – an emotional result with his wife Laura and parents in the stands.

Watch the interview in the video above

Elated with the outcome, Starc was even more excited to be reunited with his family after Laura held down the fort in recent weeks.

He completed a lap of Alexander Stadium with eight-month-old Oli – decked out in a yellow suit to support dad – in his arms before receiving his medal.

“He’s a champion,” Starc said as his curious son, yet to say his first word, tried to grab the mic and join in.

Australian para-sprinter Evan O’Hanlon sung from a similar sheet when he appeared on Channel 7’s Sunrise to celebrate back-to-back golds in the 100m T38.

His daughter Ursula was just eight weeks old when he won the event at Gold Coast 2018, but is now four years old with a two-year-old brother Alfred in tow.

“I didn’t run as fast as I would like to run but I was able to get out and do it in front of my kids,” O’Hanlon said.

“Hopefully they can remember this one.”

EVERY EVENT: Check out the full Commonwealth Games schedule

MEDAL TALLY: Every gold, silver and bronze at Birmingham 2022

LATEST RESULTS: Detailed breakdown of every event at the Games

O’Hanlon said he would reunite with his family again before the medal ceremony, with Alfred’s health at the front of his mind.

“It’s been pretty tough being away from the kids so much,” he said as the boy rubbed his dad’s face.

“I’ve been away for the last month pretty much and then Alfred was in hospital with bronchitis and then woke up this morning with conjunctivitis as well. So he’s doing his best to not be here tonight.”

Brandon Starc took silver from New Zealand’s Hamish Kerr on countback after both nailed 2.25m jumps but could not clear 2.28m.

“That was tough. That was probably the toughest comp I’ve ever had,” Starc told reporters.

“I had to withdraw from world champs because of the bruised heel and throughout that comp, besides maybe the first jump, I was feeling every bit of that bruised heel.

“I was taking my shoe off, trying to get some sort of relief, taping it here and there but really I just had to grit my teeth and jump through it.

“I don’t know what it was, I don’t know if it was family or if I just wanted something really bad and I kind of just jumped through it and somehow I got a medal.”

Starc failed to clear 2.15m on his first attempt while his first and second attempts at 2.19m also went south.

When he missed his first crack at 2.22m, Starc lay for a good 30 seconds with his face firmly in the mat and later admitted it was a mix of frustration and pain.

But he pushed through the pain barrier to launch himself over 2.25m and seal a top-two finish.

“I could easily have just rolled over and gave up or just pushed through it and tried to do something,” he said.

Starc said the additional recovery time gained from skipping the world championships gave him just enough breathing room to be competitive in Birmingham.

“World champs was just way too soon,” he said.

“The three weeks that I did have between, I made a lot of progress with my heel and to jump here with that much pain, I definitely couldn’t have done anything decent or half-decent in Eugene.”

Athlete collapses at the Commonwealth Games after ‘extravagant’ and ‘unnecessary’ act