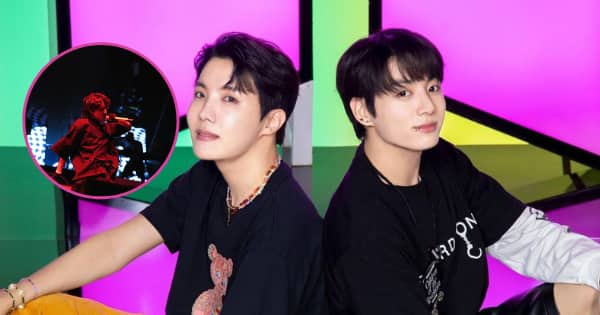 BTS member Jungkook aka Jeon Jungkook is trending big time on Twitter right now. And it is because he has finally ended the Instagram drought. Jungkook commented on J-Hope‘s super successful Lollapalooza concert post that he shared on his Instagram handle. Jungkook praised his hyung for the super show at the Chicago concert. J-Hope really killed it at the Lollapalooza and ARMY had turned up in huge numbers for the BTS rappers’ concert. Jungkook finally cheered on his hyung by commenting on his post. BTS ARMY is trending JUNGKOOK CAME HOME on Twitter. Also Read – BTS: J-Hope’s emotional moment at Lollapalooza moves Armaan Malik; fans thank him for the shout-out

J-Hope aka Jung Hoseok shared a couple of candid shots of himself from the Lollapalooza concert and penned a heartfelt note thanking everyone who was associated with bringing his act together. Hoseok had said he was very nervous and felt that performing for over an hour without any of the band members. He called it a dread-filled dream. J-Hope also thanked his friends who came to support him – Becky G and Jimin at the Lollapalooza concert. He also thanked the ARMYs for making it so memorable for him. Ever since solo career announcement, fans have seen the boys cheer on each other. But this time, Jimin was the only member who was present. Though he provided the energy of the rest of the members. We bet the rest of the members would have had schedules because of which they didn’t attend the concert. And now, Jungkook aka Jeon Jungkook has extended his support to his hyung by commenting on his post. When loosely translated, the Left and Right hitmaker comment read, “You are awesome/ Cool J-Hope.” Check out Hobi’s post and Jungkook’s comment below: Also Read – BTS: J-Hope fans spot Korean top model Irene Kim at Lollapalooza; here’s what we know of their beautiful friendship

Jungkook and J-Hope are currently trending big time in Hollywood News. As soon as Jungkook commented on Hobi’s post, ARMYs went crazy on Twitter. Well, it’s been ages since Jungkook has been online, interacting with the ARMYs. BTS’ Jungkook used to be super active until a couple of months ago. Jungkook would conduct AMAs on Instagram and respond too. Guess he’s busy working very hard on his solo project. Anyway, check out BTS ARMY’s reaction to his Instagram return here:

JUNGKOOK HELLO WE MISS U https://t.co/n1fjRMWZxi

JUNGKOOK CAME HOME AND NO ONE TOLD ME https://t.co/SCOzhVFD3o

Jungkook came home to tell how cool hobi is? pic.twitter.com/H3eKyiuV20

JUNGKOOK CAME HOME TO SAY THAT HOBI DID AMAZING?!?! ??

Meanwhile, J-Hope and Jimin are still in America. J-Hope has won a lot of hearts with his concert and the Jack In The Box album. Now, the solo projects of RM, Jin, Jimin, Taehyung, Suga and Jungkook are awaited.