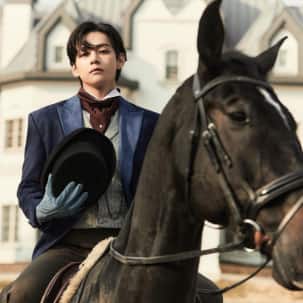 Big Hit has been releasing the Bangtan Boys – RM, Jin, Suga, J-Hope, Jimin, Taehyung and Jungkook‘s special Photo-folio series. They have been releasing the pictures in the booklet forward. Up until now, we have seen Jungkook, RM, Jimin and Jin’s special 8 Photo-Folio series. And now, the BTS ARMY is treated to Kim Taehyung aka BTS V‘s special Photo-Folio. The visual king has donned the equestrian role it seems. The Run BTS hitmaker seems to have doled out a victoria era photoshoot. ARMY is going gaga over BTS V’s photoshoot and how! Also Read – BTS: Kim Taehyung aka V to feature in a variety show with two of the Wooga Squad members? Here’s what we know

Hollywood News will be bowled over with the photoshoot of Kim Taehyung. Taetae’s special shoot is called Me, Myself, and V ‘Veautiful Days’. Big Hit Entertainment also dropped the teaser of Kim Taehyung’s photo folio. The Christmas Tree singer is seen in Victoria-era styled clothes. He has a pocket watch, old hard-bound books, and striped suits. Taehyung has been fond of horse riding as well and has settled in the role of an equestrian for the photoshoot. Also Read – BTS: V aka Kim Taehyung and Jungkook ace the Run BTS TikTok trend; Big Hit Music reveals their hidden talents

Kim Taehyung looks very handsome in each of the pictures as always. He has also posed on a bed with flowers. He has childlike energy with which he is seen jumping up and down on the bed. There are three teasers of BTS V’s special 8 photo-folio. He is also seen in a white suit and a hat. Also Read – BTS: Kim Taehyung aka V gets mobbed by ARMYs as he returns home; pens a note saying, ‘I always get worried…’

BTS ARMY is going gaga over Kim Taehyung and his gorgeous victoria-themed and equestrian-themed photoshoot. They have been sharing the pictures online and crushing over Taetae. It’s as if he has set a thirst trap but this one is a time travel one. Check out the tweets here:

KIM TAEHYUNG. ISTG DO SOMETHING WITH YOUR FACE DUDE!! PLZ STAPH MAKING MY STANDARD FOR MEN GO ????

kim taehyung looks like a dream, the prettiest prince i’ve ever seen pic.twitter.com/jagOeO9P4c

Are u even real kim taehyung or am I hallucinating.? pic.twitter.com/LdR19Ricny

I guess I’ll go d!e now, dude has biased wrecked me since the beginning and my loyalty continues to be tested by Mr Kim Taehyung.

WHAT WAS THE REASON TAE??? pic.twitter.com/UkvFG1VEqu

Meanwhile, as per k-media reports Taehyung is shooting for a variety show with Park Seojoon called Seo Jin’s. The series might roll out earlier next year.