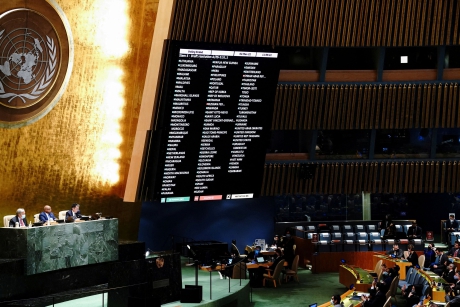 Canada was one of 50 countries that voted against a United Nations General Assembly resolution condemning the glorification of Nazism and neo-Nazism.

Canada was joined by the US, UK and all of the NATO members, including Germany. Another 10 countries abstained.

NATO diplomats insist they aren’t soft on fascism, but voted “no” because the resolution was sponsored by Russia and was based on “misinformation” related to the war in Ukraine.

It is not misinformation that far-right forces are growing in Europe and have come to power in countries like Hungary and Italy. Fascist politicians like Italy’s new prime minister Giorgia Meloni have literally been embraced by their NATO allies, including Justin Trudeau.

For those who shrug off this disgraceful vote as wartime jockeying, consider this. The same resolution came to a UN first committee vote over 2 years ago, before the invasion of Ukraine. At that time the US still voted against and NATO allies like Canada abstained.

We should be turning up the heat on the Trudeau Liberals and ask why they consistently refuse to condemn fascism.