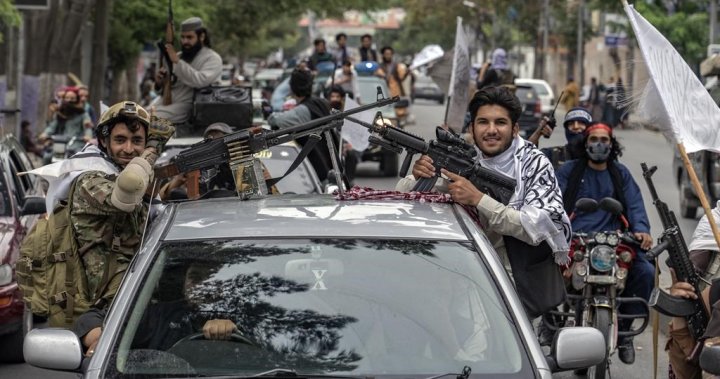 Canada’s domestic spy agency warned the government in October that the Taliban’s return to power in Afghanistan could increase the risk of religiously motivated extremism in Canada, documents reviewed by Global News suggest.

Additional newly released documents also suggest Canadian government officials were caught off guard by the speed of the Taliban’s takeover last summer, although the terrorist organization’s resurgence was seen as a foregone conclusion by Canadian intelligence officials as early as May 2021.

A year into Taliban rule, Afghans fear Canada has left them behind

“Should Western forces withdraw (from Afghanistan), the Taliban would likely decisively defeat the (Afghan security forces) and capture most major urban areas, and re-establish Taliban control over most of Afghanistan,” read a briefing note for then-defence minister Harjit Sajjan, prepared by Canadian military intelligence.

The Taliban would go on to seize Kabul, the Afghan capital, three months later on Aug. 15, 2021. The speed of the Afghan government’s collapse surprised Western intelligence and defence officials, including in Canada.

In October, the Canadian Security Intelligence Service (CSIS) warned Public Safety Minister Marco Mendicino that Afghanistan could become a hotbed for extremist organizing, and that so-called “extremist travellers” returning to Canada could increase the risk of religiously motivated extremism domestically.

“The evolving situation in Afghanistan and (the) take-over by the Taliban, a listed terrorist entity, has potentially created a safe haven and base for other extremist organizations, as well as a destination for Canadian extremist travellers,” the briefing document reads.

In a letter to Mendicino, CSIS Director David Vigneault warned that “religiously motivated violent extremism” remains a concern for Canadian officials, “especially with the Taliban regaining control in Afghanistan and the continued prospect of returning extremist travellers.”

The briefing, which is partially censored, said the Taliban’s return to power will “destabilize security in the region” and would “likely attract other insurgent groups.”

Less than ten months after Vigneault’s warning, U.S. President Joe Biden announced that America had killed al-Qaida leader Ayman al-Zawahiri with a drone strike in Kabul. Biden hailed the killing as justice for the September 11, 2001, attack on New York City, in which al-Zawahiri played a central planning role along with Osama bin Laden.

A total of 158 Canadian soldiers died during the Afghan war, with thousands of Canadian Forces members wounded since the first troop deployments in 2002. Canada formally ended its military mission in Afghanistan in 2014.

The May 2021 military intelligence documents, which were obtained by Global News under access to information laws, came at a time of some uncertainty about the continued presence of foreign troops in Afghanistan.

At the time, the U.S. and its NATO allies had until May 1, 2021, to withdraw their troops from the country — a condition of a peace deal concluded in February 2020 between the Trump administration and Taliban officials.

U.S. signs peace deal with Taliban in effort to end war in Afghanistan

In its assessment, the Canadian military warned that a complete troop drawdown by May 1 would have “severe security implications” for Afghanistan, and suggested that “the Taliban would likely realize a complete military victory over the Afghan government.”

Canadian military officials cautioned that the Taliban and other non-state actors, including the Haqqani Network and al-Qaida, would likely target foreign forces in an effort to pressure them to withdraw. Over the next few months, the Taliban offensive would force Canada to hasten the exit of personnel from Afghanistan.

Religiously motivated extremism inspired by groups like Daesh or al-Qaida has taken a back seat in Canada’s national security discourse due to the rise of what CSIS calls “ideologically motivated violent extremism” (IMVE). That includes far-right and white supremacist groups that have proliferated and gained prominence in Canada, the United States and Europe over the last decade.

But the October 2021 CSIS briefing makes clear that the agency still views religiously motivated extremism as a “persistent” threat to Canada’s national security, including the threat of extremists gaining training and resources while fighting abroad and then returning to Canada. So-called “lone wolf” attacks, where a person is motivated to violence largely in isolation, are also a concern for the agency.

“Similar to (ideologically motivated) actors, there is an increasingly robust online (religious extremist) presence able to inspire attacks, which can be planned and executed with little warning,” the document reads.

“While the threat of (extremist travellers) is not exclusive to the (religiously motivated extremism) milieu, there are Canadians with a range of training and experience acquired while abroad that make them an especially dangerous threat to national security, particularly if they return to Canada.”

It wasn’t the first time CSIS warned the government about the situation in Afghanistan. In May 2019, CSIS published a report that suggested if the U.S. withdrew before a final agreement on a transitional government was concluded, “the government of Afghanistan could collapse quickly.”

The report described the government in Kabul as “weak,” riven with “endemic corruption, factionalism and economic failure.”

Despite the earlier warnings, Canadian officials appeared to be taken aback by the speed of the Taliban’s offensive. By July 2021, David Morrison, then Prime Minister Justin Trudeau’s foreign and defence policy advisor, told Trudeau that the situation on the ground had “deteriorated significantly” after the accelerated U.S. withdrawal.

Afghanistan is a ‘disaster’ after a year of Taliban rule. What does the future hold?

“The Afghan government is in a far more precarious state than it was even a month ago and there is now speculation that it could fall in a matter of months,” the memo to Trudeau read.

Trudeau was candid last summer about the challenges that Canada faced in its evacuation efforts, describing the situation as “extremely fluid.”

“The Taliban has taken control of approaches to the airport, which is making it extremely difficult for people to get to the airport in order to get out,” Trudeau told reporters at a campaign stop on Aug. 17 in Markham, Ont.

Just days later, he defended his government’s response to the crisis, including evacuation efforts in Kabul.

“The situation in Afghanistan on the ground has gotten worse, much more quickly than anyone expected,” he said. “And that’s why we are redoubling our efforts to be there to do that work.”

Canada’s evacuation mission in Kabul ultimately came to an end on Aug. 26, 2021.

In a 2021 year-end interview with Global News’ Ottawa bureau chief Mercedes Stephenson, Trudeau conceded that his government’s efforts weren’t enough to “stave off the humanitarian tragedy” of the Taliban’s takeover.

The Liberal government has been under pressure to speed up their pledge of resettling 40,000 Afghan refugees, including many who worked with the Canadian Forces in Afghanistan. According to the latest figures from Immigration, Refugees and Citizenship Canada (IRCC), a total of 17,590 have arrived in Canada since the Taliban’s takeover.

That number includes 7,310 Afghans who previously assisted the Canadian government, fewer than half of the 15,265 who have applied.

In a statement, CSIS said the agency works closely with the RCMP to inform possible criminal investigations into Canadian “extremist travellers” who return to Canada and are believed to pose a threat to national security.

“The mobilization of Canadians abroad to participate in armed conflict is neither new, nor an aberration, nor a threat emanating exclusively from religiously motivated violent extremist. Canadians with a range of training and experience acquired while abroad makes them a threat to national security,” wrote CSIS spokesperson Brandon Champagne in a statement to Global News.

— With files from the Associated Press.