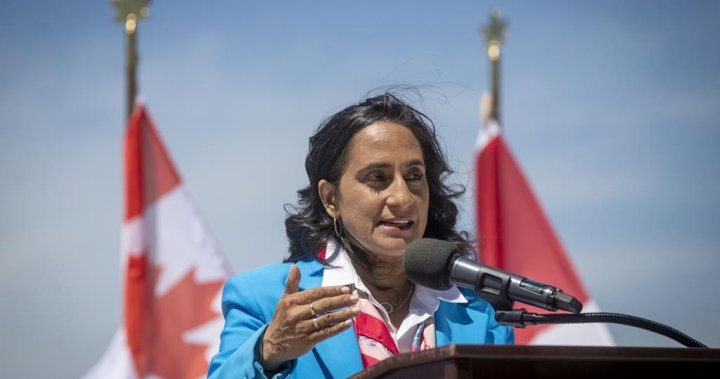 Defence Minister Anita Anand says Canadian Forces members will train Ukrainian soldiers in the United Kingdom in an effort to bolster their fight against the Russian invasion.

In a press conference on Thursday, Anand called the invasion a “direct” attack on the rules-based international order and one that is extracting a heavy cost on Ukrainians fighting for their freedom.

“When we paused our military training and capacity-building training in Ukraine under Operation Unifier in early February, I made a commitment to resume these operations,” Anand said.

“We are fulfilling our promise to resume large-scale training under Operation Unifier.”

Up to 225 Canadian military members will go to the U.K. to train new Ukrainian military recruits, she said, adding that the world is now entering “a new and very dangerous phase of this conflict” as Russian President Vladimir Putin attempts to cause “long term damage” on Ukraine.

Canadian trainers will depart next week, Anand added, and said it will also include training on front-line combat and the rules of combat under international law, calling the program “extensive.”

0:23
Doctor at hospital near Ukraine’s front lines surprised with visit from husband

The Canadian Press also reported on Thursday that training support will focus on teaching Ukrainians how to use the four M777 howitzers that Canada donated earlier this year, as well as cyber assistance through Canada’s electronic spy agency, the Communications Security Establishment.

Anand said that Canada has now reached an agreement with General Dynamic Land Systems, a Canadian manufacturer of light-armoured vehicle and promised vehicles for Ukraine will arrive off the assembly lines in the coming weeks.

“Our adversaries are watching us closely, eager to see cracks in our solidarity …. and they may think the NATO alliance can be divided. But we are more united than ever in our support of Ukraine,” Anand said.

“The resumption of Operation Unifier is just one example of this support.”

The move follows the return on Sunday of 150 Canadian soldiers who were first deployed to Poland in April to help with a flood of Ukrainian refugees flowing over the border.

Canada first launched a mission, along with Britain and the United States, to help train the Ukrainian military after Moscow ordered the annexation of the Crimean peninsula in 2014 and started supporting pro-Russian separatists in eastern Ukraine.

The federal government says that mission, known as Operation Unifier, helped train more than 30,000 Ukrainian soldiers before all Canadian troops were evacuated ahead of Russia’s invasion.

While the trainers eventually returned home, Canada has expanded the size of its military presence in Europe in response to the now war, which is in its sixth month.

That includes the 150 service members who recently returned from Poland, and reinforcing a Canadian-led NATO battle group in Latvia.

In April, Russia sanctioned all six former commanders of Operation Unifier, which some saw as proof of the mission’s success.

With files from The Canadian Press.