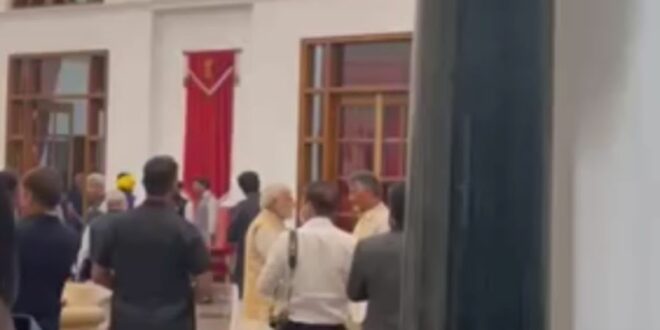 Chandrababu met Narendra Modi in Delhi and it triggered many questions in the state. Chandrababu had been to Delhi for Azadi Ka Amruth Mahotsav and he had a small meeting with Narendra Modi after that event. Modi and Chandrababu Naidu reportedly discussed many topics for about 5 minutes. The speculations started popping up that TDP is going to have the backing of the BJP for the next general elections and an alliance is likely possible.

Earlier, when the TDP office was attacked by YSRC party members, Chandrababu expressed his anguish through a protest for one day. Later he tried to meet Narendra Modi and Amit Shah but was declined by the latter. After waiting for two days in Delhi, Chandrababu returned to the state and never tried again to meet Modi.

It looks like the rift weakened between the two because of Chandrababu’s unexpected support in the Presidential elections. Central Minister Kishan Reddy also is heard to be sending positive vibes to the center about Chandrababu Naidu.