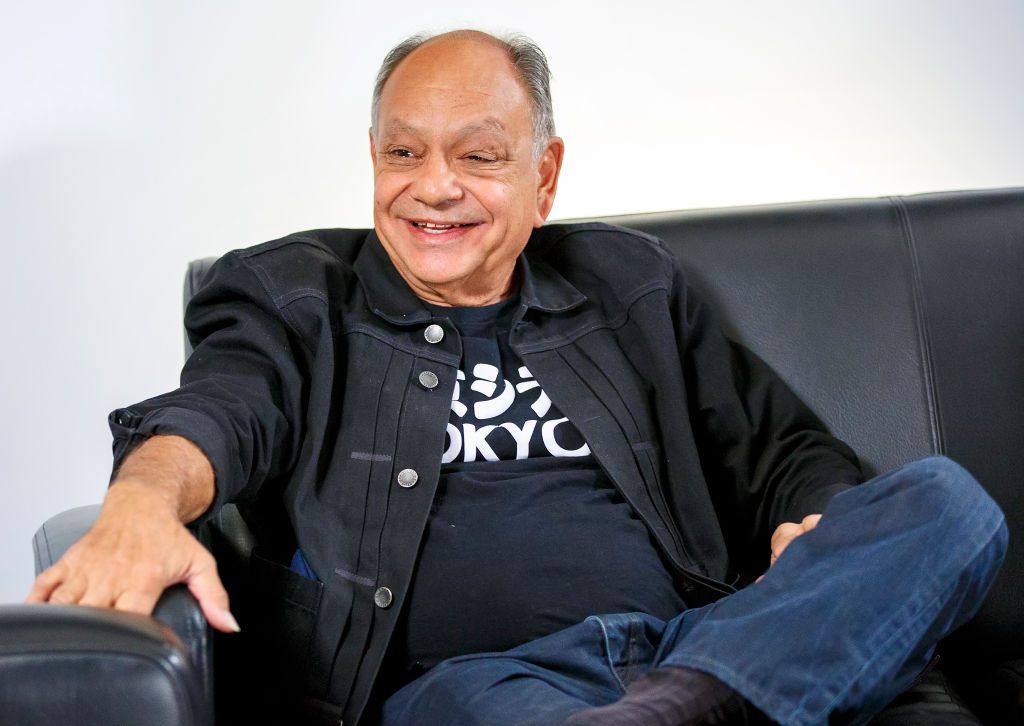 In The Green Scene, there’s no such thing as a silly question about cannabis. What’s the difference between THC and CBD? How the heck do I make edibles at home? What home design advice can dispensaries teach me? Kick back—we have the answers.

The good news is that Cheech Marin is awake. “Kind of. Sort of,” the comedy legend says, logging in over Zoom at his home on the west coast. The only bad news is—well actually, there’s no bad news to speak of for the next 40 minutes, because I’m talking with the Cheech Marin: the school bus driver, the guy who stands outside the club in Dusk Till Dawn and goes over the, um, entertainment inside; the Cheech in Cheech and Chong, the guys who mainstreamed good, fun stoner vibes into the bloodstream of America over 50 years ago.

There’s no bad news, but there is a request: “Pho and sesame noodles and ramen, and stuff like that,” that’s the closest to bad it gets. Marin would like to see some noodle dishes on the menu of his new food concept with weed smokers in mind, Muncheechos.

The idea is pretty simple: He’s selling the food you’d want to eat while stoned. One could say that’s really any food, but the items Marin and his partner, the chef-entrepreneur Zach Neil, came up with are particularly good: a “ranch-dusted” burger with crispy fried onions and jalapeño jam, a pulled BBQ chicken sub topped off with Flamin’ Hot Cheetos, and a vegan rice bowl loaded with veggies and a refreshing green sauce with just the right amount of kick, available by delivery in Los Angeles and New York City.They’re all things I’d think about making while high, but either I wouldn’t have the ingredients or the willpower to get off the couch to combine them.

It makes sense in a way a multi-course “pot-infused tasting menu” I once attended did not. The food was fine, but the small portions, slow delivery, and the overwhelming sense of getting high and not being able to just have something to stuff in my face were hellish. Marin feels similarly about dinners like that.

“Once, but not again. Because you walk out of there…” he starts and then pauses. “You don’t walk out of there—you kind of roll out of there. You know? So, no, I mean, it’s one thing if it’s like a dessert or something like that at the end of the meal, I could do that.”

But for Marin, all roads lead back to noodles. Back in the early 1970s, when Cheech and Chong, along with a few other comedy names we consider icons—Pryor, Carlin, Martin, and Rivers come to mind—were paving the way for the standup comedy boom that would go from small dingy clubs to massive stadiums by the end of the decade, there wasn’t Seamless or GrubHub and food options were mostly limited. But the duo didn’t mind. They didn’t even include much food on their rider, Marin says.

“After every show, we would go out and look for a Chinese restaurant because those were the ones that were open in any town at that time of night,” he explains. “And us coming out of a culture that we came out of—[living in] Chinatown in Vancouver, and Tommy’s half-Chinese—we knew a lot about Chinese food. And so, you could go into someplace in, I don’t know, Odessa, Texas at two in the morning, and you could go into the kitchen and you could say, ‘Blah, blah, do you have this? Can you make this?’ And they would, at any place. And so, that was our go-to place, was any Chinese restaurant.”

That was life on the road for arguably the two most famous stoners in the world during a time when weed becoming legalized wasn’t even a serious consideration. Marin says that the cops weren’t giving them a hard time. He thinks that’s because he had an understanding of the mind of the police back then, since his own father was an officer for the LAPD for 30 years. “I knew their sense of humor,” he says. “They loved us because they were dealing with the same things that we were dealing with, only they understood the humor in it.”

But there were plenty of people who didn’t. Today we live in a world of fancy ceramic bongs, edibles that are easily available in any state where recreational dispensaries can be found and people walking up and down the streets vaping or lighting up joints without worry.

Meanwhile, there are still a reported 40,000 people incarcerated for cannabis offenses, mostly people of color. But go back a decade or two, and hundreds of thousands of people a year were being arrested. From Nixon to Reagan, Cheech and Chong put a funny face on stoner culture, but they were also the faces of it.

All the while, Marin says he had a feeling things would shift to where they are going now. “We used to say when we were getting a lot of flak for promoting marijuana or having marijuana in our act or blah, blah, blah, ‘You know what, you’re giving us all this grief, but what if we’re right? What if marijuana is good for you?’”

But for Marin, seeing his intuition prove correct is nice. Working as an actor well into his 70s (he’s in two upcoming films this year, one with J. Lo and another with Woody Harrelson) is also great. But what he really wants, what the conversation keeps going back to, is one vital thing: “I like noodles. Whatever kind, whether Chinese, or pasta, or Vietnamese. I like Vietnamese. I had a Vietnamese restaurant that I was a part owner in in San Francisco for years. And so, I like Vietnamese, but I like all Asian food for the most part,” he says. “I like noodles.”

If you’re considering enjoying the products and/or recipes in this content, please consult and follow the legal restrictions for controlled substances in your state. Because there are so many variables with cannabis products, go slowly. You may want to start with half a serving and determine your tolerance and ideal dose from there. And always wait a couple hours to feel the effects.