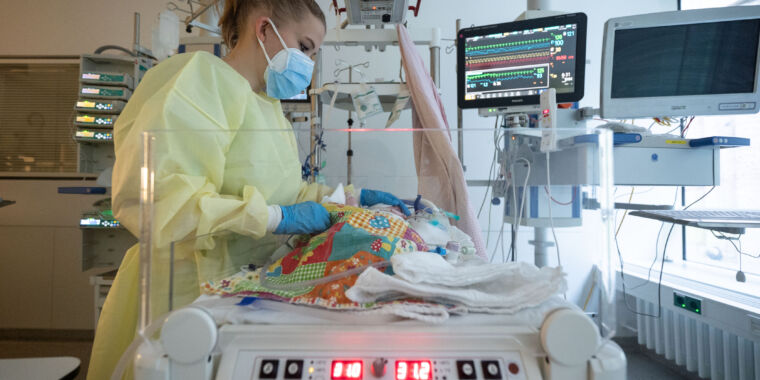 Doctors around the country are reporting early and dramatic surges in respiratory illnesses, with many children’s hospitals saying they’re running low on beds.

Nearly three-quarters of pediatric hospital beds are full, according to national data compiled by the Department of Health and Human Services. Some areas are seeing pediatric hospitals full, including the Washington, DC, and Boston areas.

Multiple viruses are behind the surge. As Ars reported earlier, health officials have warned about a surge in adenoviruses and enteroviruses, both common childhood respiratory viruses. One enterovirus, called EV-D68, is associated with a polio-like neurologic condition called acute flaccid myelitis (AFM) in young children, and health officials are bracing for a subsequent uptick in AFM cases. So far, the CDC has not seen such a rise this fall.

The latest data from the Centers for Disease Control and Prevention does, however, indicate a skyrocketing rate of cases of RSV—respiratory syncytial (sin-SISH-uhl) virus. RSV is a common respiratory infection that produces cold-like symptoms in most people but can turn life-threatening in a small percentage of cases, particularly those in infants and young children with specific underlying health conditions.

RSV typically rises later in the winter, with peaks in recent pre-pandemic years during late December. But, circulation of the virus began rising in late summer this year, and cases are now high, with the latest weekly case count from October 15 at over 7,000, according to CDC data. The peak of RSV cases in 2021 saw weekly counts mostly around 4,000.

And RSV isn’t the only virus getting an early start this fall. Flu circulation is also off to an unusually strong start, and officials worry that it could also be a particularly bad flu season.

The brisk rise of cold-weather viruses has experts doubling down on calls for flu shots and COVID-19 boosters. Although reported cases of COVID-19 are not showing signs of a dramatic upswing, the use of at-home testing makes official case counts difficult to interpret, and experts anticipate that a winter wave of COVID-19 is on the horizon, if not already starting.

“I think now’s a prudent time to not just get the COVID booster, the new bivalent vaccine, but also the flu vaccine,” former FDA Commissioner Scott Gottlieb said in a Sunday interview on CBS News’ Face the Nation. “Right now, we have flu cases picking up. It looks like this may be a more aggressive flu season. The predominant strain right now is H3N2, and the vaccine appears to be a good match for the strain.” As such, the vaccine looks like it will be “quite protective,” he said, and now is “a good time to get it.”

As for why this fall and winter are shaping up to be so rough, experts speculate it’s a combination of pandemic-related disruptions. The global explosion of SARS-CoV-2 transmission, subsequent lockdowns, and pandemic mitigation efforts wrecked normal transmission cycles of garden-variety respiratory viruses. Additionally, the reprieve from common viruses has created a larger-than-normal pool of susceptible young children as well as adults with waning immunity from past exposures.