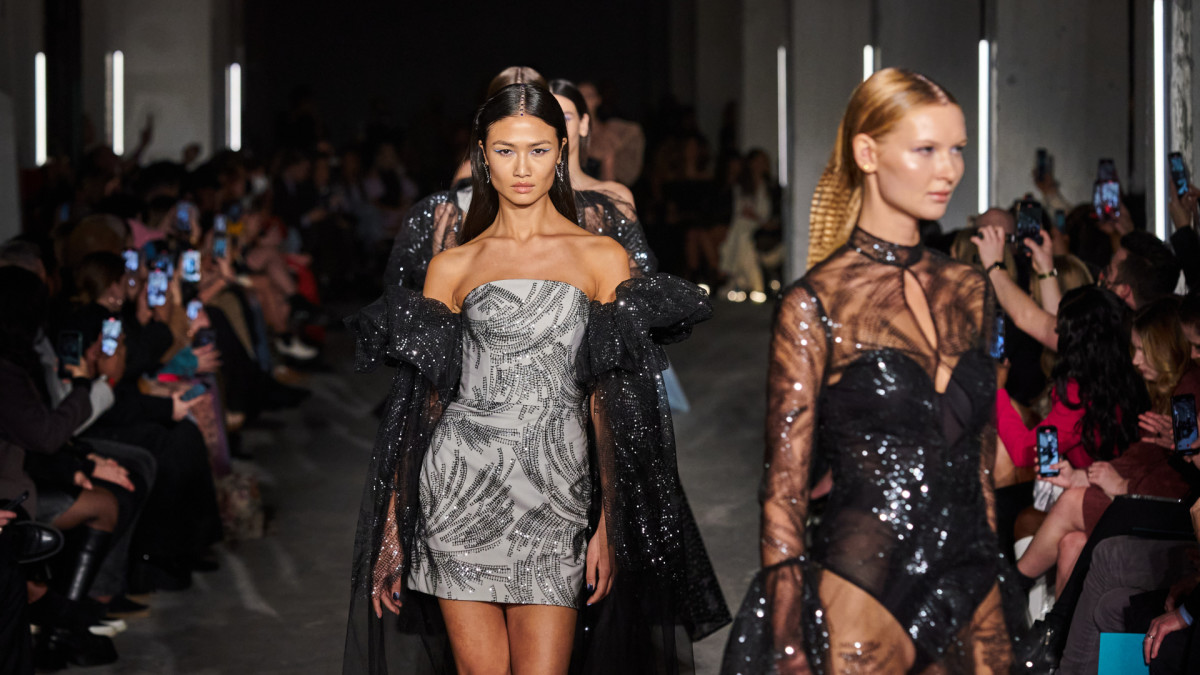 Christian Siriano is all about fantasy. His biannual fashion shows — filled with layers of tulle, gowns that fill up the runway and celebrities lining the front row — create a world of their own, where we all have a reason to dress up and vamp. For Fall 2022, though, the designer is letting you pick your own fantasy of sorts: He invites you to enter a Victorian Matrix, where you either layer your brocades or you pull up your latex gloves, depending on whatever your vibe is that day.

“We’re living in this other world — are we in Victorian times, or are we in this alternate world of tech and reality? What are we doing?,” he says. “That’s what I’m into. That’s what the fabrics are: a mix of tech and very feminine, beautiful Victorian silhouettes; plastics in the most romantic ways; lace that’s perforated and quilted.”

In Siriano’s Victorian Matrix, you have your pick of rich floral brocades or shiny latex leathers. You could wear them both at once, if you so choose. That’s kind of the point.

“I wanted fantasy. We need it. We have to have it,” Siriano argues. “Fashion is having such a hard time. We’re all getting beaten — magazines, customers… We’re all just having a rough go. Let’s just have some fun and bring some glamour.”

Siriano is a showman: He loves to put on the spectacle and invite everyone in. It’s what he’s become known for. There has been a new development in his preparation process, though — now, he says that he’s shortened the time between designing and debuting a collection, a response to the past two years, born out of a desire to be more in the moment. “That’s what’s inspiring me and keeps inspiring me,” he says. “I can’t go so far out anymore, because we never know what’s happening in our world tomorrow.”

And though Siriano has been consistent in his offering season after season (there’s a reason why Hollywood stylists have him on speed dial), the Fall 2022 manages to surprise in delight. Yes, there are beautiful gowns for the red carpet, but there are also very elegant daytime propositions, considered silhouettes and exciting materials, from quilted denim to gauzy lapis tulle. Still, evening is king for Siriano.

“Thank God, in the last four months, we’ve had so many evening requests — this is our moment, because people are desperate for it. They really want it,” he says. “So I think that’s what we’re trying to give.”

See the full Christian Siriano Fall 2022 collection in the gallery, below.