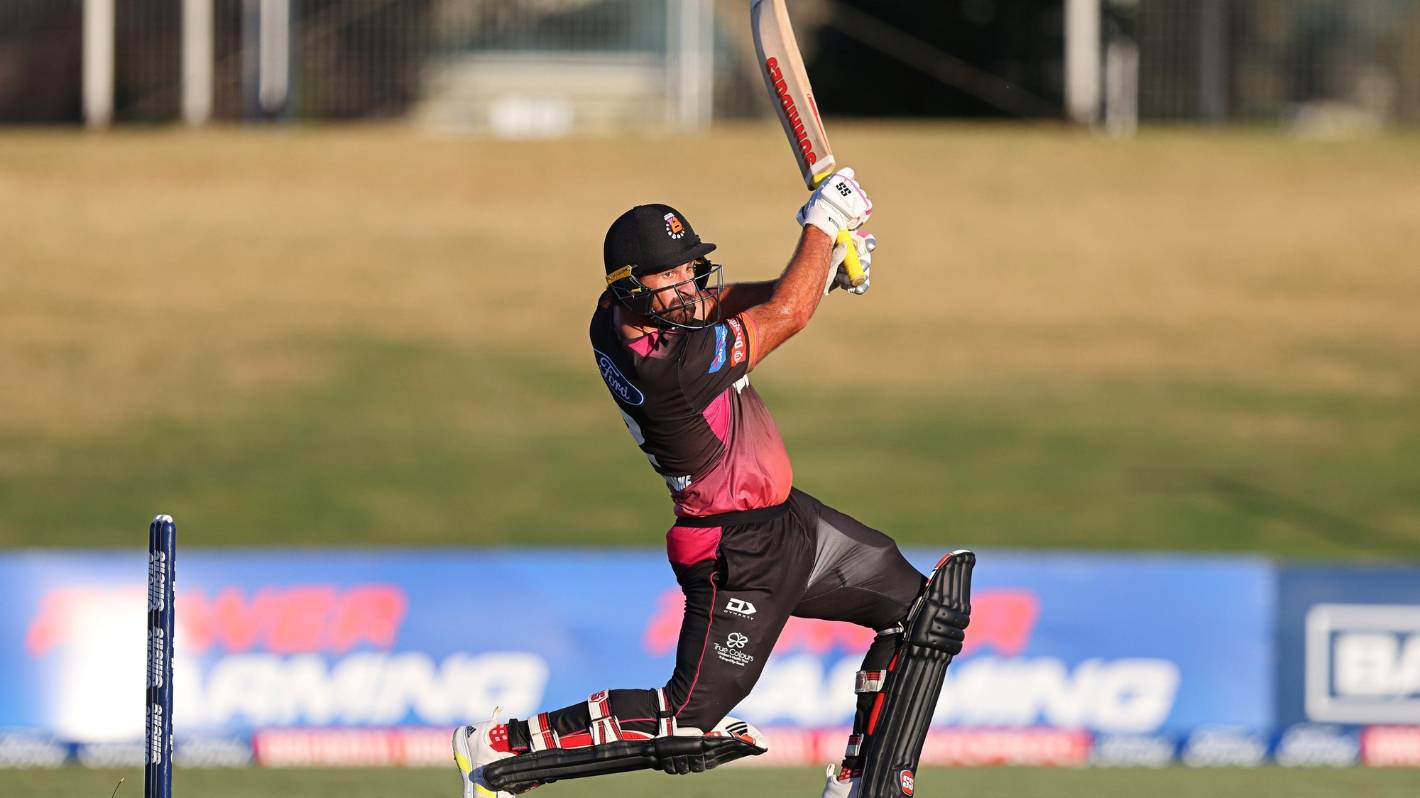 Colin de Grandhomme is sure seeing it big this week.

Fresh off his blistering 126 in Wednesday’s Ford Trophy defeat to Auckland, the Black Caps all-rounder gave a follow-up reminder that he’s by no means a faded force just yet, after smoking a career-best T20 score in the Northern Brave’s Super Smash win over the Central Stags in Mount Maunganui on Friday night.

While the rest of his side struggled for timing on a grassy Bay Oval surface they were sent in on, de Grandhomme put on a one-man show in the hosts’ 176-7, blasting 86 off 45 balls from No 4, in a typically-bruising knock featuring four fours and five sixes.

In was the 35-year-old’s 15th half century in his 227th match in the format, and it proved the clear difference between the sides, as the Brave, playing their first T20 in 15 days, surged back to the top of the table with their 19-run win, and all but ended any hope the Stags have of making the top three after they crashed to their fifth successive defeat.

After Blair Tickner (3-20 off 4) struck twice early, de Grandhomme then combined for a 112-run stand with Joe Carter, who merely had to play a rotation role with his 32 off 28, such was the destruction on offer at the other end.

With the hosts 40-2 after the powerplay, de Grandhomme went on the charge as soon as the fielders went out, hitting Ajaz Patel for back-to-back sixes – a beauty over cover followed by a slog sweep, before paddling the next ball for four and taking the seventh over for 19 to really swing the momentum.

Two overs later, Josh Clarkson’s sole set went for 15 thanks to a full toss going over cover then the next ball being slammed for six over point, and the hosts had themselves 84-2 at the halfway stage.

De Grandhomme brought up his 50 off just 28 balls, and it looked like the only thing that could stop him was a piece of friendly fire, as Carter smoked a Tom Bruce delivery flush into his mate’s arm.

Somehow showing no pain from the blow, de Grandhomme went downtown next ball, and should have perished, only for Doug Bracewell to drop the chance at long-on.

Salt was quick to be rubbed in, as the 100-run partnership came up in the next over, from just 59 deliveries, and the ball after, de Grandhomme launched Seth Rance onto the roof.

But the Brave then just couldn’t ice the cake from their great platform. At 143-2 going into the last five overs, they lost five wickets in 18 balls and could only find 19 off the next four overs.

The big stand – a third-wicket record for the Brave – was ended in the 16th by Jayden Lennox – impressive with 2-23 off his four – as Bracewell redeemed himself with a good take to dismiss Carter, before the left-arm spinner then had Mitchell Santner caught behind first ball.

And, with a maiden century in sight, de Grandhomme fell in the 17th, skying a hook off Tickner for Bracewell to swallow on the square leg boundary.

In reply, Ben Smith kept the Stags in with a shot, with the opener making a valiant 68 off 53 (five fours, two sixes), but the experienced Brave bowling attack – which didn’t even feature de Grandhomme – proved too slick.

The visitors were in early trouble at 16-2 when Dane Cleaver, the competition’s top runscorer, returning to the side following the birth of his first child, was runout in a bad mix-up.

The Stags recovered well to be ahead at the powerplay comparison (53-2), but then came the big examination, as Black Caps spinners Santner (2-25 off 4) and Ish Sodhi (1-29 off 4) entered the fray, and indeed came up trumps, proving typically economical.

Santner profited in his first over by having Ma’ara Ave caught at deep square, then Sodhi struck in his second, trapping Stags captain Bruce in front, and the visitors were 72-4 at halfway.

Smith found a dangerous ally in Clarkson (20 off 12), who hit Sodhi for successive sixes but perished next over when slicing Matt Fisher to deep point. Though with the promising young speedster then coughing up extras, the Stags were still a shot, and needed 45 off the last four.

However, Santner completed his spell diligently, then with off-spinner Joe Walker introduced late, he had the huge wicket of Smith first ball, well taken by Scott Kuggeleijn tracking back on the boundary, and in conceding just two off his over, the game was essentially done.