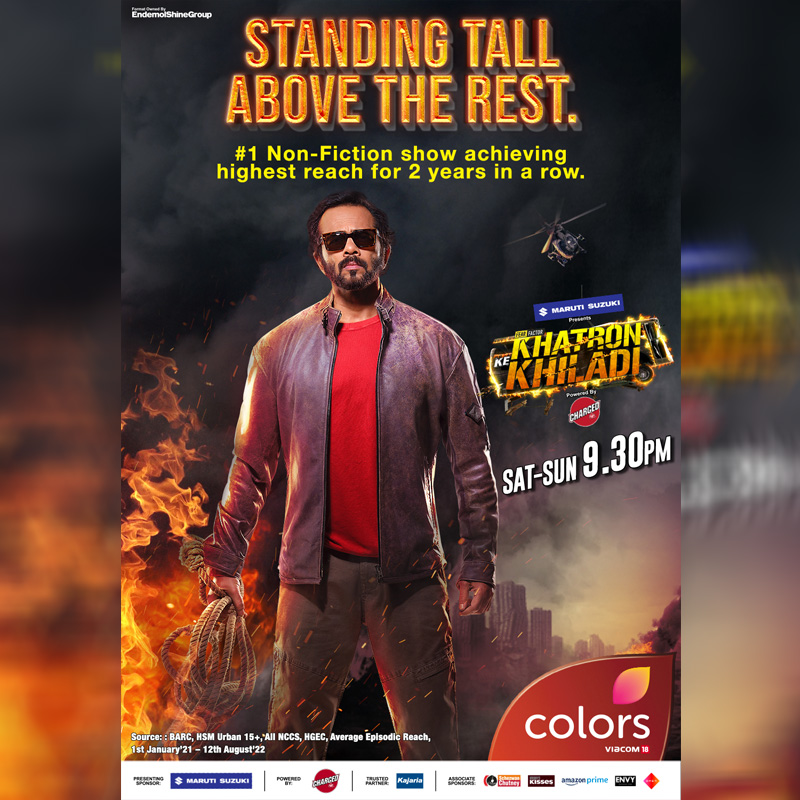 Mumbai: Stunt-based reality show, Khatron Ke Khiladi, has delivered yet another successful season with its action-packed content, breaking records across various mediums. The show was featured as the #1 non-fiction show in the category, receiving rave reviews across the globe and making Colors the #1 weekend destination with a 24 per cent market share, generating over five million conversations, including multiple organic trends on a weekly basis. The Rohit Shetty action extravaganza, which has had the highest reach for two years running, also has the highest average episodic reach on weekends.

Colors launched a 360-degree high-impact campaign across platforms, with the aim of connecting with fans and giving them a first-hand experience of Khatron Ke Khiladi. An interactive Instagram filter was introduced, with a fun task to match expressions with their favourite contestants. The super cool filter clocked a whopping six million impressions. To bring the element of fear to life, Colors created harmless prank videos by tricking people in elevators through fake scenarios such as collapsing floors and silicon snakes.

This was a major hit across social media where it garnered one million views due to the high shareability of the videos, which were an instant hit amongst the masses. Taking it up a notch, each contestant was innovatively introduced in stylized videos, which cumulatively garnered over 30 million views. There is much more to Khatron Ke Khiladi than meets the eye, and that goes behind the scenes in the making of the show.

Taking viewers up close and personal, a larger-than-life BTS video of action master and host Rohit Shetty was posted, fetching more than six million views across platforms. Keeping the viewers hooked with engaging content and fun videos, including the contestants’ prepping and testing their reflexes with ‘Try not to flinch’, garnered more than 10 million views. The show had a consistent 80 per cent share of voice across the GEC sector and the highest among the shows in the GEC space on social media, with an overall one billion views and a 1.5 billion reach across social media platforms.

Speaking on the success of Khatron Ke Khiladi 12, Viacom18 head – Hindi mass entertainment and kids TV network Nina Elavia Jaipuria said, “The grand success of Khatron Ke Khiladi is a testament to our commitment to provide wholesome entertainment to our viewers. Over the years, the show has set new benchmarks, broken records across platforms and is once again the number one non-fiction show in the category. It continues to be an exceptional showcase of unparalleled entertainment and a great platform for advertisers. As we continuously strive to entertain and innovate, we look forward to unwavering support from our viewers and advertisers.”

The property has been a resounding success with advertisers as well, wherein the title sponsor Maruti Suzuki remains this season along with Amazon Prime, Spotify India, Hershey’s India, Oppo Mobiles India and more, who continued their partnership with the country’s highest rated reality show, and the powered by-charged by Thumps up, along with special status Kajaria Ceramics, Ching’s, among others, are some of the newer brands who have partnered this season.

Khatron Ke Khiladi, airs every Saturday and Sunday at 9.30 p.m. on Colors.