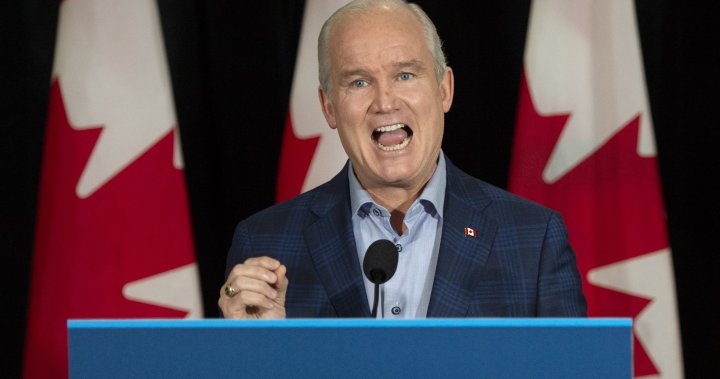 The Conservative leader has been doing everything he can on the campaign trail to sound moderate, affable and prime ministerial — a uniter rather than a polarizer.

And that strategy to project the image of a nice guy — a softer kind of Conservative than Stephen Harper could ever have been — seems to be working.

Unfortunately for O’Toole, Ryerson’s plan to ditch its 73-year-old handle — inevitable, really, since the university’s namesake has become best known today as a chief architect of Canada’s residential schools system — may jog voters’ memories about one of the Tory leader’s greatest embarrassments of the past year.

For those who’ve forgotten, O’Toole was caught on video last fall mocking the “woke crowd” pressing the university to rename Ryerson and finally remove an oft-vandalized statue of 19th-century educator Egerton Ryerson from the downtown Toronto campus.

Worse, O’Toole stated that residential schools were “meant to try and provide education” before the system turned “horrible,” insisting that it’s a mistake “misrepresenting the past” to vilify historical figures like Ryerson and Hector-Louis Langevin, a powerful Conservative cabinet minister in the post-Confederation governments of John A. Macdonald.

Those three historical figures, who have taken most of the blame for creating the residential schools system, have been the main targets of a powerful push over the past few years — a push repeatedly condemned by O’Toole — to have their names and statues removed from many places across Canada’s commemorative landscape.

Remember that other embarrassing video of O’Toole standing outside the Prime Minister’s Office in Ottawa and pointing to a nearby work site with a porta-potty? O’Toole’s widely- ridiculed, juvenile joke about the go-hut that he said should be Justin Trudeau’s office was part of an diatribe about Trudeau’s 2017 renaming of Langevin Block, home of the PMO, as a reconciliation gesture.

“I was the only one who publicly took a stand against him, because I said if we start this trend of eliminating the history to meet his political narrative, where is it going to end?” O’Toole stated in that June 2020 Facebook Live video message, slamming commemoration reformers who demand renamings and the removal of certain statues.

“Where do they take their attack? To Conservative icons like Langevin, like Sir John A. Macdonald statues,” O’Toole seethed, making clear this is a partisan issue for him.

But the Conservative leader’s vocal position on these matters has become especially difficult to defend in the wake of this year’s revelations about hundreds upon hundreds of unmarked children’s graves at Canada’s former residential schools.

Meanwhile, more and more municipal governments, universities and other institutions across Canada have initiated reviews, conducted consultations and implemented sensible changes to commemorative tributes — in part to acknowledge the horrors of the residential school system, but also in response to the anti-racism movement, which began in 2020, that highlighted the many ways Canada has honoured 19th-century slave owners and tolerated other racist geographical names.

But there’s no easy pivot for O’Toole on this issue. His bid for the Conservative leadership was launched in January 2020 with a video showing the removal of a Macdonald statue in B.C. and his pledge to fight such attacks on the icons of Canada’s past: “Who’s going to defend our history, our institutions,” candidate O’Toole asked at the time, “against attacks from cancel culture and the radical left?”

OK, this might be getting confusing — that’s three embarrassing O’Toole videos now. So let’s get back to the one from Ryerson.

“Most of the lefty radicals are also the dumbest people at your university,” O’Toole said in the October 2020 video message to a group of Ryerson Young Conservatives eager to hear such things from their party’s newly-crowned national leader.

O’Toole went on to brag about the way he silences Liberals in the House of Commons by pointing out that several residential schools were opened when Justin Trudeau’s father was Canada’s Liberal prime minister, and that it was modern Conservatives who have done most for Indigenous reconciliation, highlighted by Harper’s formal apology over the residential schools tragedy.

“You know who opened more residential schools than Egerton Ryerson?” a gleeful O’Toole asked the students via the Oct. 30 video link. “Pierre Elliott Trudeau. He opened four of them. Maybe five … Where is the woke left calling for the renaming of the Trudeau airport?”
O’Toole also suggested the Tories’ “better record” on residential schools “shocks the hell out of the woke crowd, I’ll tell you.”

The history lessons from Professor O’Toole continued: “When Egerton Ryerson was called in by Hector Langevin and people, it was meant to try and provide education. It became a horrible program that really harmed people, and we have to learn from that.”

Those words created a momentary crisis for O’Toole, whose comments were condemned as “reprehensible” by then-Assembly of First Nations National Chief Perry Bellegarde.

O’Toole quickly backtracked on what sounded a lot like the “good intentions” argument about residential schools favoured by former Conservative senator Lynn Beyak, now retired, who was eventually booted from the party by former leader Andrew Scheer because of her views.

In a December 2020 statement aimed at defusing the controversy over the Ryerson video, O’Toole admitted the residential school system was “intended to remove children from the influence of their homes, families, traditions, and cultures.”

He further acknowledged that the “very existence” of the schools is “a terrible stain on Canada’s history that has had sweeping impacts on generations of Indigenous Canadians.”

Perhaps O’Toole imagined he could put the issue behind him with that. The Conservative election platform includes measures to advance Indigenous reconciliation. And the leader even announced measures this week to fund Indigenous mental health services, presumably including support for those suffering inter-generational trauma that is part of the grim legacy of residential schools.

On the day Ryerson announced its planned name change, O’Toole happened to call for an end to months of flying the Canadian flag at half-mast at public buildings. The extended gesture of mourning is being made in response to the discovery of so many Indigenous children’s unmarked burials at former residential schools.

O’Toole said it’s time to get back to being proud of Canada. But it’s fair to wonder if O’Toole will be forced in this campaign to better account for some of his past statements, and whether he may yet find himself on the wrong side of history.