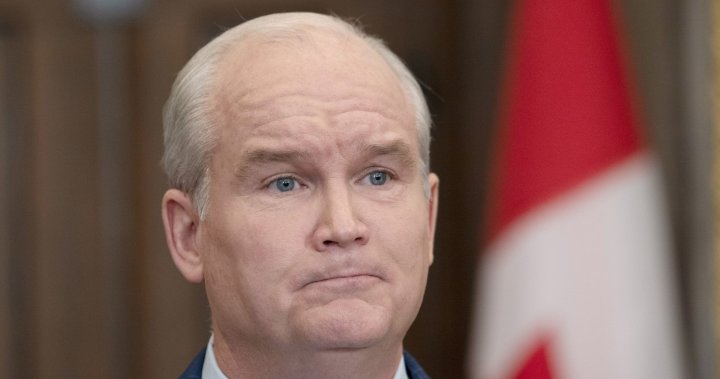 Conservatives say all 338 members of Parliament should be able to vote on whether they must be fully vaccinated against COVID-19 to enter the House of Commons.

Tory whip Blake Richards asked Commons Speaker Anthony Rota on Tuesday to rule that the nine-member, multi-party body that governs the House does not have the authority to impose a vaccine mandate on all MPs.

The complaint from the Conservatives represents the latest chapter in their three-month struggle with mandatory vaccinations in general, which first emerged as an issue during the September election campaign. It has since morphed into a leadership challenge for Erin O’Toole, who has faced calls for his tenure to be reviewed following the party’s election loss.

He refuses to say how many of his 118-MPs are double vaccinated against COVID-19 or how many have claimed medical exemptions, saying he respects their right to privacy.

O’Toole is the only federal leader to take that position, which has exposed him to attacks from the Liberals, as well as New Democrats, who accuse the Conservatives of wanting special treatment.

The other parties say all their MPs are fully vaccinated and support mandatory vaccination for admission to the Commons precinct.

Since the mandatory vaccination policy was announced last month, some Conservatives have strongly opposed proof-of-vaccination policies for entering businesses and workplaces. while others have expressed concern that internal strife over the matter has become a distraction.

O’Toole tried to find a middle ground by agreeing to formally challenge the vaccine mandate for MPs while promising that all Conservatives would follow the rules in the meantime.

11:51
All Conservative MPs must be vaccinated or have medical exemptions: O’Toole

All Conservative MPs must be vaccinated or have medical exemptions: O’Toole

On Tuesday, Richards emphasized that Conservatives believe in getting vaccinated against COVID-19 and that the shots are the best way to end the pandemic.

What he questioned, however, is the way in which the decision to impose a vaccine mandate was made.

Last month, the board of internal economy voted in a policy requiring those entering all buildings in the House of Commons precinct to provide proof of vaccination or have a medical exemption.

Richards said he and the other Conservative MP who took part in that meeting abstained from the vote.

He argued that the board lacked the jurisdiction to make such a decision that carries “sweeping constitutional implications” because it affects MPs’ access to Parliament.

He raised the issue as a point of privilege Tuesday, saying he wants to see all MPs decide on a “vaccination or test mandate” to enter the chamber and other parliamentary buildings.

Rota took Richards’ arguments under advisement and will rule on the matter at a later date.

While for weeks O’Toole faced questions about how many of his MPs were fully vaccinated, he’s now under pressure from the Liberals to say how many have claimed medical exemptions.

Government House leader Mark Holland kicked-off the new Parliament on Monday by suggesting it’s statistically unlikely for the Conservative caucus to have multiple members with legitimate medical reasons for not getting vaccinated.

An analysis by The Canadian Press found at least two of the 119 Conservative MPs have said they can’t get vaccinated for medical reasons, while 83 others said they’ve had both of their shots. The others haven’t publicly disclosed their status, with some like Ontario MP Leslyn Lewis saying they believe that information is private.

O’Toole didn’t answer Tuesday when asked again how many of his members have medical exemptions, but said Conservatives worked with officials on Parliament Hill to ensure they met public health requirements, and expressed disappointment at the Liberals’ suggestion those officials didn’t do their jobs properly.