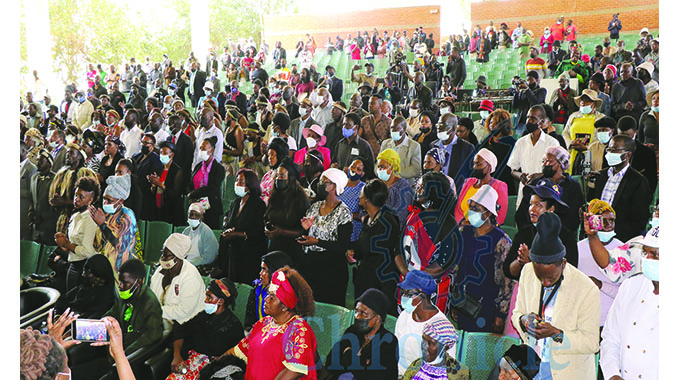 Yvonne Ncube, Showbiz Correspondent
THE family of the late arts guru Cont Mhlanga is establishing a Cont Mhlanga foundation which seeks to preserve his legacy.

This was revealed by his daughter, Gcina Mhlanga at his funeral service at Amphitheatre in Bulawayo yesterday.

Mhlanga (64) died on Monday morning at the United Bulawayo Hospitals (UBH) after being admitted for 10 days.

He succumbed to pneumonia.

He will be buried today at his rural home in Lupane.

Hundreds of people countrywide and some from outside stood up from their seats to bid farewell to the legend whom they referred to as “umalume” and to some “uKhulu.”

The service was graced by several poets who recited poems praising the arts guru.

The likes of Moyoxide blew out the crowds with lyrical lines describing Mhlanga as an “cash talk warrior.”

Making the announcement Ms Mhlanga said her late father’s work will be protected by the foundation.

“As the children of Cont Mhlanga we celebrate the life of our father and we are deeply humbled to have shared a part of our life time with him.

Up until his death we never truly realised how much of an influence our father has been to Bulawayo and the country at large.

We never truly understood the impact of his work on the arts fraternity.

To us he was just an ordinary man with the wildest dreams.

“We have started to understand why he raised us the way he did.

He was preparing us to fill in his shoes, it never really clicked to us that we were standing on the shoulders of a giant.

We know we will not live up to his reputation for it is too big, all we can do is create an atmosphere that best preserves his legacy.

“That is why as his children we have plans to open a Cont Mhlanga Foundation which will be a custodian and have all the rights to Cont Mhlanga’s works.

All his plays, poems, books and all the kinds of literature that are in his name. All these will be managed by his foundation.

It is our hope that this foundation will keep his legacy forever and continue to transform lives,” Ms Mhlanga said.

Some artistes took the stage to share how Mhlanga impacted their lives.

Nomathamsanqa Mkhwananzi aka Nkwali shared how Mhlanga gave her the opportunity to take acting as a career by giving her a role in one of his stage plays, Stitsha.

South Africa based Rasta the Artiste handed over a portrait of the arts legend to the Mhlanga family.

Rasta who is known for what is perceived as a bad drawing, shocked the public this time around as many said that he nailed it.

Representing the artistes Sotsha Moyo of Black Umfolosi said Mhlanga was a man of unity who wanted all members of society to unite so that peace can prevail.

At the end of his speech, he took the crowd back to the 1990s through their song titled Unity.

Umkhathi Theatre Works delivered an incredible performance of Isitshikitsha dance that lifted people out of their gloomy mood and made them cheer up a little.

Even the director of ceremony, Sihlangu Dlodlo, a close friend to Mhlanga demonstrated that he is nimble footed.

An obituary of Mhlanga was given by his brother Styx.

He said Mhlanga was named Mdladlakagoqweni by their great grandparents.

“Cont was the first born in our family. He was named Mdladlakagoqweni by our great grandparents.

He was mentored by my parents and the whole Mhlanga clan. Cont had a creative mind ever since childhood.

When we were playing, he would change our games and present new techniques to play them and come up with rules that made the games even more fun.

“We come from a predominantly male family. Cont was very tiny when we were
growing up.

Cont used to learn at a boarding school so when he was around, we would gather around the fire and he would tell us interesting stories about what happens at their school.

That’s when he started showing his gift of storytelling because he would describe occurrences and we would picture them as if we were there,” Styx said.

He said amongst the many stories that Mhlanga told, only one has remained in his memory.

“He told us many stories but only one remains in my mind.

He said that at their school near the church there was an orchard and the orchard had different kinds of citrus fruits which were very tempting.

So, he and his friend Mike went in to steal peaches making sure that no one saw them. Little did they know that the pastor had seen them.

So, the next day at church the pastor scolded him specifically and said to him, God doesn’t like children who steal.

From that day he believed that God communicated through the pastor and behaved for the longest time. That’s the most amusing story for me,” Styx said.

At the end of the service everyone agreed that “Umkhulu loMsebenzi.”