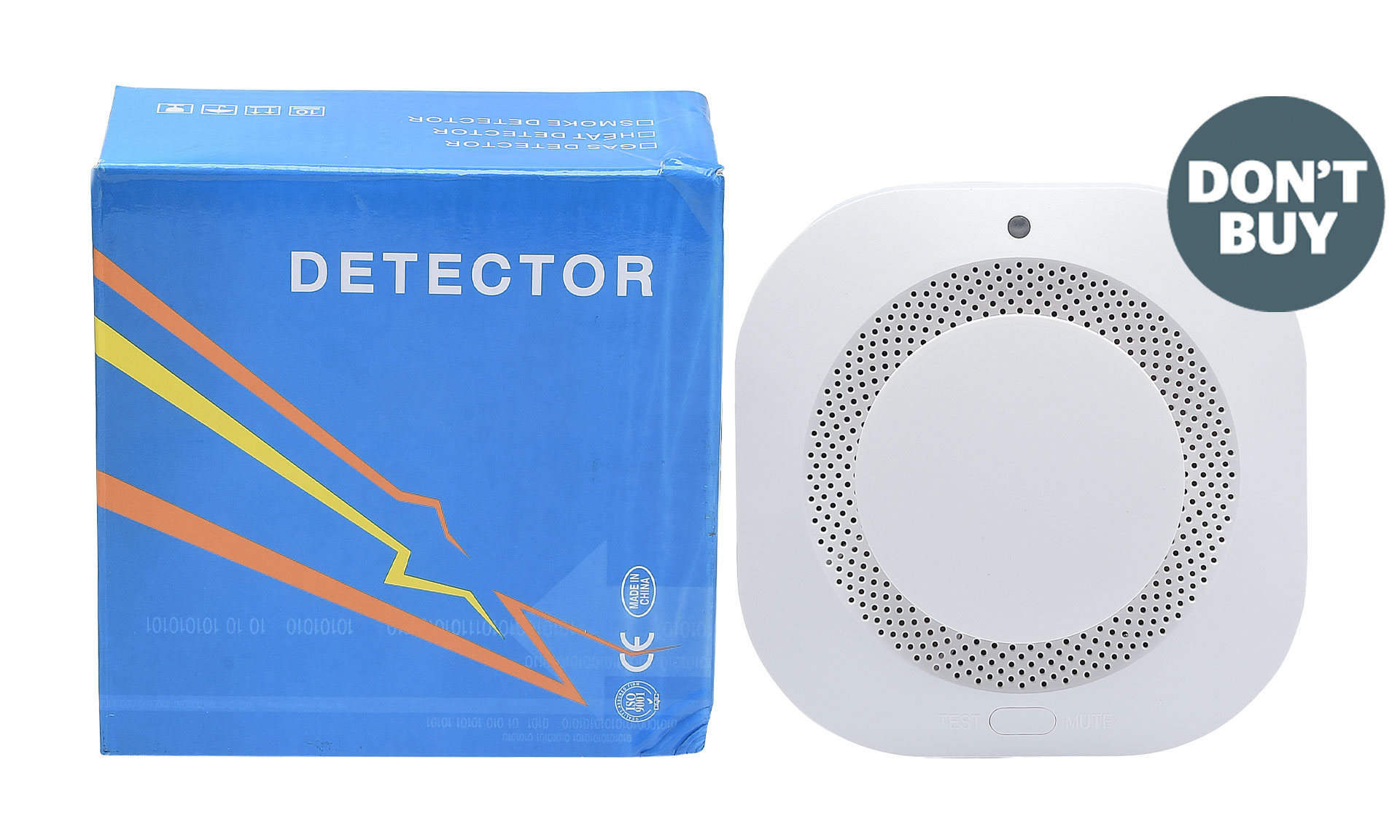 The Digoo DG-SA01 won’t protect you or your family in the event of a fire. Don’t buy it.

We test whether smoke alarms can detect fire in a range of scenarios, replicating house fire conditions. If a smoke alarm failed to detect a fire even once, it would be extremely concerning. This one failed to sound the alarm in most of our tests. Of course, we’ve made it a Don’t Buy.

The Digoo DG-SA01 was bought from online marketplace Wish for £8. We’ve also seen it for sale through AliExpress.

Use our Best Buy smoke alarm reviews to find a reliable smoke alarm that will sound every time.

Smoke alarms have one job to do – and the Digoo DG-SA01 can’t manage it.

This suggests that the CE mark, as shown on the box, below, isn’t genuine.

Sue Davies, head of consumer protection policy at Which?, said: ‘Consumers should be able to trust that products sold in the UK are safe and meet the standards required, but a lack of checks and monitoring by some online marketplaces means dangerous smoke alarms are still entering people’s homes.

‘It is absolutely crucial that online marketplaces are urgently given greater legal responsibility for the safety of products sold on their sites so that consumers are far better protected from dangerous and illegal items.’

This isn’t the first time that a Digoo alarm has failed our smoke alarm tests either.

In 2020, we tested the even more dangerously unresponsive Digoo DG-SA10 smoke alarm. This one failed to sound in all of our smoke detection tests.

If you’re not sure what brand of smoke alarm you have in your home, check it now. If it looks like the one above, replace it.

Other dangerous smoke alarms sold though online marketplaces and tested by Which?

And Digoo isn’t the only provider of dangerous smoke alarms that our testing has exposed.

Unbranded smoke alarms are almost always temptingly cheap, selling for less than £10 in most cases. But every single unbranded smoke alarm that we’ve tested since 2018 has failed in our smoke detection tests. All came from China and were sold through online marketplaces.

Following action from Which?, many listings for these alarms have been removed by online marketplaces.

But, if the alarm in your home looks like any of those pictured above, it will be useless in a fire.

Find out how to buy the best smoke alarm, including how much you should expect to pay, what kind of battery you’ll need and whether you should consider a smart smoke alarm.

We test smoke alarms in a fire chamber with four different types of test fire. All of our tests are taken from the BS EN 14604:2005 smoke alarms standard.

The fires are fuelled by cotton, plastics, solvents and wood, as these materials could all catch fire in your home. We record how dense the smoke is at the point each smoke alarm sounds, so that we can tell you how quickly it raises an alarm. We test two samples of each smoke alarm so that every brand is given eight chances to detect smoke.

If an alarm fails to detect smoke in any one of the eight test fires, that product will become a Don’t Buy.

Some alarms will detect smoke and sound the alarm – and, in doing so, meet the requirements of the standard test – but the smoke will be more dense than we consider safe at the point they sounded.

What the online marketplaces told us

We presented our findings to

Wish told us: ‘We can confirm that the listing flagged by Which? was removed from the platform in August. We remain committed to creating a safe and fun environment for users to shop online, and continue to deploy further measures to help prevent, detect, and remove unsafe items from appearing on the platform.’

AliExpress told us: ‘After being contacted by Which?, we have removed the third-party product listings identified in their investigation as unsafe. AliExpress takes product safety very seriously and works relentlessly to ensure that consumers are protected on our platform. We have strict platform rules that require all third-party sellers to comply with all applicable local laws and regulations.’

In February 2022, the fire and smoke alarm regulations in Scotland are due to change.

If you live in Scotland, you will need:

All alarms must be ceiling-mounted and interlinked.

Other than the Digoo alarm, all of the other new smoke alarms tested by Which? comply with the change to the law in Scotland and will be suitable for Scottish homes.

We’ve also tested heat alarms in conjunction with the smoke alarms from the same brand to make sure that, when one alarm sounds, they both sound.

If you have an old, unlinked smoke alarm in your home, you can still use it. But you should also get an interlinked smoke and heat alarm system installed in your property, too.

New smoke and heat alarms suitable for homes in Scotland

We’ve also recently tested smoke and heat alarms from Aico, Kidde and FireAngel. You can follow the links below to find out which ones are Best Buys.  All will be suitable for Scottish homes when the law changes in February 2022.

Read more about how to set up your smoke alarm and check it’s working properly.

Got some big purchases to make and wondering if it’s worth braving the Black Friday sales? We’ve been trawling through online deals ahead of Black Friday to find the deals that represent genuine savings – and to make sure you don’t get caught out by deals that aren’t all they seem.