Date locked for the release of Vikram Vedha’s trailer 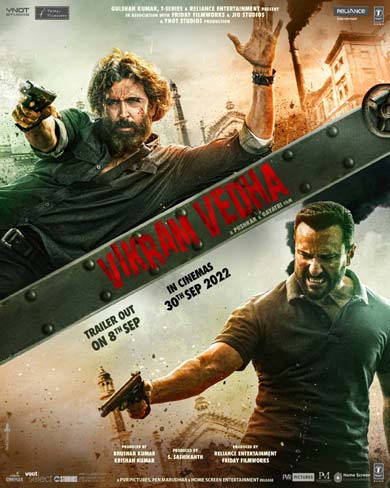 Vikram Vedha is one of the most anticipated Bollywood movies in recent times. Starring Hrithik Roshan and Saif Ali Khan in lead roles, the movie is directed by the director duo, Pushkar-Gayathri, who helmed the original in Tamil.

The recently released teaser created a sensation and upped hype on the biggie. To continue it, the makers have decided to release the theatrical trailer on September 8, 2022. A brand new poster has also been released to announce the same.

Radhika Apte will appear in a pivotal role. Produced by Reliance Entertainment, T-Series Films, YNOT Studios and Friday Filmworks, the movie is confirmed to hit screens on September 30, 2022, worldwide.