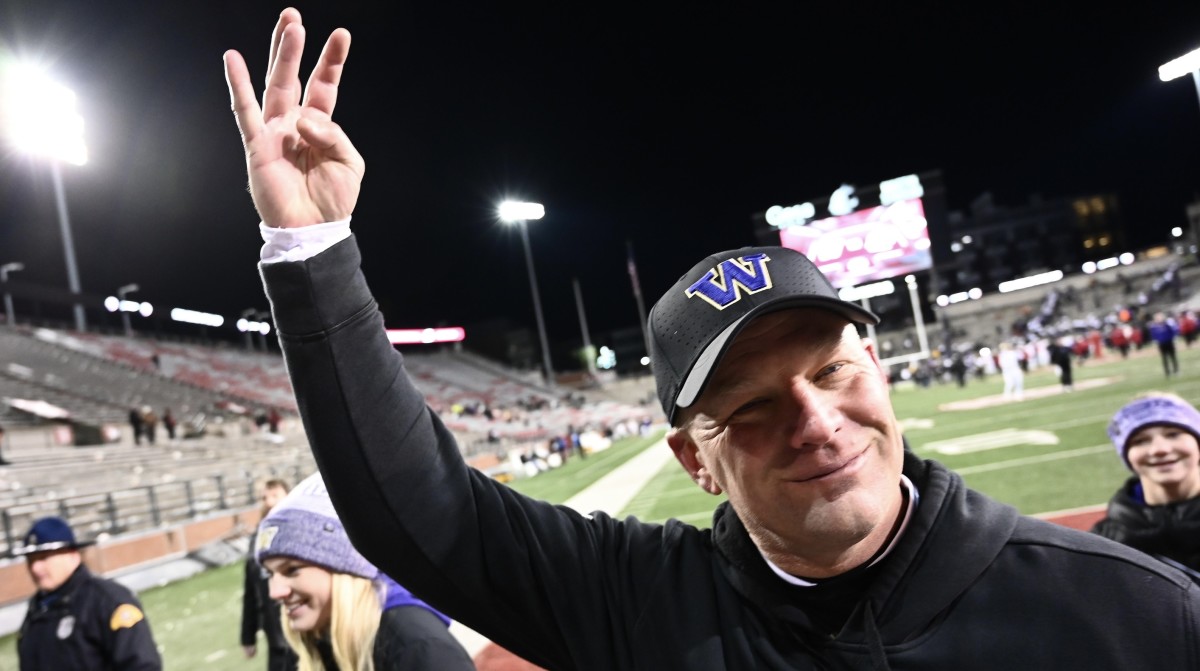 In one of the most remarkable seasons in University of Washington football history, Kalen DeBoer needed just 12 games to make himself an unforgettable figure around Montlake.

On Saturday night at the Apple Cup, he directed the Huskies to a 51-33 victory over Washington State in Pullman and a 10th win — success that no other UW football coach has enjoyed in his first season and very few have accomplished at any time in their Husky careers.

“It means a lot,” DeBoer said in a cramped interview room at WSU. “At some point, you sit back and realize what’s happened. But I pointed out to the players, from the beginning of the week and even touched on it a little last week: winning 10 games is not easy. Even in our great program and history, there’s only been a few select teams over 100-plus years — and we’ve done that.”

Ten wins in a regular season puts you into such an elite group, the Huskies are just one of nine teams this season who have reached that level, joining Alabama, Clemson, Penn State, South Alabama, Tennessee, Troy, Tulane and UTSA, all 10-2.

With a Cougar victory, he beat all three Northwest teams this season, which hadn’t happened since Chris Petersen’s Huskies pulled that coaching feat in 2017. Yes, he beat Oregon, at Oregon, which is such a breakthrough it will be hard to top by whatever bowl game the UW lands.

In just three months of games, DeBoer has the Huskies poised for a New Year’s Day bowl game, possibly the Cotton Bowl or even the Rose Bowl if USC advances to the CFP.

“That’s obviously stuff I can’t control, [but] we put ourselves in a position to be excited about probably a great opportunity,” he said. [We] just need a few things to hopefully fall our way here in the next week.”

He also did something else that no other first-year UW football coach has managed, landing a big contract extension through 2028 even before his debut season was complete, meaning he won’t be going anywhere for quite awhile.

DeBoer, still getting acclimated to this new job of his, brought his wife and two daughters on a road trip for the first time at the UW, further settling in.

This coach has been so steadfast in what he’s been doing, DeBoer even survived an overly painful kidney stone that occurred at midseason, while he was doing his regular Monday briefing for Oregon State.

Rather than get up and leave the media session, DeBoer simply paused twice with a grimace, gutted it out and kept answering questions. The day after the ensuing 24-21 Friday night win over the Beavers, he even ended up in the emergency room for treatment at UW Medical Center, not missing anything along the way.

All along, he’s kept coaching to a high level of success, bringing the best out of a team that previously was mismanaged to disheartening 4-8 record last season, which led to the coaching change and him coming to Seattle.

Even while counting up all of those first-season wins, DeBoer has made sure his players do it the right way, without rancor or silly actions that would be considered revenge, such as planting a flag at the middle of Martin Stadium to respond to what WSU did last year.

DeBoer and his coaches cautioned his guys from doing anything like that and went out on to the field afterward to make double sure that nothing happened.

“We needed to act like that this is just part of what we do,” the plain-spoken coach said. “We have respect. Respect all, fear none. That’a a piece of it. It’s important to our team. We’ve done it all season long. We knew we had to do that in tonight’s game. … When you win, I still wanted to make sure we handled it in a first-class way.”

Go to si.com/college/washington to read the latest Inside the Huskies stories — as soon as they’re published.

Not all stories are posted on the fan sites.

Find Inside the Huskies on Facebook by searching: Inside Huskies/FanNation at SI.com or https://www.facebook.com/dan.raley.12