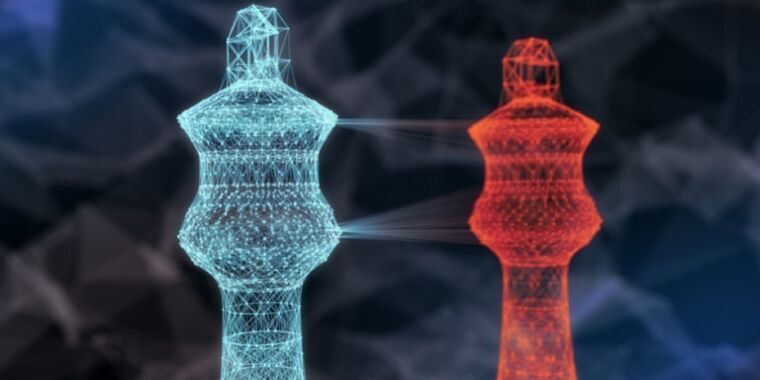 As we’ve reported previously, quantum chess (as played in the tournament) is the brainchild of Chris Cantwell of Quantum Realm Games. When he was a graduate student in quantum computing at the University of Southern California, he got the idea while working on a project for a class on creativity and invention.

“My initial goal was to create a version of quantum chess that was truly quantum in nature, so you get to play with the phenomenon,” Cantwell told Gizmodo back in 2016. “I didn’t want it to just be a game that taught people quantum mechanics.” By playing the game, the player slowly develops an intuitive sense of the rules governing the quantum realm. In fact, “I feel like I’ve come to more intuitively understand quantum phenomena myself, just by making the game,” he said.

In quantum chess, there are multiple boards on which the pieces exist, and their number is not fixed. Players can perform “quantum moves” as well as regular chess moves; players just need to indicate which type of move they’re performing. Any quantum move will create a superposition of boards (doubling the number of possible boards in the superposition with each quantum move), although the player will see a single board representing all boards at the same time. And any individual move acts on all boards at the same time.

Pieces can also be entangled with each other. In order to determine where the entangled piece is actually located, a player must make a measurement. In fact, that’s the only way to win a game of quantum chess, since there is no check or check mate possible. A player must capture their opponent’s king as they make a quantum measurement of its location.

The tournament games are timed, however, which is how Kubica prevailed last year over Google’s Doug Strain. Strain simply ran out of time.

Kubica won his first game last year in just a few moves, essentially making use of the unique rules of quantum chess to exploit a weakness in the Sicilian defense. This year he also won his first game in just a few moves, after his opponent—Honeywell’s Byrne Norman—blundered a knight. In the final match, Kubica faced off against Seneca Meeks from Google Quantum AI, who defeated Sam Stanwyck (NVIDIA) and Austin Roberts (D-Wave) to win that final spot. Kubica ultimately prevailed, with Meeks as runner-up.

Among the players Kubica defeated on his path to victory was Sean Weinberg from QC Ware. Their dramatic match offers a glimpse into the unique scenarios that can play out during a quantum chess match. Weinberg actually had the advantage midgame, until a crucial quantum measurement broke in Kubica’s favor. Weinberg lost his queen and decided to gamble with a risky “infinite king run”: splitting his king into a superposition covering multiple locations. Kubica would capture one king, only for Weinberg to split them again.

Alas, a bug in the game suddenly prevented Weinberg from making any more moves. “The two agreed to settle the game with a king face off, where the winner would be decided randomly with probability determined by how little of a king Sean had left,” Q2B’s PR rep, Julia Wilson, told Ars via email. “He then agreed to further reduce the probability that he still had a king after Kubica argued that, had he had more time, he could have captured more of Seans’ ‘kings.’ At the face-off, Sean lost.”