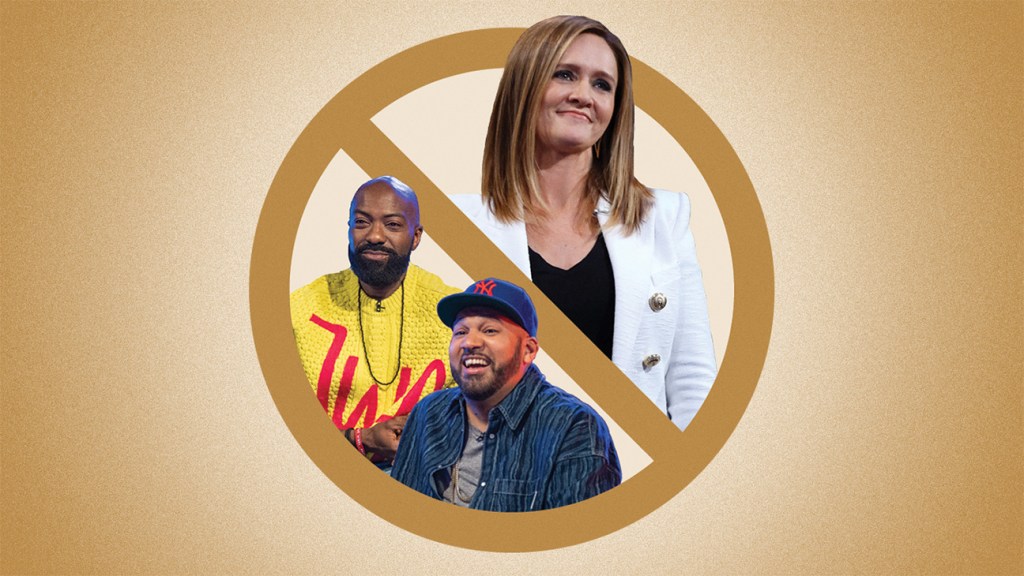 When Full Frontal launched on TBS in 2016, host Samantha Bee’s publicity tour was dogged by questions about her show signifying a shift in the late night comedy space — a space dominated by white men named Jimmy.

It was a media obsession that she tweaked in the premiere, which began with faux reporters peppering her with queries like: “Is it hard breaking into the boys’ club?” and “What’s it like as a female woman?”

Full Frontal With Samantha Bee — an opportunity long overdue for a host who watched as a string of fellow Daily Show correspondents got their own platforms ahead of her — truly was a breakout. It won awards and prompted conversation and controversy.

Though white men named Jimmy still dominate, the late night landscape that Bee leaves now isn’t the same as the one she arrived in; it’s more inclusive. And yet with Full Frontal and Showtime’s Desus & Mero both abruptly concluding, it’s hard not to feel that — for all the proliferation of fresh voices in what was becoming a calcified format — the risk of backsliding is very real.

Institutional gatekeeping played an indisputable role in the decades of late night sameness that forced Bee, over and over, to address why people like Joan Rivers or Arsenio Hall were such unicorns. That said, it’s crucial to recognize that this recent wave of series truncations doesn’t seem to suggest a return of that gatekeeping. We don’t know the exact reasons why Desus & Mero ended, but it had something to do with the relationship between the hosts, whose unique chemistry was wholly responsible for their years of podcasting and talk-show success. Simply put, if Desus Nice and The Kid Mero didn’t want to be partners anymore, it would have been foolish for Showtime to force them.

As for Bee, she and Full Frontal were victims of the Warner Bros./Discovery merger — specifically a shift by TBS and TNT from scripted programs in favor of … well … something else. Nobody is completely sure what those networks will air, but everybody knew this was coming. As the show’s official Twitter feed joked after the cancellation, Full Frontal was already an odd little island of original comedy in a sea of sports and Big Bang Theory reruns.

At the same time, though, the doors that The Daily Show With Trevor Noah and Full Frontal and burst through in 2015 and 2016 have proved quick to open and disturbingly fast to close for women and people of color.

Some of the fresh voices in late night were given time to find traction, even if it wasn’t long-lasting. The Nightly Show With Larry Wilmore, which preceded Noah’s Daily Show coronation, aired more than 250 episodes on Comedy Central over two seasons. A Little Late With Lilly Singh got more than 175 episodes in its two seasons on NBC at an hour so late that Carson Daly stuck around for 18 seasons perhaps because he was the only one awake.

Others did not get the same chance to prove themselves. BET gave The Rundown With Robin Thede only 24 episodes, and despite critical acclaim — the brief first season was good enough to make my Top 10 list in its premiere year, 2017 — and early hints at tremendous versatility, the network inexplicably bailed. Thede was allowed to go off to become a beloved favorite on HBO, which had previously canceled Wyatt Cenac’s Problem Areas after 20 episodes. Patriot Act With Hasan Minhaj ruffled too many feathers and was canceled after 40 episodes, which is still 30 more than Netflix gave The Break With Michelle Wolf.

It’s a tough space — one hampered by major shifts in viewing patterns, with audiences increasingly likely to just watch YouTube clips the next day. Comedy Central has had an even quicker hook with Wilmore’s successors in the post-Daily Show slot, including brief runs for shows hosted by David Spade and Jordan Klepper, so one can’t exclusively point a finger at race or gender. And it isn’t as if all the quickly yanked stuff was that good. I thought Wolf’s Netflix show had extremely funny moments, but it definitely didn’t — and didn’t have time to — settle into anything consistent.

Both Full Frontal and Desus & Mero, on the other hand, had time to find traction, and they were very good.

Full Frontal premiered as the 2016 election was approaching, and while one can imagine Bee would have loved to not need to be angry at all times, her rage and political activism during the administration of our 45th president was cathartic. And her “Little Show in the Big Woods” episodes, shot in the woods of Connecticut by husband Jason Jones, made for some of the most innovative and fittingly poignant content of the early days of the COVID-19 pandemic.

Desus and Mero, in turn, were the perfect hosts for the transition into the 2020 election and beyond. They were able to be political if that was what the circumstances required, interviewing Barack Obama and many of the Democratic candidates in 2020. But they were even more comfortable focusing on viral videos or doing any segment that required them to get very, very drunk on camera.

Both shows will be greatly missed.

But, again, there’s no question that both shows leave behind a more varied late night world. There is not a host on TV whose energy is more infectious — be it infectiously joyful or infectiously disheartened — than Amber Ruffin on Peacock. No host delivers interviews as reliably uncomfortable and, occasionally, unexpectedly revelatory as Ziwe in her Showtime half-hour. HBO’s Pause With Sam Jay isn’t afraid to use humor to tackle very serious topics (see her recent episodes on sexual mistakes and death as prime examples).

And just for fun, let’s acknowledge that diversity can be ideological as well as related to race, gender, sexual orientation, etc. Just because I think Fox News’ Gutfeld! is glib and hacky doesn’t mean that it’s not serving an audience that clearly felt underserved.

And yet, with Full Frontal and Desus & Mero gone and The Late Late Show With James Corden approaching its end in 2023, we’re once again at an inflection point in late night television.

With one white guy named Jimmy leaving, CBS has an opportunity to make a statement about where that slice of the medium is going, and everybody, myself included, has an opinion on what the direction should be. A Tony winner and known commodity in the U.K., Corden was neither an unknown nor a widely expected choice when he was tapped to replace Craig Ferguson in 2014. So if most of my preferences have already been mentioned in this piece, that likely means they’re too obvious.

Trevor Noah is probably too big a name to go from 11:30 to 12:30, even if CBS would represent a far larger potential platform than his current home on Comedy Central. We’ll never know how many people actually watch Ruffin on Peacock, but if the number is even “some,” the NBCUniversal brass would be idiotic not to do anything in their power to keep her around. Daniel “Desus” Nice seems completely capable of hosting a show solo, and he would probably deliver an audience CBS hasn’t been getting otherwise, but there’s little doubt that his sucio — that’s “dirty” in Spanish, CBS folks — sensibility would be an odd fit.

We’ll just have to wait patiently to see whom CBS chooses. Whomever it is, they probably won’t have to field quite as many questions about trailblazing as Samantha Bee did. That’s a good thing. But let’s not get complacent. After so much admirable effort to push late night forward, the past month has shown us just how easily things could slide backward.

This story first appeared in the Aug. 3 issue of The Hollywood Reporter magazine. Click here to subscribe.