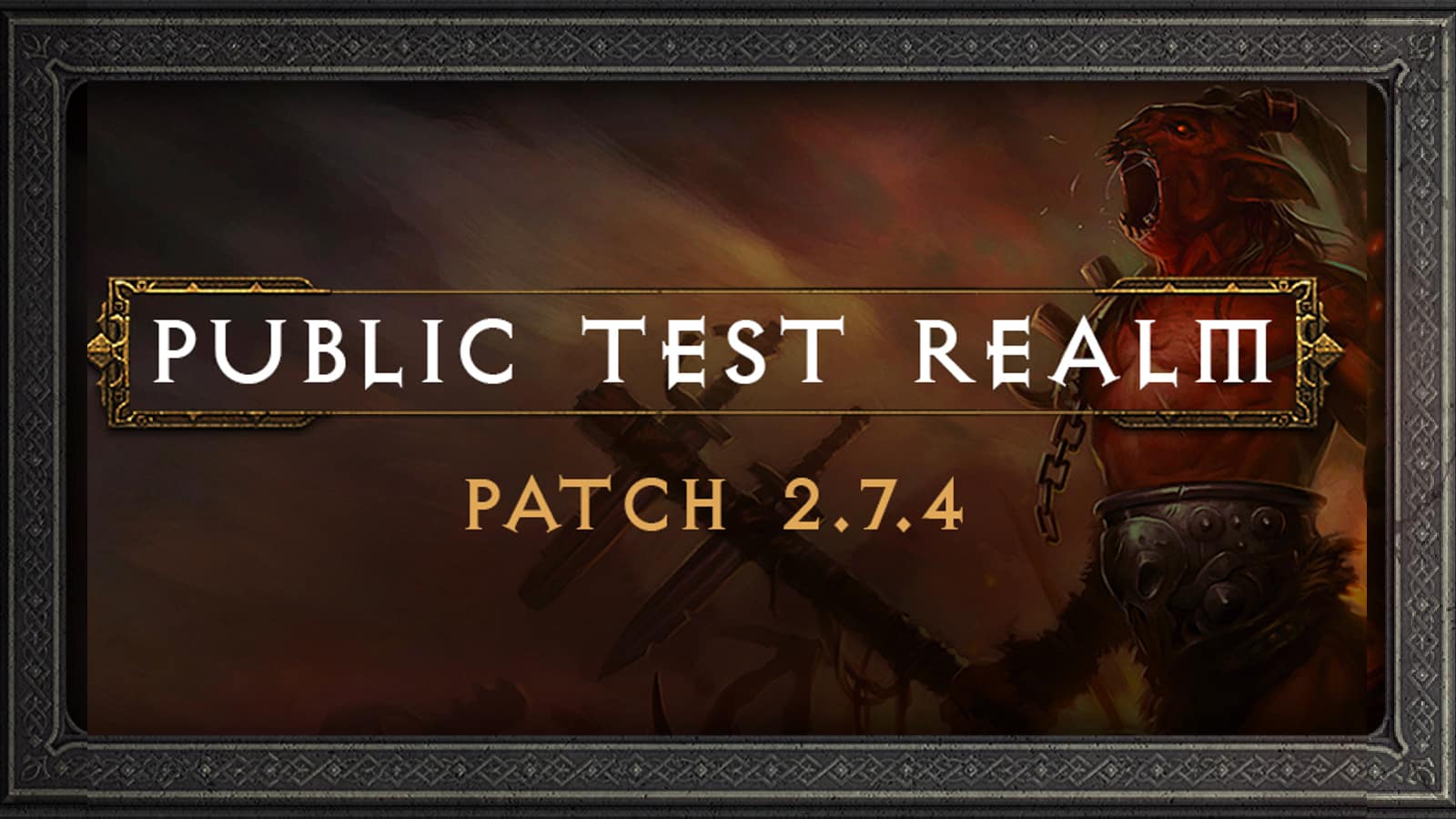 Diablo 3’s next public test realm patch is about to go live ahead of Season 27. Here’s everything we know.

The Diablo 3 16-day public test realm for patch 2.7.4 is upon us and Blizzard is asking for players’ help in “quelling the tides of surging demons.” The game‘s next update will introduce some significant changes before Season 27 of Diablo 3 goes live at some point this summer.

The PTR 2.7.4 patch is different from Season 27, but will likely lay the groundwork for the end of Season 26, and what addictive horrors await us in Season 27. Here are the patch notes for PTR 2.7.4 below including when it will go live and what else to expect.

Hopefully, Season 27 will be as addictive as Season 26 has been.

However, as many of the changes are to usher in Season 27 of Diablo 3, many will likely remain now that PTR testing has concluded. However, we’re still waiting for a release date for Diablo 3 Season 27.

We’ll be conducting the Patch 2.7.4 PTR starting Tuesday, July 12. During this time there may be periodic maintenance, outages, hotfixes, or minor patches.

There will be PTR-unique buffs active to help you on your journey: increased experience gains, and double Blood Shard drops. You can also buy new gear for testing from the special PTR vendor, Djank Mi’em, who will exchange Blood Shards for class-specific bags full of Legendary items that we’d love for you to test! Read down below to learn more on the new vendor updates that have been implemented to assist in the PTR experience starting with PTR 2.7.4.

As with our previous PTRs, this testing period is short, so it’s best to hit the ground running. Whether you’re a PTR veteran or newcomer, we thought we’d pass along a few tips to get you started.

Because of the limited duration of this PTR, we ask that participants pick a particular portion of this update to focus on testing.

For example, if you’re primarily a Wizard player, consider what changes impact the Wizard specifically. What you like best, what you think may still need adjustment, and what you’d want to see in the future (even if that may be beyond the scope of this patch) are all good questions to ask yourself.

Try to break things! Just tell us when you do so we can make sure that the patch’s launch is as smooth as possible.

When providing feedback, focus less on a solution and more on your experience. How did the changes make you feel? Was there something “off” that you noticed? Did something seem wrong or insufficient? Suggestions are always welcome but identifying the issues themselves is most important.

Season 27 introduces a new type of consumable item called Angelic Crucibles. Once uncovered by Nephalem, these heavenly artifacts can be used to Sanctify any equippable Legendary item. Sanctifying an item reforges it to have perfect Ancient-level stats on all affixes while also preserving the item’s Legendary Power. In addition, this process adds one of three new powers unique to each class.

The Barbarian is still a firm favorite in Diablo 3.

Developer’s Note: With Echoing Nightmares transitioning from a Seasonal theme to a permanent feature moving forward, we felt it was necessary to dial back the Experience rewards to avoid players feeling obligated to maximize their time spent inside the activity.

Our vision for Echoing Nightmares is to be a fun bonus activity, like the Vault, that serves as a good source of loot and Augment materials. We’ve also made several changes to Adventure mode and difficulty unlocks—these will align the Diablo III experience across all platforms for new players and should make it easier to jump into your preferred activity.

Lastly, we improved the Uber Boss flow so that players and groups can kill multiple rounds of bosses without having to remake games.

The Necromancer returned in Diablo 3 by popular demand – but as an expansion.

Developer’s Note: We’ve heard from players that the Crafted 3-piece sets have had some of the most significant impacts on itemization, so we’re introducing another to add more choice.

Developer’s Note: Our goal with the Armor of Akkhan rework is to narrow the focus of the set to give a distinctive identify, highlighting a fantasy where the Crusader is the Knight-Commander, passing judgment on the enemies of the Light.

Developer’s Note: We wanted to recapture the Blood Necromancer fantasy of Trag’Oul’s Avatar and increase its effectiveness against single targets.

Developer’s Note: Delsere’s Magnum Opus has been feeling weak, clunky and isn’t meeting the desired gameplay flow, so we’ve streamlined the playstyle to make it more engaging, allowing Wizards to feel like masters of time. The core of Tal Rasha’s Elements has changed over time, so we’re revisiting it to reintroduce a playstyle that utilizes Meteor.

Developer’s Note: Inna’s Mantra Monks have been riding high on the waves of success for several seasons, so it’s time to bring in the nerf shark.

The Crusader is a classic tank in Diablo 3.

To participate in the public test, you must have a Diablo III game license attached to a Battle.net account in good standing (i.e. one that hasn’t been suspended or banned). In addition, you will also need to download and install the Blizzard Battle.net desktop app if you have not already done so.

The option to copy your existing Diablo III characters from your live account to the PTR will be available and can be done directly through the PTR client. However, only one region per account can be copied at a time. So, if you choose to copy characters from your account in a different region, any previously copied PTR characters will be lost.

In addition, you can only copy characters over to your PTR account once every 24 hours. Attempting to copy characters before this cooldown is up will result in an error.

As this is a test server, please anticipate uneven game performance, and note that restarts and downtime may occur without warning.

So that’s everything we know so far about Diablo 3 patch 2.7.4 and the PTR

Looking for more Diablo 3 content? Be sure to check out our other guides below: