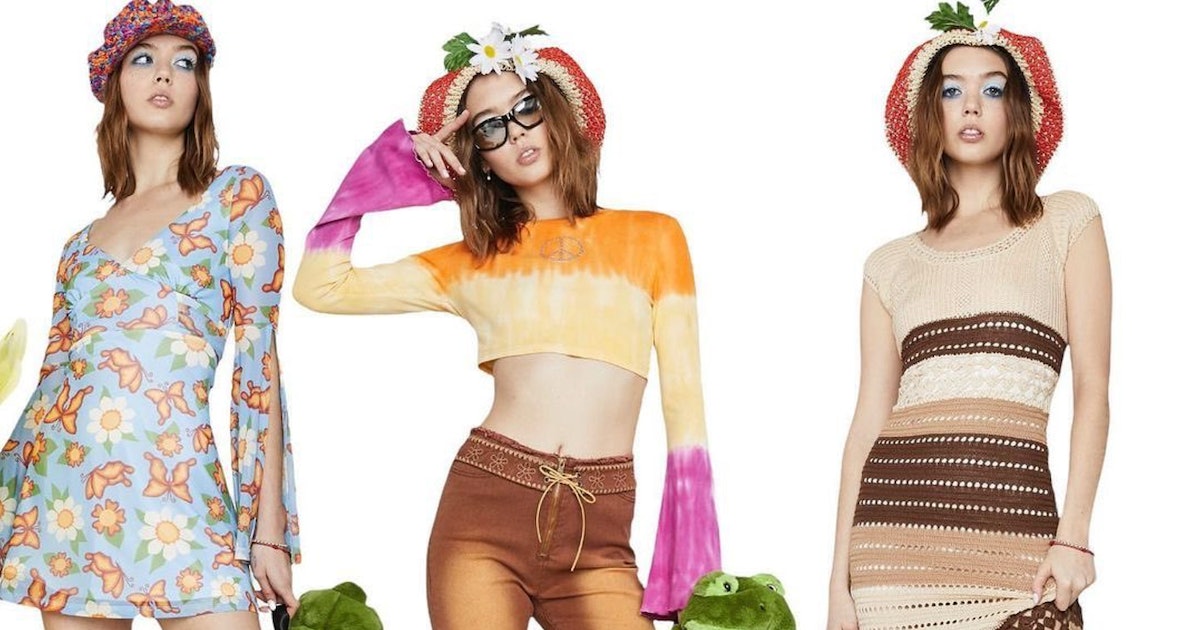 If the style on your social media suddenly feels straight from a late ‘90s mega-mall, you’re not imagining things. Many millennial-loved brands have come roaring back into the fashion zeitgeist in a very big way: J. Lo’s in head-to-toe Coach, and Addison Rae’s promoting American Eagle dresses and boots. Here’s just a sampling of the many familiar names you might be seeing on your Instagram or TikTok feed lately: Marc Jacobs, Abercrombie & Fitch, Bebe, Converse, Vivienne Westwood, Wet Seal, GAP, and (my personal favorite) Delia’s by Dolls Kill. These iconic companies seem to be holding their own in an already oversaturated market, and part of their success is rooted in the nostalgia. “Remember how much you loved these clothes growing up?” the message seems to be. “Well, we’re back, and the cool Gen Zers love us, too!”

The Y2K trend “moment” is a part of this, certainly, but that’s only a piece of the larger fashion picture. “It’s the same circular fashion trend that brought Banana Republic and J. Crew to the top of the fashion lexicon 10 years ago — the people who wanted to shop there finally have the incomes to afford it, and they have hired the people who loved them when they were younger to reinvent their brand,” says Amanda Mitchell, a senior beauty writer, podcaster, and millennial.

It can feel weird, seeing the clothes you coveted decades ago return to the cultural conversation — the opportunity to buy Delia’s again delights my middle school self… and is also a keen reminder of how my style’s a lot less costume-y. But the straddling between two generations with seemingly dissimilar tastes is, at least for now, an effective tactic. The big question remains: will these mega chains and designers make a dent beyond this moment? Or is this just another whirlwind trend, here today and gone (again) tomorrow?

Y2K And ‘90s Labels Through The Gen Z Lens

The tension between ‘90s and ’00s brands delivering for two seemingly different generational needs is a buzzy concept. “Any sort of generational trend war is a marketing tactic — it amplifies the fact that low-waisted jeans might be coming back, and then the next thing you know, there they are for you to buy,” says Alyssa Hardy, millennial, former editor at both InStyle and Teen Vogue, and author of the upcoming book Worn Out: How How Our Clothes Cover Up Fashion’s Sins.

One thing to note about Gen Z consumers, for example, is that they don’t shop like ‘90s kids did — at the mall and in person. If something’s catching a younger consumer’s eye, it’s usually because of direct-to-consumer marketing tactics: ads, trends, and influencers on social media. The Vivienne Westwood pearl choker necklace and now the pendant necklaces, particularly unboxing and try-on videos, have gone viral on TikTok. Shoulder bags are back (particularly among it-girl celebs like Kendall Jenner and Hailey Bieber), which means more attention to classic Coach and Marc Jacobs styles.

Kendall Becker, fashion editor, trend forecaster, and Gen Zer, explains that, in her experience, online nostalgia has had particular allure for younger consumers during recent tough times. “I think the rise of the Juicy sweatsuits in 2020 was the ultimate epitome of this — we’re stuck inside but let’s have a laugh. You bet I was Ebay-ing tracksuits and rewatching The Simple Life!”

Even with all this renewed interest, Molly Alexander, fashion blogger, personal shopping assistant at Bergdorf Goodman, and Gen Zer, says that her generation has a different kind of relationship with clothing brands than we did. “I would say more confidently that Gen Z loves ‘refinding’ millennial brands more than being true consumers, in the sense that social media and specifically TikTok has allowed them to [pick and choose] with nostalgic songs, fashion trends, and especially random hidden gems like an Abercrombie comeback,” she explains. She’s renting a Marc Jacobs bag and loves the Coach camera bag, but they act more as general inspiration for her wardrobe — she’s less likely to invest in those exact items for her own closet.

Also, because younger consumers see the ‘90s in general as a trend (and trends move lightening-fast these days), relying on the pull of the familiar isn’t going to be an effective long-term strategy. “Ultimately, the novelty of this millennial to Gen Z brand pipeline is going to wear off, and I think that’s already starting. The news of revitalizations isn’t as noteworthy, per se, and can feel less organic while blending in with the rest of the pack,” says Becker. Her advice to companies would be to carefully weigh the pay-offs and drawbacks of playing to an entirely new demographic. “I’d urge them to take a step back and really consider if this is the best move before altering their image. While it’s crucial to keep up with the times from many angles, there’s also nothing wrong with ‘growing up’ with your current customer.”

So Y2K-only brands may have a limited shelf life, if we’re to believe the forecasters. But some ‘90s and early ‘00s brands brands are using the renewed attention to fundamentally evolve as a mix of modern and classic. “[Brands] like Abercrombie seem to have refocused their design strategy to include both the older millennial taste and the younger Gen Z style, which incorporates elements of the ‘90s and Y2K. That will have a more lasting impact,” explains Hardy.

It’s particularly interesting that Abercrombie — with its complicated history around marketing and hiring — is reckoning with its past as they’re reinventing themselves for the 21st century. “Older brands seem to be returning quieter than they were before,” Hardy says. “A quiet resurgence [for Abercrombie] is probably for the best from a PR perspective.”

For now, that strategy appears to be working. Abercrombie has effectively overhauled the entirety of their offerings, and customers — new and established — are into it. “Their clothing quality, fit, and sizing options are also setting the new standard in fashion, and I think their overnight new success is going to change the way brands evolve,” notes Mitchell. “They actually evolved, for the greater good of us all. ‘I got it at Abercrombie’ is about to be the new ‘Oh, it’s from Target.’”

Coach and Vivienne Westwood are luxury examples of this rebranding. “[Coach has] found a way to take their iconic logos and showcase them in tongue-in-cheek ways while partnering with of-the-moment talent for campaigns. It feels fresh!” says Becker. “Vivienne Westwood … embodies Gen Z’s craving to stand out with fashion. It’s a moody subset of consumers, and the grunge-y feel has been resonating across the board from fashion to music (hello, Olivia Rodrigo and Machine Gun Kelly).” Even Delia’s, my old favorite that is still leaning heavily nostalgic, has more inclusive models in its marketing and includes some classic pieces amongst its covetable costume-y items.

According to Erica Levine Ryan, Bebe Global Director of Marketing, the key ingredient to a successful comeback is leaning into the brand identity. “What people may not know is that Bebe opened its first store in 1976. Contemporary fashion as we know it, and definitely affordable fashion, didn’t really exist. Bebe helped change women’s accessibility to attainable yet aspirational fashion,” she says. The brand’s iconic crystal logo tees and hats (truly, staples for anyone who graduated high school between 2000 and 2006) remain an important part of its offering, alongside bandage dresses and denim. However, she points out: “Where our Bebe brick and mortar stores and malls were our original anchor, we now have a very strong online business as well.”

At its core, adaptability to a new generation of shoppers — while retaining some core DNA at the same time — is the complicated juggling act some established brands are pulling off. Judging by the results, it’s the secret sauce for millennial brand longevity.

A Glimpse At The Future Of Millennial Brands

The entire fashion industry is still grappling with long-term issues that have been around for decades — problems that were around in the late ‘90s and early aughts and have only become more challenging. Because younger consumers are constantly trying to reinvent their personal styles, for example, they rely on fast fashion brands to keep up with whatever’s happening on social media. “The brands making the most noise with Gen Z are the Sheins and FashionNovas of the world, and the millennial fast fashion brands like Forever21 are just doing everything they can to keep up,” explains Hardy.

Millennial brands will need to continue addressing the problems in their production processes, such as slashing or otherwise destroying unsold goods (including, most notably, Amazon) so no one can use it. “The resurging brands have just as many problems within their supply chains as they did before. For some, it’s even worse now as trend cycles have sped up. That’s a huge issue,” says Hardy.

“I think there is a misconception that younger generations are significantly more sustainable with fashion than others. While I believe there is social awareness and an effort, especially as they continue to prop up the secondhand market, fast fashion can be clever and captivating for even the most in-tune consumer,” she adds. “One positive is that younger consumers seem to understand the impact of consumerism on labor and the environment in ways millennials didn’t. They are shopping quite a bit, sure. But they are also vocalizing their problems with brands, which will hopefully create change.”

Another important problem with turnover is the constant, ever-shifting desire for new and improved looks — like the aversion of some younger influencers to rewear an outfit (a tactic that retailers leverage to sell new items). So if you ask a 20-something in the know, it’s actually not the worst idea to have some “older” influence in their style. “We grew up so different, style-wise, compared to millennials. Gen Z looks older for being younger, and I feel like millennials have appropriately dressed/looked their age their whole life,” says Alexander. “I feel like millennials were much more authentic and Gen Z cares about what everyone else is doing — largely in part due to social media.”

She hopes that this moment of ‘90s and ‘00s revival can have a longer impact. “Gen Z at times seems to appreciate very little about millennial fashion,” she adds. “I’m hoping and somewhat optimistic that these older brands can make an indent like they used to.”

(Stay Up To Date)