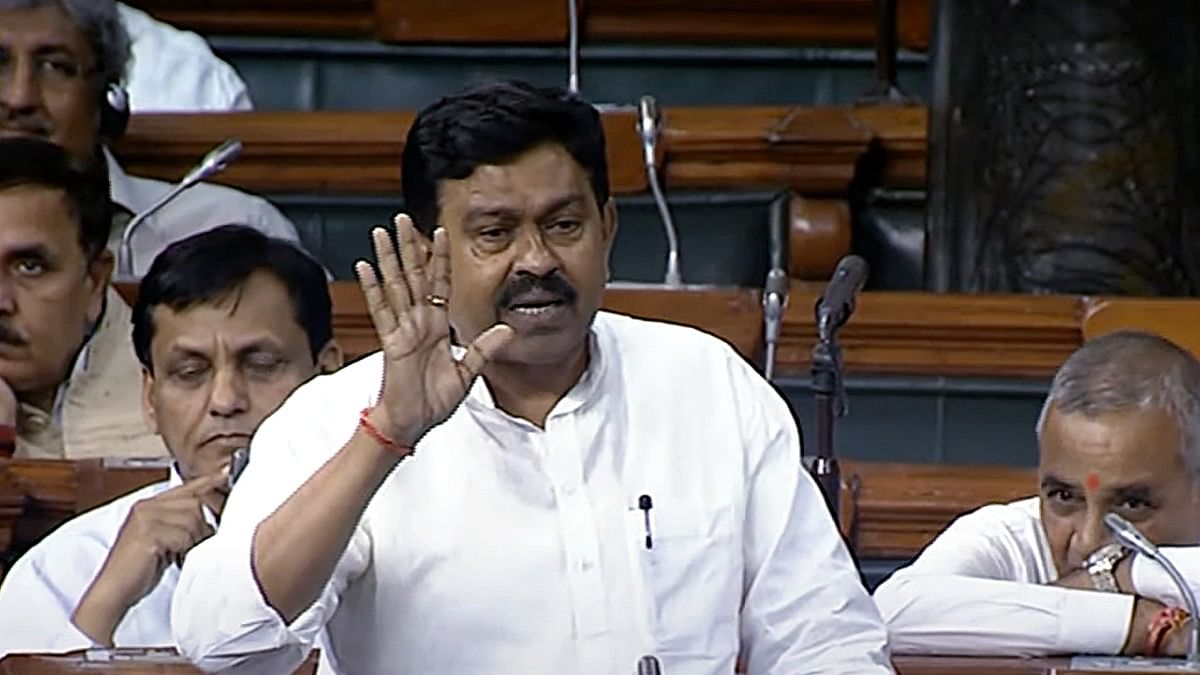 Lucknow: As protesting farmers once again ratchet up their demand for his removal, Union minister Ajay Mishra ‘Teni’ has lashed out at farmer leader Rakesh Tikait, calling him a do kaudi ka aadmi (literally, ‘a man worth two pennies’), and talked about being chased by “barking dogs”.

The Kheri MP’s comments — made in a speech to Bharatiya Janata Party (BJP) workers in Lakhimpur Monday — come days after thousands of farmers led by the Samyukta Kisan Morcha (SKM) and Tikait’s Bharatiya Kisan Union (BKU) held a mahapanchayat in Lakhimpur Kheri district to demand the withdrawal of cases lodged against farmers in relation to last year’s violence there, and sought Teni’s sacking from the Union cabinet.

The junior home minister’s son, Ashish Mishra, is the main accused in the violence that took place in Lakhimpur Kheri in October last year, when an SUV was rammed into a crowd of protesting farmers, leading to the deaths of four farmers and a journalist. Ashish obtained bail from the Allahabad High Court in February, but this was overturned by the Supreme Court in April.

In a video of the speech, now viral on social media, the minister is heard saying: “For instance, we are travelling to Lucknow. We are speedily heading towards Lucknow seated in a vehicle….several times, it happens that dogs keep barking on roads. They are barking down the roads and, at times, chasing vehicles. So, this is their nature. I will not say anything about that. A person behaves according to his nature, but our nature is not like that. When things come to the fore and when people gather strength to come forward, I will definitely answer every person.”

Urging the BJP workers to continue to give him strength, he said that with their support, “no power in the world” could leave him hopeless .

Mishra went on to launch a tirade against Tikait, saying, “I know Rakesh Tikait very well. Do kaudi ka aadmi (a worthless man)…we have seen that he fought elections twice and lost his deposit each time. When this kind of person opposes someone, it has no meaning…so I don’t want to respond to such people,” Teni said. Tikait contested and lost in both the 2007 UP assembly election and the 2014 Lok Sabha election.

“There is no relevance inresponding to such people, but this is what keeps his politics alive… This is how his livelihood is sustained. So, let him run it…I will respond at the right time, but I will definitely say that I have never done anything wrong in my life,”
he added.

‘Angry because his son is in jail’

Later, Tikait responded to the barbs, saying the minister was angry as his son was
behind bars.

“We went with around 50,000-60,000 people…So, a person will say something in anger. His son has been lodged in jail for the past one year so he obviously will get angry. We don’t have to go by these statements. Whatever we do, we do on the ground. Ek mukti abhiyan (a freedom movement) will be run in Lakhimpur… We stayed there for three days…now we will stay there for 13 days. Lakhimpur has goonda-raj (lawlessness),” Tikait told the media.

Thousands of farmers had congregated in Lakhimpur Kheri on the SKM’s call to participate in a 72-hour-long protest against the Centre that ended on 20 August.

“Many people keep asking me. There are some journalists here…Some foolish journalists are also there who keep on talking like this. They have no links with journalism but indulge in wrong talk and try to create confusion, but I only want to say one thing — Mujhko tum barkha na samajho aag ka dariya hun (Don’t think of me as rain, I am a ball of fire),” he said.

It’s not the first time that the Union minister has vented his anger towards the media. In December, Mishra had purportedly abused journalists on being asked about his jailed son.