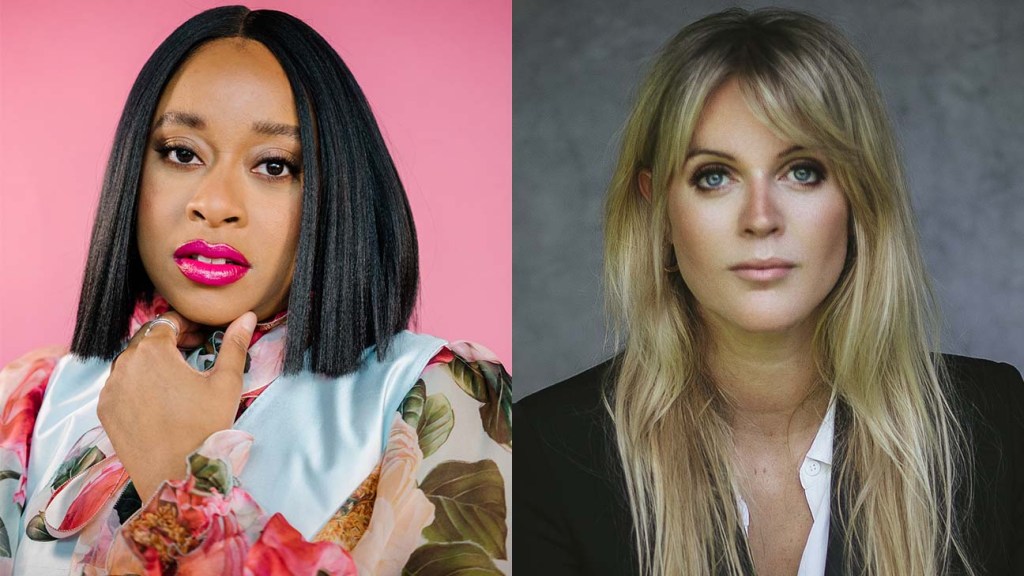 At first glance, Everything’s Trash and Everything I Know About Love may seem most similar for their titles, the two monikers rife with potential for a “Who’s on First” style conundrum. Both series deal with the perils and pleasures of being young in the big city. Everything’s Trash‘s protagonist Phoebe, a well-known podcaster living in New York City, is at that particular intersection of young adulthood where career momentum hasn’t yet translated into the life she’s hoping for; whereas Everything I Know About Love‘s Maggie has just moved to London with three girlfriends (post-uni) and is trying desperately to get her foot into any professional door she can. Trash’s Phoebe is navigating the specifics of being a Black woman in a field that still mostly belongs to white men; Love‘s Maggie is navigating the sexual politics of young adulthood.

But where the two shows truly converge is in their origins: Both are adaptations of bestselling memoirs, that were translated into their mostly fictional onscreen versions by the memoir writers themselves. Love, pulled from Dolly Alderton’s 2018 memoir (of the same name) dropped on Peacock on Aug. 25 after airing in her native UK earlier this summer. “All of my written work, whether it’s my memoir or novel or column, is very emotional and quite sincere, so by its nature, it tends to resonate with people because every one of us has experienced heartbreak,” Alderton tells THR. “But it was next-level with the television show. People are engaging with that world so passionately.” The adaptation of Phoebe Robinson’s second memoir Everything’s Trash, But It’s Okay is currently in the middle of its first season on Freeform — the season finale airs on Sept. 7. “I always try to keep an arms-length distance from feedback because I want to just make what I want to make,” says Robinson. “But you know, I have been on Twitter and the comments have been mostly good [laughs]. It’s really cool to have a sense of community with the viewers.”

Robinson and Alderton both spoke to THR about the very unique process of taking your most personal words and translating them, via group project, for a wider audience — and what they learned about themselves and their craft in the process.

On their adaptation journeys

Alderton’s show was in the works before she’d even finished writing the source material. She sent out the first half of Everything I Know About Love on submission to book agents nearly six years ago (at age 28), and a scout got their hands on the proposal and sent it to production company Working Title, who optioned it nearly on the spot. “It was a very lucky and privileged position to be in, but I did have to pretend that the adaptation wasn’t going to happen in order to be able to focus,” says the author, now 34. “I couldn’t finish writing my life story while also thinking about how it would translate cinematically.”

Robinson shopped an adaptation of her memoir herself. She launched her own production company, Tiny Reparations, in 2019 and teamed up with ABC to develop a half-hour sitcom in which she would star. Her agents set her up on showrunner blind dates, of sorts, and, eventually, she met with TV veteran Jonathan Groff, known for his work on Happy Endings and Black-ish. “I wanted a Black woman, but my agents felt like I was really going to get on well with Jonathan,” she says. “We FaceTimed and just had a blast — we’re both comedy nerds, and he’d read my book and the same essays that resonated with him were really resonating with me at the time.” The pair zeroed in on Everything’s Trash, But It’s Okay as their source material for the sitcom — “It’s slightly aspirational, but still grounded in reality, especially in terms of finances and what it’s like to live in New York as a creative” — and built out the show from there.

On fictionalizing their life stories

“I always want to try and write the most interesting story possible, and when you’re working on a series in a writers room, you want to take advantage of everyone’s different experiences,” says Robinson of deciding to forgo a strict adherence to her memoir’s plot specifics. “The rule was, the funniest or the most moving idea wins, and we build a world based on that. We knew we wanted to be true to the spirit of the book, but we wanted to have the flexibility to tell great stories for TV.” The result was a protagonist, played by Robinson, who very much mirrors the real Robinson in her sensibilities and sense of humor. The show’s Phoebe is also a podcaster living in Brooklyn, but they added fictional side characters and gave her a brother in the same borough (Robinson’s real-life brother lives in Ohio). “I wanted to prioritize the brother-sister relationship,” she says. “We are quite close, and I felt like I hadn’t seen a show that put that dynamic front and center.”

Alderton’s creative team initially considered following her memoir closely but quickly abandoned the idea: “You’re so constrained when you’re only following the plot points of reality; it just doesn’t provide a juicy-enough story.” She describes the fictionalization process as taking the essence of the book and placing it in an unlimited wonderland of details and characters. “We knew we wanted it to be a central love story between two childhood best friends and that the big moment of tension would be one of them falling in love for the first time,” she says. “I wanted it to be a celebration of the entanglement of female house-sharing and the claustrophobia of closeness — the intimacy and silliness and grossness of girls living together.”

Robinson also felt strongly about staying true to a few real-life elements of her book, namely its discussions of money and financial security. “When my podcast Two Dope Queens came out in 2016, and it was number one on iTunes, people assumed that because I had success that I had a lot of money,” she says. “But I was still struggling with student loans and credit card debt, and I wanted to show that in this character — that even though she has this career momentum, she doesn’t have everything, that she’s still trying to figure things out.”

On learning to go from solo writing to group projects

Everything I Know About Love is very much an un-sanitized depiction of youth — Maggie and her roommates are shown drinking, doing drugs and having sex. It was that kind of “freewheeling rawness” that Alderton was worried about needing to negotiate on with a network. She produced the show with the BBC and describes a pleasant surprise in the way executives approached the more elicit material from her memoir. “There was this funny thing that happened that I’m sure will sound like the most British thing ever,” she says. “All of the potentially offensive items are elevated to various people at the network, and at the end of it, we got an email that said, ‘We can see editorial justification for all fucks and c—ts.’ I got it on a Friday afternoon and was like, ‘drinks on me at the pub tonight!’”

Robinson noticed the difference between book writing and television writing most starkly with the process of network notes. “When I wrote my books, my editor gives general ideas for changes, I take whatever I want and leave the rest, and it’s not brought up again,” she says with a laugh. “In TV, you have to have more of a conversation about things. One of the areas where I grew the most with this experience was being able to sift through feedback and understand that everyone wants the show to succeed — they’re not giving you notes because they don’t trust you.”

On viewing their own stories differently

“I’m certainly grateful I wrote the script at age 33 and not younger,” says Alderton. “The further you get away from your youth, the more understanding you have of what mattered and what was ephemera.” She remembers a particularly poignant scene from the show that calls for Maggie to confront her own reflection in the mirror; the script notes wrote of Maggie taking in her face, which she has been picking apart since she was 13 years old. “Seeing those actresses visually in these situations, I felt more compassion than I have ever felt before, compassion for the feeling of not knowing your value in the world and still feeling confused about who you are.”

Robinson, for her part, has been using her show to reflect on how far she’s come in her career and her life, especially when it comes to finances (a topic of the series she says she’s gotten a lot of positive feedback about). “I feel proud of where I’ve gotten. When I wrote on the first season of Portlandia, I took all that money and paid off my credit card debt, and it made me feel ready for the Phoebe 3.0 life that I wanted to have. Now I have the book imprint and production company, and I don’t feel like I have to say ‘yes’ to every job out of fear that the money is going to dry up. And it’s helped me figure out where I want to go, which is to a place where I’m even more confident and can prioritize my personal life. I know I want to try and enjoy things.”