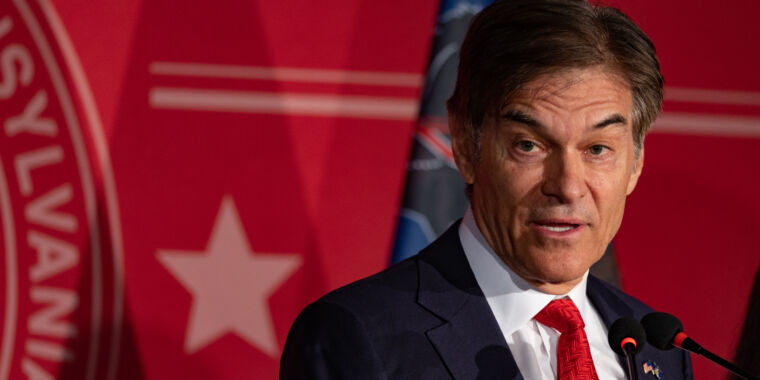 In the early days of the COVID-19 pandemic, Mehmet Oz—aka Dr. Oz—repeatedly emailed top-level Trump administration officials, urging them to push the ineffective malaria drug, hydroxychloroquine, to treat COVID-19 based on scant, sketchy data from a now-disgraced French researcher.

Emails from the notorious celebrity doctor were revealed for the first time Wednesday in a report from the House select subcommittee on the coronavirus crisis. The report, titled “A ‘Knife Fight’ with the FDA,” delved into how the Trump administration worked to undermine, pressure, and bully the Food and Drug Administration during the pandemic.

Specifically, it unearthed how the Trump White House pressured the FDA to bend safety standards so that COVID-19 vaccines could be released before election day. It also revealed the tenacious efforts and subterfuge by top Trump trade advisor Peter Navarro and advisor Steven Hatfill to pressure the FDA into supporting the use of the debunked malaria drug. The report’s title stems from a direct quote from Hatfill that the White House had a “knife fight scheduled with the FDA” over hydroxychloroquine.

Both efforts were ultimately unsuccessful—the FDA did not authorize vaccines before the election and nor did it re-authorize hydroxychloroquine after it was clear it was not effective. But the administration’s actions caused lasting damage to the FDA, the country’s pandemic response, and public trust, the report concludes.

“As today’s report makes clear, senior Trump Administration officials undermined public health experts because they believed doing so would benefit the former president politically—plotting covertly with known conspiracy theorists to dangerously push a disproven coronavirus treatment, bullying FDA to change its vaccine guidance, and advocating for federal investigations into those who stood in their way,” Select Subcommittee chair, Rep. James Clyburn (D-SC) said in a press statement. “These assaults on our nation’s public health institutions undermined the nation’s coronavirus response—and are precisely why we must never again settle for leaders who prioritize politics over keeping Americans safe.”

But before Navarro and Hatfill spearheaded efforts and “work from the shadows” to champion a junk COVID-19 remedy, there was Dr. Oz, who was equally eager to promote the unproven treatment.

Oz, who has a long history of peddling unproven treatments and health scams, was quick to jump on the hydroxychloroquine train. Days after the small, dubious French study—led by a now-disgraced microbiologist—suggested that hydroxychloroquine was 100 percent effective at treating COVID-19, Oz sent emails to Trump White House Coronavirus Response Coordinator Deborah Birx and Trump’s son-in-law and White House senior advisor, Jared Kushner, pushing for hydroxychloroquine.

On March 22, Oz sent Birx a series of emails complaining about a “coronavirus drug shortage” and prodding her to help expand access to hydroxychloroquine. He also claimed that the drug had “confirmed clinical benefits.” The next day, Oz emailed Kushner, saying that Trump should “push academic centers to move more expeditiously” on hydroxychloroquine trials. Kushner responded, “What do u[sic] recommend to speed it up?”

In those emails, Oz mentioned plans to run a clinical trial of hydroxychloroquine with his own money. Earlier this year, a representative for Oz confirmed to the New York Post that Oz spent nearly $9,000 of his money to buy more than 2,000 hydroxychloroquine tablets in 2020. And he was reportedly prepared to spend $250,000 to fund a clinical trial at Columbia University.

On March 28, Oz emailed Birx again about the French study. Birx forwarded his message to then-FDA Commissioner Stephen Hahn with the note, “We should talk.” That same day, the FDA granted a controversial emergency use authorization for hydroxychloroquine and chloroquine, allowing use against COVID-19.

In June, the FDA reversed the decision, sending Navarro and Hatfill on an unsuccessful mission to get hydroxychloroquine reauthorized. And numerous studies have subsequently found the drug ineffective and potentially harmful for treating COVID-19 patients.

Oz, a crudité aficionado who is now running as a Republican Senate candidate for Pennsylvania, ultimately scrapped the hydroxychloroquine clinical trial idea and reportedly donated the pills to an unnamed hospital.