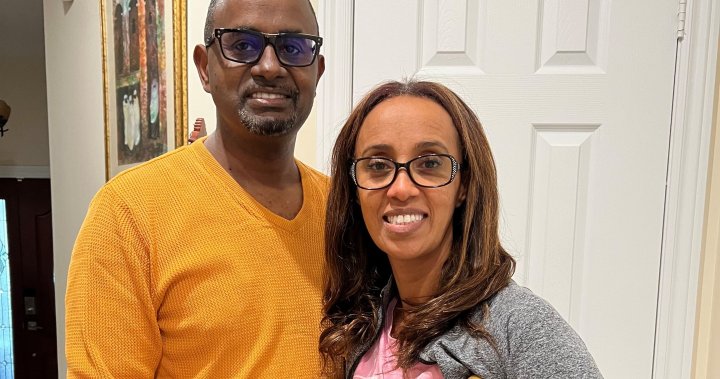 Melanku Game and his wife Janet Game are worried they might not make it home in time for Christmas. A flight to Africa last month to do humanitarian work turned into a procedural mess.

“We’re setting up for an eight-country regional cancer treatment centre of excellence to be built in Ethiopia,” Melaku explained.

The couple have lived in Canada for three decades. Melaku is a doctor at the Royal Alexandra Hospital and Cross Cancer Institute in Edmonton.

Although the Games flew in and out of Ethiopia, Melaku’s meeting about the cancer centre was in South Africa, one of the countries Canada recently imposed stricter travel regulations on due to the Omicron COVID-19 variant.

By the time the couple arrived in Toronto, it had been 13 days since Melaku was in South Africa. Janet had never gone to South Africa because she broke her leg, tripping on a staircase in Ethiopia.

The doctor hoped they wouldn’t have to quarantine. He is triple vaccinated and Janet is double vaccinated.

Both had negative PCR tests from Ethiopia, he said, and Melaku also had one from South Africa.

But when they arrived, public health officials told them they’d still need to isolate. Melaku said he was worried about Janet’s broken leg and asked if there was any alternative.

“He said we will be fined. And we said it would be OK to receive a fine, if we were to be able to go home and finish the required quarantine,” Melaku explained.

The worst part, they say, was that when they went to catch their flight to Edmonton, the pair was denied. They were told their names had been flagged as having to quarantine in Toronto.

“That’s where we found out that we are persona non-grata here for Air Canada… or any other airline,” Melaku said.

So they went to a quarantine hotel, where they say they weren’t given sufficient food, especially for Janet, who has celiac disease.

“I felt personally I was treated like a criminal. I have done something wrong, whereas we, taxpayers, we are Canadian citizens,” Janet explained.

The couple have since retained a criminal defence lawyer, Joseph Neuberger. He said he’s disturbed by their experience.

“The Games didn’t get breakfast, they didn’t get dinner. I have clients in custody who are treated far better than this,” he said.

After Global News did a story on the Games, they were eventually given appropriate meals.

But even though they tested negative for COVID-19 upon landing in Toronto — they got their results Sunday — the couple was not released from the quarantine hotel until Thursday, they said.

They say the public health official who cleared them assured them they would be able to fly home, but once again they were denied at the airport and told they were to quarantine until Dec. 18, Melaku told Global News.

Now stranded, they found a basement suite to stay at while they wait, hoping for a speedy resolution.

“We’ll file for a trial with these tickets they received and hopefully I’ll have them over to a lawyer to commence a lawsuit against the government for this inhumane conduct,” Neuberger said.

“Travellers coming behind us should receive a better treatment in all the processes, and they shouldn’t go through what we have gone through,” Melaku explained.

Global News reached out to the Public Health Agency of Canada, but was told it won’t discuss individual cases with media.