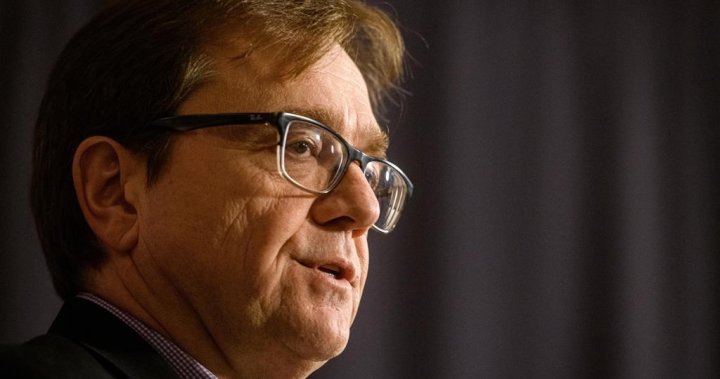 In a country intent on helping to slow global warming without destroying its economy, Canada’s latest natural resources minister says his department can no longer be thought of mainly as the ministry for fossil fuels.

But Jonathan Wilkinson also says the Liberals are not singling out the oil and gas sector to do an unfair amount of heavy lifting in the fight against climate change because all industries that contribute to the problem have to be part of the solution.

Wilkinson is three weeks removed from the cabinet shuffle that made him the fourth natural resources minister in the last six years. Now after helming the environment department tasked with combating climate change, he’s in charge of the department that regulates and promotes many of the products that cause it.

But when the 56-year-old former clean tech CEO took over Natural Resources Canada, some saw it as a signal the department is going to evolve to prioritize clean technology in a way it hasn’t yet done.

“I would agree with that,” Wilkinson said, in an interview with The Canadian Press, about his priorities for the new job.

The push-pull between the fossil fuel sectors that the world, and Canada, have relied on for decades, and the science that blames the burning of fossil fuels for the increasingly warmer planet and associated climate destruction, was on full display in the last two weeks at the United Nations COP26 climate talks in Scotland.

Environment advocates argued hard that the only way to keep global warming from becoming catastrophic is a full-scale phase out of the use of fossil fuels. The creation of a Beyond Oil and Gas Alliance, an initiative to phase out fossil fuels entirely, was among the most talked-about initiatives to come out of COP26.

The Quebec government signed on as an associate member but Canada did not.

Wilkinson, who spent several days at COP26 pushing Canada’s position on phasing out fossil fuel subsidies, but promoting the development of hydrogen, said the all-or-nothing polarized positions on oil and gas production are difficult. He said he still sees a role in Canada for some fossil fuels as long as they are not contributing to greenhouse gas emissions.

That includes, he said, using bitumen for non combustible uses like asphalt or carbon graphite, and extracting hydrogen molecules from natural gas, as long as that is done with technology that first reduces and then eventually eliminates the greenhouse gas emissions that come from that process.

“Those are things we should be looking at because at the end of the day, we’re interested in good economic outcomes and no carbon emissions,” he said. “So I think that’s the way people need to think about it, rather than taking the polar position, which is no fossil fuels or fossil fuels are going to continue forever.”

Wilkinson is less bullish on the future for most oil and sees no pathway in Canada to keep using coal because the technology and geological formations needed to capture and store its emissions will not be both affordable and prepared for the 2030 deadline to phase out all “unabated” coal-fired power plants.

“On the oil side. I mean, look, it is primarily a transportation fuel and we’re all committing to actually go to net zero vehicles,” he said. “And so over time, you are going to see a reduction in the amount of oil being used, being combusted for the purposes of transportation That’s just logic.”

Carbon capture technology overall is also not a massive, long-term solution to allow the continued burning of fossil fuels for energy, said Wilkinson, because the geological formations needed to store the gases don’t exist everywhere.

His priorities for the first months of his new job are to work with oil and gas provinces to develop the cap on oil and gas production emissions the Liberals promised in the recent election.

“Some people say that we’ve singled out the oil and gas space and to that I actually say that’s just not true,” he said. “If you read the rest of the climate planet, for example, in the in transportation space, we said hard stop of the sale of internal combustion engine vehicles after 2035 for the same reasons.”

He said one of his priorities is working with those regions affected to ensure the transition away from fossil fuels is a positive one.