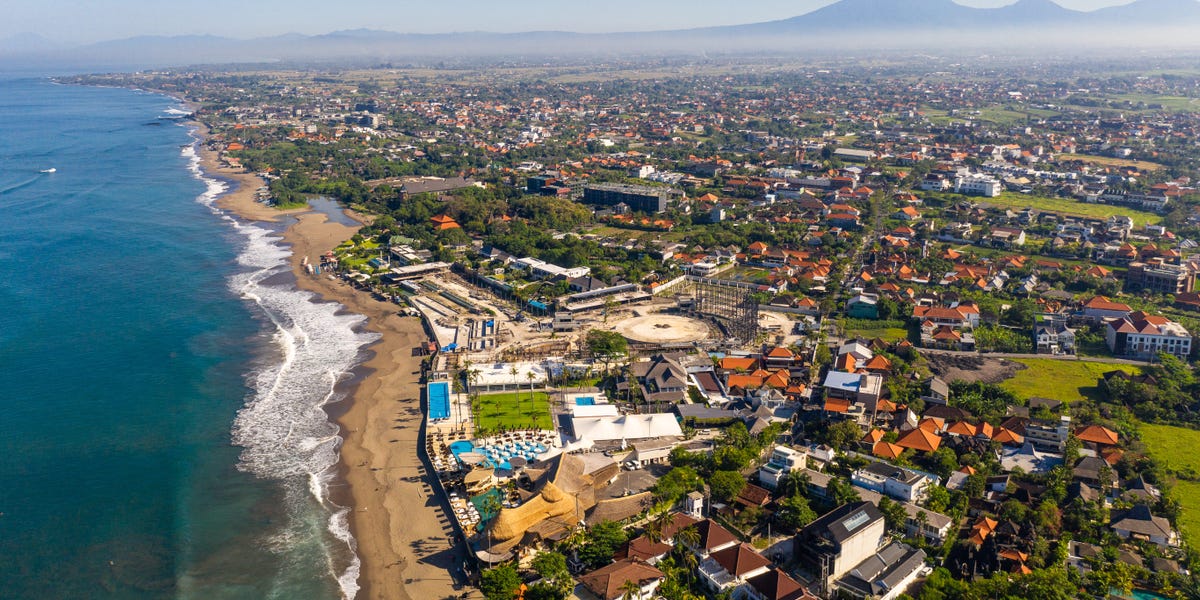 After living in Hong Kong for the past 34 years, British businessman Steve Moore was looking for a new place to spend his semi-retirement days.

He already owned properties in the UK and on the Thai island of Phuket, as well as in Hong Kong, where his fashion-garment trading business is based. But with Hong Kong in a state of ongoing, COVID-related lockdowns, he was looking elsewhere — and Bali was always on the back of his mind.

“I felt that it was the right time to have a secondary residence, which I could use on a semi-permanent basis at any time,” Moore told Insider. “I’m probably going to spend half the year there in Bali, and the rest of the time on business trips and in Hong Kong.”

After looking at dozens of properties on the island in person, Moore ended up shelling out 10 billion Indonesian Rupiah, or $674,022, on a two-story house in Tumbak Bayuh. The neighborhood is a ten-minute drive from the center of Canggu — a village on the south coast of Bali known for its beach clubs and thriving surf scene.

The house, with its modern design, slate color scheme, and full-length sliding doors, is a far cry from the typical Balinese villa.

“I was there for a period of two weeks and I frankly wasn’t expecting to find something immediately,” Moore said. “On my last trip out in April, I was just looking around in Bali for the right kind of property to buy, and I was fortunate enough to find it.”

Moore is far from the only expat to snap up property on the Indonesian island of Bali as borders reopen and the world takes on more of its pre-pandemic rhythms.

Long an international tourism destination drawing visitors with its beaches and vibrant nightlife, Bali is rapidly becoming a hot sellers’ market thanks to the pandemic, changes in working styles, and a new second-home visa scheme.

Bali welcomed 371,504 foreign visitors in the first half of 2022, per the Central Statistics Bureau of Bali. In contrast, there were only 51 foreign visitors for the whole of 2021. And as life starts to go back to pre-pandemic normal, the island’s real estate scene is heating up.

“The last 18 months — I’ve never seen it been busier in Bali,” Nathan Ryan, the founder of Bali Realty, told Insider. “In terms of sales numbers, we’re probably doing three to four times the volume of our usual average from the last decade.”

His company, which was founded in 2009, deals primarily with villas and undeveloped land in the south of Bali, including tourist hotspots Uluwatu and Ubud.

Buyer interest has spiked from people in Russia and Ukraine in particular, Ryan said: “That market was not super strong before, but there’s been a tenfold increase in buyer interest from those two particular markets.”

Marc Hirte and Amadeus Förster, the founders of Bali Real Estate Consultants, said they have seen an increase in viewing requests and construction deals of off-plan projects.

“For the first time in my career doing real estate in Bali, the market has shifted into a seller’s market. Many can’t find what they are looking for anymore, so a lot ends up in building projects,” Hirte told Insider.

When they launched the company three years ago, buyers were looking for bargain deals. These days, clients are willing to pay what it takes to get the house they want, Förster said. They’re getting inquiries from around the world, but especially from people in expensive cities like Hong Kong, Singapore, and Los Angeles.

Förster said many people are looking to move to Bali because of the island’s affordability: “Just by looking at the cost of living, here everyone can afford to have a nanny, to have cleaners, to have a private chef, and basically live a life that wouldn’t be possible with the same budget in any major city in the world.”

There’s also the matter of visas: In an effort to entice more people to come to the country, Indonesia introduced a second-home visa scheme in June. The visa is aimed at foreign retirees who want to stay for the long-term but might not qualify for other residence permits. Although unconfirmed, the country is also toying with the idea of a five-year digital nomad visa, Sandiaga Uno, the minister of tourism, told Bloomberg in June.

Many of the expats house hunting in Bali are looking to take advantage of remote-work opportunities — and they’re bringing their families along, Ryan said.

“We get buyers sometimes where one of the partners might need to go back to Singapore or Hong Kong once a week or a month to their corporate office, but spend the rest of the time here,” Ryan said.

Others, Förster said, want an easy-living landing pad for a couple of months at a time: “Some of our clients don’t want to rent a home. They want it maintained and ready when they arrive, so they can just use it whenever they’re here.”

Rising prices and shorter leases in the island’s rental industry have also resulted in housing demand from those who originally intended to rent or had previously been renting, Hirte said.

Förster pointed to the example of a Swedish couple from Los Angeles who was looking to move to Bali. The couple’s son had a rare medical condition, so their move to the island came with a set of requirements, including proximity to good hospitals and to the Green School, a prestigious private kindergarten in Ubud. After calculating the cost of renting a property, the couple decide to buy a home instead, and not just any home: They settled on a million-dollar property.

That, Förster said, “is something that I think wouldn’t have happened before the pandemic.”

A boost in supply

The supply of houses in Bali has been trying to catch up with the demand.

“The supply index for Bali residences in the third quarter of 2021 is increasing by about 40.8% year-on-year, which could elevate the supply situation in view of the better residential buying momentum,” Victoria Garrett, the head of residential for Knight Frank Asia Pacific, told Insider, citing data from Indonesian real-estate platform Rumah.com.

“I was surprised myself. Probably more villas have been built in the past two years than within those three or four years before the pandemic,” Förster said.

Many of these homes are being sold off-plan, which is how Ariba Belgrave and his girlfriend Ilse De Groot bought their first Bali house.

In 2018, the couple quit their corporate jobs in the Netherlands to travel full time. They’ve been jetting in and out of Bali on trips around the world ever since, but even living the dream can get tiring.

“We got a little bit tired of finding a new place every two or three months,” Belgrave told Insider. “We always tried to rent on the longer term but it’s pretty hard, especially in the area around Canggu, to find a good, affordable, rental place now. Prices are rising a lot.”

Their renting criteria was simple: They wanted a private house or villa with an outdoor garden and pool. For four years, they managed to stay within their monthly rental budget of 14 million to 18 million Indonesian Rupiah, De Groot said — until now.

“These days it’s also not always possible to rent for a month, since the owners like to rent it out for a shorter term because then they earn more money with it,” he said. In the end, it made more sense to buy a home of their own. They spent 2.8 billion Indonesian Rupiah on a two-bedroom, loft-style house with an open-concept design. Situated in an 11-villa development in a small village called Cepaka, the property overlooks lush rice fields and is 10 minutes from the beach.

The house is expected to be delivered in move-in condition by the end of the year, Belgrave said. In the meantime, the couple is living in a house they rent from a Canadian couple — but they can’t wait to move in.

“Our idea is that the sooner we have the keys of the house, the sooner we can live in it and the sooner that we save on rent,” De Groot said. “For us, it was very convenient to invest in something that had a plan and was already being built. The house we bought was the first house we saw and we fell in love at first sight.”