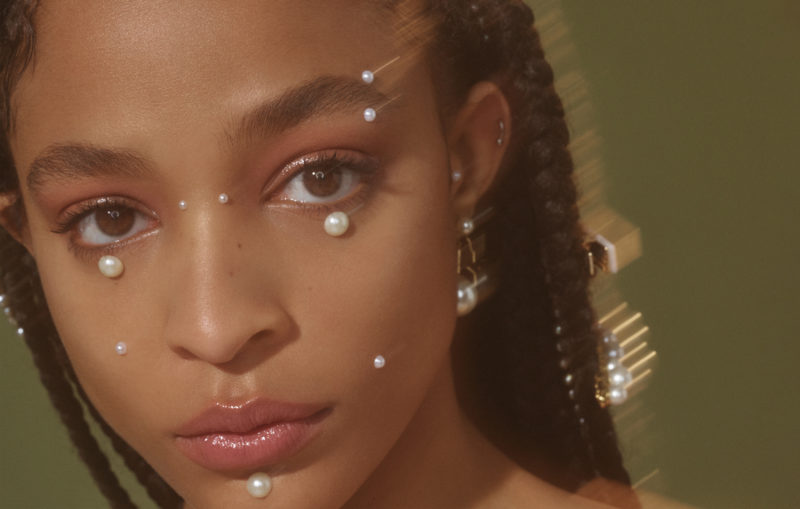 “You have something on your face; let me get it for you,” someone would say. Or “Wow, I don’t remember you having so many beauty marks!” These are just a sampling of the comments I’ve gotten over the years about the small, often-raised brown-black dots scattered in a freckle-like pattern on my cheeks, temples and jawline that began popping up one by one when I was in my mid-20s.

For a long time, I used to think they were just random skin tags that always seemed to first present themselves as flesh-toned before becoming hyperpigmented over time. It wasn’t until earlier this year, when, at the age of 33, I decided to book an appointment with Dr. Geeta Yadav, a dermatologist and the founder of Facet Dermatology in Toronto, that I discovered what these spots actually are.

The motivation for finally seeing a dermatologist was my skin journey during and after pregnancy. While I was pregnant with my daughter, more spots erupted — everywhere this time, it seemed. Along with several more on my face, dots appeared on my neck, an armpit, a breast and even my belly button. And when my daughter was born last year, she became obsessed with touching my face, a fascination that led her to fixate on my spots and pick at them while I sat quietly in discomfort. Don’t get me wrong: I absolutely loved this bonding time with her, but, ouch, it could hurt! Then one day she scratched one right off. “That’s it — these babies have to go,” I said to myself.

During my consultation with Dr. Yadav, she told me that these bumps are called dermatosis papulosa nigra (DPN for short), a benign skin condition common in dark-skinned people that is often hereditary and becomes more frequent with age. “They grow on the surface of the skin and are a variant of something called seborrheic keratosis,” she said. “People commonly refer to them as age spots, wisdom spots or liver spots even though they have nothing to do with the liver.” Other variants, especially those found on lighter skin, look similar to warts and can even appear barnacle-like. “The DPN variant found in brown and Black populations more commonly appears as these skin-tag-like papules,” she continued. She also went on to note that one of the most famous people with DPN is legendary actor Morgan Freeman. (Just think of the iconic raised growths along his cheeks and around his eyes.)

It felt really good to finally get a name for the spots that were gradually appearing all over my face and on other areas of my body, and I was thrilled to learn that the condition is harmless. As for my DPN’s unexpected ramp-up during pregnancy? “Everything tends to grow when you’re pregnant — like your hair, for example,” explained Dr. Yadav. “Your whole body is in this growth phase; you’re very vascular.” Then she laid out my treatment plan.

To remove my facial DPN, Dr. Yadav prescribed electrocautery, which involves the use of a current-based fine-needle-tipped device to burn off spots. For larger DPN markings that really stuck out, snip excisions using surgical scissors would be done. And to ease any pain during the procedure, a topical numbing cream would be applied first. Afterwards, she explained, “those lesions will crust as they heal and fall off on their own, revealing new and healing skin underneath.” She mentioned that laser therapy can sometimes be an option for removing dark spots like these, but it can be tricky on darker skin tones since the laser can have trouble distinguishing between dark skin and the spots, which can lead to scarring.

For several weeks before my electrocautery procedure, I had to apply a custom-blended prescription cream made of hydroquinone, a mild steroid and vitamin A and C daily to prep my face. “Any time you treat something on brown or Black skin, there’s always a risk that the treatment itself leaves behind a mark; this cream helps reduce the risk of discoloration by targeting your melanocytes so that they don’t activate as much,” Dr. Yadav explained, referring to the cells responsible for the skin’s colour. “It acts like a primer to help your skin not overreact in terms of pigmentation from the treatment itself.”

My treatment didn’t take long, and I was shocked when I saw just how many DPN spots I actually had. (The electrical current caused a crust to immediately form, which allowed me to see what I had mistakenly thought were freckles and moles all these years.) And just like Dr. Yadav indicated, the scabs healed in a week’s time with the help of Vaseline, which I would slather on after gently cleansing my skin morning and night. “You can’t put bandages on all of these spots, but you can use Vaseline to create a barrier,” she said. (Let’s just say it was a week of camera-off Zoom meetings and limited outings.) I also had to be extra diligent about applying sunscreen, and once I was scab-free, I continued using my prescription cream for a couple more weeks to keep any discoloration at bay.

One thing to note

Cauterizing is a temporary solution. “You’re still aging, and you have a predisposition for making DPN spots, so they will come back over time but not necessarily in the same locations,” Dr. Yadav shared. It’s now seven months post-treatment, and she was right: I currently have four new DPN spots.

As for getting a second treatment, I’m holding off. Sure, it was incredibly nice having an even-toned complexion for a while (and no spots for my daughter to pick at), but as someone who has been working on adopting a positive mentality about growing older — especially after entering motherhood — despite our youth-obsessed culture, I want to learn to embrace my DPN. Now that I know what my spots actually are, I like to think of these “wisdom” markings as the story of my life.

Facet Dermatology’s Dr. Geeta Yadav notes that in addition to DPN, there are other pigmentary dermatological conditions that occur more often and present differently in people of colour, including melasma and post-inflammatory hyper-pigmentation after skin inflammation or injury, like acne. If you’re looking to be proactive, she recommends maximizing your skincare routine by incorporating a serum targeted at fading existing dark spots and preventing new ones from occurring. More importantly, use an SPF 30 or higher on the daily. “People of colour often think they don’t need sun protection, but it should be number one,” she states.