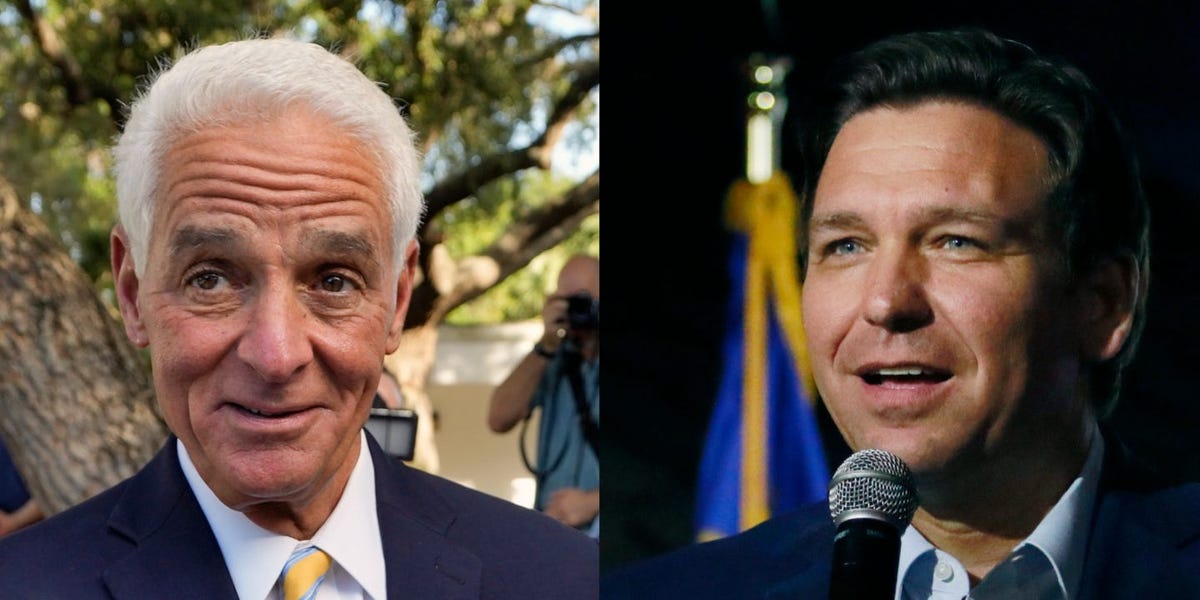 HIALEAH, FLORIDA — Florida voters on Tuesday rejected Democrats’ change candidate in favor of a potential repeat of Rep. Charlie Crist — who roughly a decade ago was the Republican governor of Florida — for a shot at unseating Gov. Ron DeSantis in November.

Crist bested Agriculture Commissioner Nikki Fried for the Democratic nomination. Voters told Insider on Tuesday they thought a candidate with experience who could unify the state would have the best shot against rising Republican star DeSantis.

“Charlie has the message, he has the momentum, and he also has the moment right now,” Democratic state Sen. Shevrin Jones of Miami Gardens said ahead of the election results. “What we’re seeing is a response to all three of those things.”

But DeSantis didn’t mention Crist during a speech he gave at packed campaign event on Tuesday night in Hialeah, a city in the Miami metro area. He instead targeted President Joe Biden, saying that a vote in support of Republicans in Florida in November would “send a message that we are fighting back against his destructive policies.”

In his victory speech, Crist said voters “want a governor who cares about them, who solves real problems, who preserves our freedom, not a bully who divides us and takes our freedom away.”

DeSantis’ frequent criticisms of Biden have led many in political circles to believe the governor will seek the White House in 2024. Florida Democrats have stressed this message in recent months, saying the stakes are high nationally for a candidate who also generates a good deal of support from former President Donald Trump’s voters — and his big-dollar donors.

After his time as governor, Crist ran as an Independent for US Senate but lost to GOP Sen. Rick Scott. He became a Democrat in 2012 and has been in the US House since 2017.

To many supporters, Crist’s extended experience in public office was an attractive quality for the nomination.

“We’re still in a global health pandemic,” Robert Stephens, who is running for city councilman in Miami Gardens to keep the seat he filled through a vacancy two years ago, told Insider. “People are still without jobs, our housing crisis is at its all-time high. We need someone that can get in on day one and actually do the work from day one.”

Democrats have hit DeSantis for the policies he’s pushed in Florida, including restrictions on abortion rights, new rules on voting, and laws that limit discussions on race, gender, and sexuality in classrooms and workplaces.

“If we weren’t in such bad shape, Nikki probably would have had a chance, but because we are in such bad shape we need someone with political experience who can actually get in there and do something and try to save the Sunshine State and bring us back to where we were once before.”

Had Fried won, she would have been on track to become Florida’s first female governor. During her campaign Fried hit Crist for changing parties and positioned herself as a stronger defender of abortion rights given the Supreme Court’s decision to overturn Roe v. Wade.

“I know that we are not going to stop fighting,” she said during her concession speech. “I have been a champion and a fighter for the people of our state our entire life.”

During the race for the Democratic nomination, her campaign said she represented “something new” for Florida, a slogan meant to attract voters such as Charmaine Roundtree, a motorcoach driver in Miami Gardens, Florida’s largest majority-Black city.

“I’ve had the experience of Charlie Crist being in the chair,” Roundtree told Insider as she prepared to vote. “It’s time for somebody different, a new individual, a female especially.”

In her bid for the Democratic nomination, Fried frequently criticized DeSantis — a move the governor said contributed to her loss, accusing her in a press conference in Tallahassee earlier Tuesday of “using her time to basically try to smear me on a daily basis.”

Fried pledged during her concession speech that she would campaign for Democrats all over Florida and said the party needed to unify.

“We are going to make Ron DeSantis a one-term governor,” she said, “and a zero-term president of the United States.”

To many Democrats in Florida, DeSantis’ power in the state is paving the way for a White House run.

“This is the most consequential election in our state that I can ever remember,” Rep. Frederica Wilson, a Democrat of Miami Gardens, told Insider in an interview. Wilson does not endorse during primaries but told Insider ahead of the results she would support whichever Democratic candidate won on Tuesday.

Wilson has been in the US House since 2011, meaning that she and DeSantis overlapped because he was in the US House from 2013 to 2018. Remembering him then versus now, she said, was like seeing “two different people.”

“He never was vocal,” she said of their Florida delegation meetings together. “He never said a word. He never asked questions, and next thing I knew he was running for governor. I couldn’t believe it.”

DeSantis received Trump’s endorsement when he ran for governor in 2018, which helped propel him to the GOP nomination. He won against progressive Democrat candidate Andrew Gillum by just 32,000 votes, but is expected to win by much higher margins in November.

DeSantis himself predicted during his speech in Hialeah that Florida would have “the biggest Republican turnout this state has ever seen.”

A big win in Florida, which was previously a swing state but is now seen as red by many analysts, would help DeSantis supporters make the case he could run for president in 2024.

Wilson said she was “petrified” that DeSantis might run for the White House, citing his policies on education and voting rights.

Stephens agreed: “Everything concerns me about a DeSantis second term,” he said.

One Miami Gardens voter, Sabrina, said abortion rights were important to her vote. Florida recently passed a law that makes it illegal to have an abortion 15 weeks into a pregnancy.

“We have got to get this other dude out,” she said of DeSantis. “He’s crazy.”

But DeSantis has drawn a loyal base of supporters after allowing states and businesses to stay open far earlier than other states.

“I love his stance on COVID,” Karen Thomas, 58, a Miami Gardens voter who has the rare distinction of supporting both Democrats and Republicans, told Insider.

“DeSantis just reminds me a little of Trump,” she said. “Regardless of what people said he still stood his ground. And he stood his ground not only for the vaccines for the kids in school, he did a lot. He didn’t just follow the parties. And that’s what I like about him. I would vote for him again.”