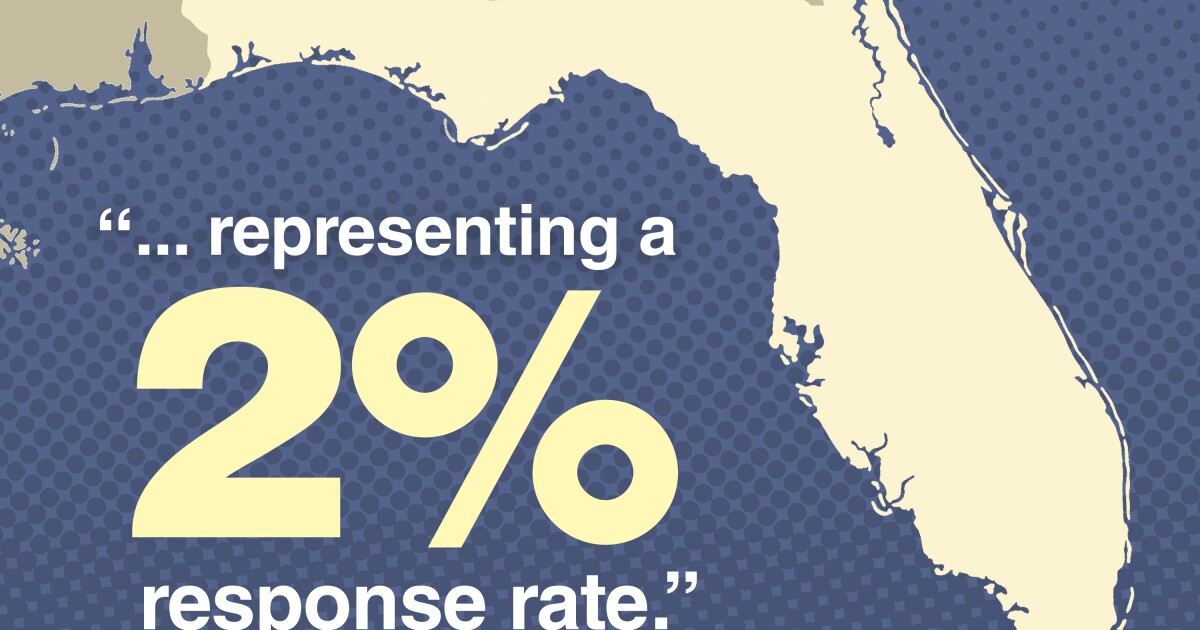 Last year Florida enacted a law requiring an annual survey of public-university students and employees to assess the climate of intellectual diversity on their campuses. Some faculty members criticized the effort from the start, calling it an attempt by the state’s Republican legislators and governor, Ron DeSantis, to gin up support for the claim that conservative students feel unwelcome in college classrooms.

The results of the first survey are in, and one thing is clear: Students weren’t very interested in filling it out.

The low response rate may not have been entirely accidental. The United Faculty of Florida, the union representing professors, called on students, instructors, and staff to ignore the survey, saying it was not administered in good faith.

A 2-percent response rate means that little meaningful can be gleaned from the survey results, said Amy Binder, a professor of sociology at the University of California at San Diego. She said it’s probably not representative of all students, and she raised questions about the methodology.

The way the survey was advertised, she said, could’ve attracted a particular group of students. “Free speech, viewpoint diversity, and concerns about woke-ism have really become a lighting-rod issue for conservatives more than liberals. The people who would be more interested are conservative students because they’re already thinking of viewpoint diversity as a problem on campus,” she said.

Legislators who sponsored the law requiring the survey didn’t respond to messages on Monday seeking comment. A spokesperson for the university system’s Board of Governors, which administered the survey in April and reviewed its findings Friday, said the survey is the subject of pending litigation and therefore board members couldn’t discuss it.

The survey asked for the respondents’ race and gender but didn’t ask for their political affiliation. Out of the 8,800 respondents, 5,192 identified as white. Florida A&M University, a historically Black university with a student body that is 82.9-percent Black, had the lowest participation rate among students: 0.6 percent.

Andrew Gothard, an English instructor at Florida Atlantic University and president of the United Faculty of Florida, said that it’s clear from the lack of respondents that students and staff in Florida colleges are not concerned about the issue of intellectual diversity. (The union is a plaintiff in the lawsuit challenging the survey’s legality.)

“This is a manufactured fight created by Governor DeSantis,” he said. “This survey was a waste of taxpayer dollars.”

Gothard also pointed to technical problems with the survey: A person could take it more than once, he said, and there was no way of verifying that a person who identified as a student in the survey was actually a student.

“This is not a partisan issue,” he said. “Any group could use this survey to defund those who don’t reflect their political ideology at the moment,” Gothard said.

Though the survey elicited a measly response from students, it may be a sign of things to come. Ray Rodrigues, a former Republican state senator who sponsored the intellectual-diversity legislation, is poised to become the university system’s new chancellor. The search committee recommended him for the post on Friday. (His office didn’t respond to a Chronicle request for comment Monday.)

“We have a responsibility to teach students how to think for themselves rather than indoctrinating them on what to think,” Rodrigues said on the occasion of the bill’s signing last year. “Without a measurement of intellectual diversity, it is impossible to know if Florida taxpayers are providing an education or an indoctrination.”