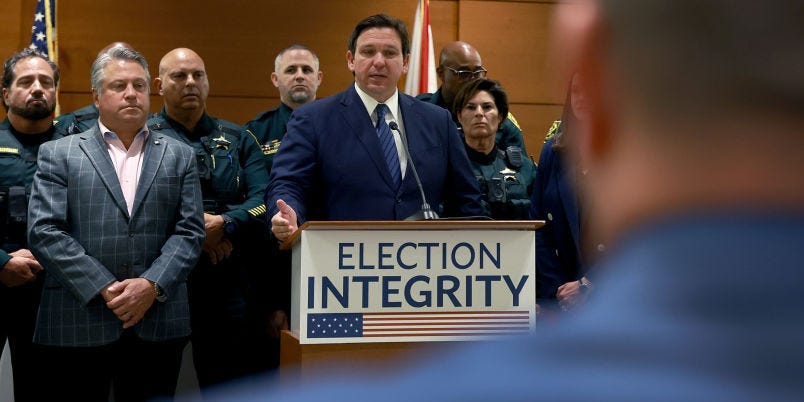 Nearly two weeks ago, Republican Gov. Ron DeSantis of Florida — who earlier this year signed into law a bill creating an election police unit — held a press conference where he announced that 20 people had been charged with voter fraud connected to the 2020 presidential contest.

During his remarks, DeSantis said that the individuals who were charged were barred from voting due to prior murder or sexual assault convictions, yet still cast ballots.

“They did not go through any process. They did not get their rights restored and yet they went ahead and voted anyways. That is against the law and now they’re going to pay the price for it,” he said, stating that the individuals who were identified by the election police force fell outside the parameters of Amendment 4, a 2018 ballot measure approved by Florida voters that restored voting rights to convicted felons, with the exception of those who had committed murder or a felony sexual offense.

But, several Floridians who are facing voter fraud charges stated that they believed they were eligible to cast ballots, and in some instances were informed by government officials that they could vote, according to The Guardian.

The newspaper examined court and election documents for 19 individuals who have been charged and came away with questions about whether the individuals actually committed fraud or were unclear about their voter eligibility.

The individuals who voted all had prior murder or felony sexual offense records, which doesn’t afford them the ability to vote unless they were granted clemency by the state. But they all applied to vote, and their applications were apparently greenlit by local officials, the outlet said.

Several of the defendants even said that they received voter registration cards via mail, which reassured them that they’d be able to vote.

Per The Guardian, the individuals are being charged with a minimum of one count of false swearing stemming from their application forms, along with casting ballots as “unqualified electors,” which are both felony offenses that could result in a maximum of five years in jail and a $5,000 fine.

‘I abide with everything they tell me to do’

While prosecutors will have to build a case to show that the defendants willingly sought to deceive state officials, there is currently no clear evidence on file that would suggest the individuals were told beforehand that their convictions precluded them from voting.

Nearly all of the defendants applied to vote after the passage of the 2018 ballot initiative.

Per The Guardian, affidavits filed with the state earlier this month presented scant evidence that the defendants were aware they were ineligible to cast ballots.

Tampa resident Douglas Oliver — who was convicted of a sexual offense in 2001 and is therefore not allowed to vote in the state — told The Guardian that a canvasser pushed him to register to vote.

After he revealed his felony conviction, Oliver said the canvasser told him that he was still eligible, and after registering, he received a voter registration card from Hillsborough County.

Oliver told The Guardian that he proceeded to call the election office to find out if he could truly vote, and after telling officials about his sexual offense, was still informed he was eligible. He then cast a ballot in the 2020 election.

“I abide with everything they tell me to do dealing with my felony charges,” he told The Guardian. “I wouldn’t have voted. If they said, ‘No, you can’t vote,’ I would have said ‘OK.'”

A Hillsborough County spokesperson told The Guardian that the Florida secretary of state’s office was tasked with monitoring the voter rolls and taking off the names of any individuals deemed ineligible to cast a ballot.

A spokesperson for the Florida secretary of state’s office has not yet responded to The Guardian pertaining to the newspaper’s review.

Former President Donald Trump — who won Florida in 2016 and 2020 — has continued to repeat debunked claims of mass voter fraud in his unsuccessful reelection campaign against now-President Joe Biden and has applied pressure to Republicans across the country to reform voting systems in their respective states.

DeSantis last year signed into law a restrictive voting bill that makes voters apply for mail-in ballots more frequently and limits the availability of ballot drop boxes, in what he said at the time was an effort to make voting more secure in Florida, despite his proclamation that the state “did it right” in administering the 2020 election.

And the governor is now headed into the final months of a 2022 reelection campaign where he will run on conservative reforms that he has implemented since arriving in Tallahassee in 2019.