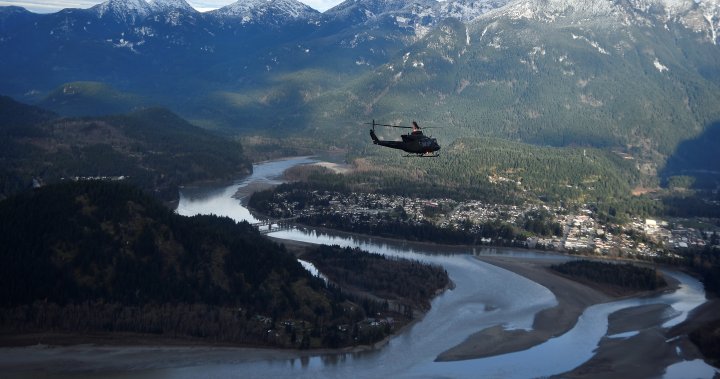 The chair of the Fraser Valley Regional District (FVRD) said Tuesday “urgent assistance” is needed for the area as the last of three atmospheric rivers drenches many parts of the province.

Jason Lum said roads, water systems, diking infrastructure, sewer systems and bridges are all in danger of washing away or suffering catastrophic damage due to ongoing flooding and the district needs help now.

“We are issuing an urgent plea for immediate help to the provincial and federal governments,” Lum said. “We have a number of pieces of critical infrastructure, including the Wilson Road Dyke, that are on the brink of failure, and need help today — not tomorrow or in the coming days or weeks.

“We depend on the province to address issues that arise in places such as roads and culverts.”

The Fraser Valley Regional District is responsible for 14,000 square kilometers of an area that stretches from Abbotsford to Boston Bar and includes six municipalities and eight electoral districts. Within those areas are dozens of pieces of critical infrastructure, including 12 water systems, three sewer systems and numerous diking systems.

Read more:
‘If there’s a breach, we go from zero to 100’: Abbotsford, B.C. on high flood alert Tuesday

This plea comes as some Mission residents were ordered to leave their homes.

The Fraser Valley Regional District’s website says residents of 8400 Shook Road face “immediate danger to life, health and property” as a result of the storm. A local state of emergency has also been declared.

Tuesday afternoon, residents in the Benbow Street sub-division in Hatzic have been asked to leave immediately due to the flooding risk.

On Sunday and Monday, the FVRD also issued evacuation orders for some properties in on the Fish Camp, Othello and Tunnels roads and 12 properties on Laidlaw Road and McKay Road, in the District of Hope.

Flooding from multiple watercourses, including Lorenzetta Creek, Wahleach Creek and Hunter Creek have caused flooding to the surrounding lands, the orders say.

An evacuation alert has also been issued for about 1,600 residents of the Hatzic Prairie east of Mission, and on Tuesday afternoon, the District of Hope issued a similar alert for 114 properties along the Coquihalla River.

Read more:
B.C. under rain, wind and snow warnings amid another atmospheric river

Lum said throughout this historic rainfall event they have experienced delays in getting funding approval from the province.

“Under the current provincial structure, we have to apply for funding and assistance on a case-by-case basis for things as basic as an excavator and quite frankly the responses are coming too little too late.”

The district needs the province to advance funding so they can do the work to save lives and infrastructure, Lum added.

“FVRD staff have been working around the clock with first responders to assist the people who are suffering in this crisis. As a result, FVRD applied to Emergency Management BC for $30,000 in funding to support the standby efforts of FVRD volunteer fire departments who have been on the ground working for 10 days straight. That request was denied,” he said.

“To have a request for $30,000 to compensate those incredible volunteers for the round-the-clock work they are doing shows a complete lack of understanding for our situation and community. It’s an insult to those volunteers who are out risking their lives for their neighbours.”

On Tuesday morning, Public Safety Minister Mike Farnworth said “there is no request for permission for urgent repairs to prevent flooding” from the FVRD.

Lum said he would welcome a call from Farnworth to go over these matters, as the issue “needs to be resolved immediately.”