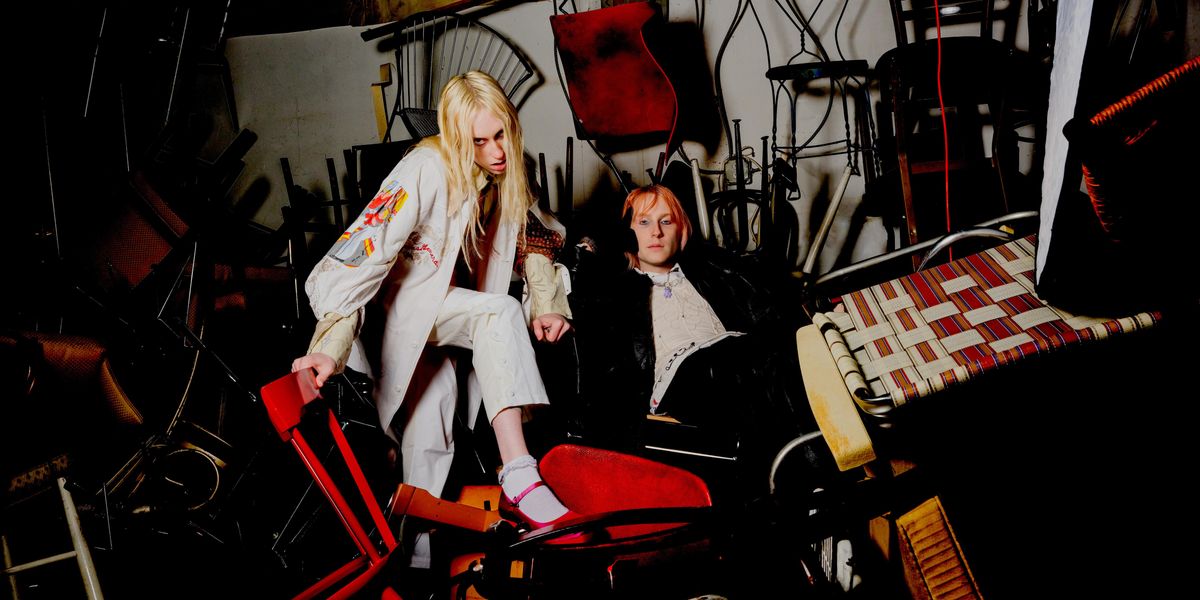 This year, Frost Children are continuing to build momentum with the announcement of Spiral, their next album, that promises to pull inspiration from our collective return to IRL existence. Described by Lulu and Angel as a more “elevated” Elixir Rejection, their forthcoming effort is a result of playing live shows with friends around New York, mixing together all the ideas, experiences and genres that manifest offline.

“GET WHAT WE WANT” was the first official taste of Spiral, with its bratty, techno-punk attitude, and now Frost Children release “MAYFLY,” featuring experimental performance artist Gary Wilson. What began as a simple rhyme (“I’m a mean Mayfly with my paws held high”) evolved into larger social commentary on the bug that famously lives for less than 24 hours. “In that time [they] accomplish everything they want,” Frost Children says, admiring the tenacity.

Below, Frost Children’s Lulo and Angel talk with PAPER about working alongside Wilson, collaborating on “MAYFLY” and the never-ending upward “spiral” of their new LP.

How did you connect with Gary Wilson and what was it like working together on this track?

We reached out to Gary on Instagram DMs and he was immediately open to hearing the track. After sending him an mp3, he recorded his verse remotely in San Diego insanely quickly. He’s super active online and was down for anything.

“Our ‘studio’ is at home, so we’re always just reopening and reimagining things 24/7.”

What attracted you to Gary for this song, in particular?

We knew we wanted Gary to be the only feature on the album before we had even written “MAYFLY.” We’re massive fans of his work and take so much inspiration from him, sonically and in our performances. This track went through so many stylistic changes in the past couple months, but the thing that remained constant was this sense of nervousness and skittishness through the vocal delivery and lyrics. We do tons of different vocal deliveries and “characters” across the album and love adapting our voices to the sound of each track, but for some reason the C section of “MAYFLY” was hard to put anything on. We felt that Gary would be perfect for a sort of spoken word/ singing hybrid verse.

How’d you arrive at a song that references something as specific as a Mayfly?

Honestly, at first it was fully a random reference that fit the rhyme scheme, but we knew we wanted it to be about a bug. After looking up more stuff about mayflies, it turns out they’re actually kinda epic. They’re only alive for like 40 minutes and in that time accomplish everything they want, and they’re all born at the same time and fly through the air and mate and then fall into a pond and get eaten by fish and frogs, and some get lucky and live for like three days. That’s life… if you think about it.

The visuals for this single include a character you call Mesaryth. Tell me more about that and how it connects to “MAYFLY.”

It can be really hard to express real emotions lately, however we see lots of emotions in everyone else. The Mesaryth is a canvas used to paint those human emotions seen in people around us (friends and family). They look a little different in each video for this reason.

What is the collaborative process like between you two? How did that apply to this single, in particular?

We’re siblings, so we grew up with a shared library of musical references and experiences. We also live together, so collaborating musically is an extension of us sort of just riffing on our lives, imagining new things we wish existed already, and not taking things too seriously. This single was a huge collaborative process since the track went through a couple different genre arcs before settling on what it is now. The end result is a solid mixture of both our writing and producing efforts. Our “studio” is at home, so we’re always just reopening and reimagining things 24/7.

“Life is just a never-ending spiral and hopefully it’s upward.”

How is “MAYFLY” representative of your new album, Spiral? What can we expect from that effort?

This track sits between a couple genres and we’re not really sure what you’d label it as, which is the case with most of Spiral. The main thing it has in common with everything else on the project is that it doesn’t have a ton in common, which is kinda like a spiral. The project is definitely about us finding our own unique sound, more confidence vocally and writing songs with the intention of performing them. It’s also a realization that the Frost Children project is ever-evolving and growing, and it’s us embracing the constant motion of the music and art we’ll be making over our lives.

Earlier this year, you released “GET WHAT WE WANT,” also off Spiral. Lyrically, what’s the story behind that track?

[Lulu] wrote the main hook for the track right before moving to NYC directly after making a bunch of softer, meditative tracks, so we wanted to make a track that achieved an opposite purpose. The lyrics also generally just give that loud and insane vibe that’s so addicting to perform live. We call “GET WHAT WE WANT” the “Forbidden Track” because almost during most of the performances of it, something breaks or falls or generally gets fucked up. The very first time we DJ’ed it, some glasses got broken and we got yelled at. The speakers have fallen, equipment knocked off the table, all that stuff. It all adds to the lore of the track.

You released Elixir Rejection last year. In what ways do you think you’ve grown from that body of work, and how might “MAYFLY” signal that evolution?

Elixir Rejection was much more a product of early-pandemic collaboration, while Spiral feels like a resurgence of IRL and online collaboration that fits into the new post-COVID world. We’ve been playing tons of shows with friends and artists we admire in NYC, and that level of cross-engagement shows in the variety of sounds we offer on this project. In general, the new album feels to us like a more elevated ER with some hints of what we’re planning for future projects. Life is just a never-ending spiral and hopefully it’s upward.