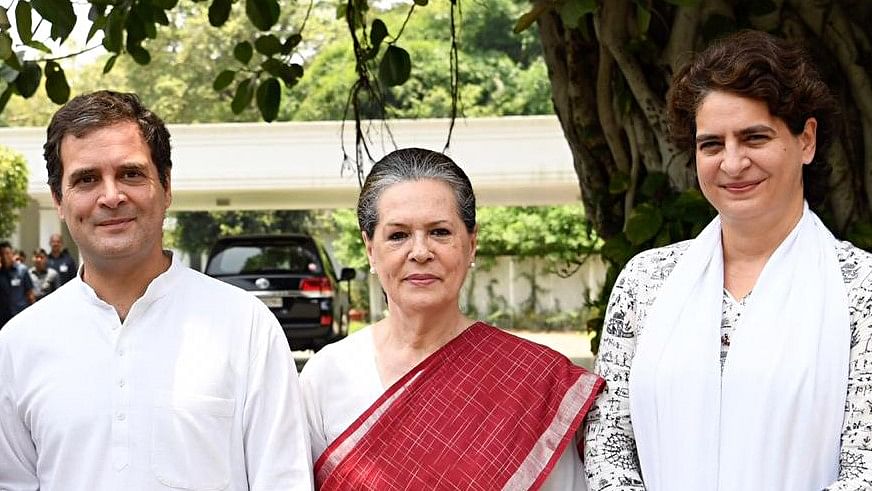 New Delhi: Keeping up with the pledges announced at the Congress’ Chintan Shivir that concluded a little over a week ago, the party’s interim president Sonia Gandhi Tuesday formed three committees to advise her on political strategies and prepare for the 2024 Lok Sabha elections.

Although the party promised a ‘Nav Sankalp’ or a ‘new resolution’ at the gathering, the new groups didn’t reflect any drastic departure and largely consisted of names considered close to the Gandhi family and those who held similar organisational responsibilities earlier.

The prominent members of the committees were the Gandhi siblings, Rahul and Priyanka Vadra, their loyalists and some veteran leaders who have always stood by them, apart from three members of the ‘rebel’ G-23 group.

An eight-member ‘Political Affairs Committee’ to advise the interim Congress chief on day-to-day affairs had only one Lok Sabha member, Rahul Gandhi, along with six serving or retired Rajya Sabha members. Jitendra Singh, an aide of Rahul, and an ex-Lok Sabha member was the eighth name.

Two members of the ‘ginger group’, or the G-23 group, Ghulam Nabi Azad and Anand Sharma, who are now on better terms with the Congress leadership, were also part of this committee.

Sonia Gandhi, at the Shivir, had clarified that the group would be “only advisory” in nature and not have any decision-making powers.

Priyanka, notably, has never contested an election and Surjewala had lost the last two assembly polls he had contested in. The committee will be in charge of the party’s media and communications, finance, election management and other departments as Congress prepares for the general polls.

Sonia Gandhi also constituted a ‘Central Planning Group’ to coordinate the ‘Bharat Jodo’ yatra that will begin on 2 October.

The formation of these three groups is a follow-up of the Udaipur Declaration adopted at the party’s three-day Chintan Shivir, held from 13-15 May.

Also read: After viral ‘UP mein ka ba’, a nation-wide Congress talent hunt for the ‘next Neha Rathore’

Apart from Gandhi and Venugopal, all other leaders in the group are over the age of 60, contrary to a 50-under-50 formula (50 per cent representation of those under 50 years) adopted at the Chintan Shivir. The Declaration had stated that the policy will apply to all organisational posts within the party, along with Congress working towards including more youngsters.

A Congress statement said that each member of the force will have a designated team which will soon be formed.

However, most members of the Task Force who will be taking on responsibilities of one or more departments are already in-charge of these departments by virtue of the organisational posts they currently hold.

Senior leader Mukul Wasnik is currently the party’s longest serving general secretary who still holds his position despite being a G-23 member. He’s also a member of the Central Election Authority (CEA).

Sunil Kanugolu, the youngest member of the group, is a bonafide poll strategist who was recently inducted into the party for the purpose of helping its election campaigns, especially in the states of Karnataka and Telangana.

Apart from these two groups, a third and more diverse group was formed to coordinate the party’s mega ‘Bharat Jodo’ yatra, which is slated to go from Kashmir to Kanyakumari. The members of this group have been selected from different states to make coordination of the pan-India yatra easier.

Those in the group are Digvijay Singh and Jitu Patawari from Madhya Pradesh, Sachin Pilot from Rajasthan, Shashi Tharoor and KJ George from Kerala, Jothi Mani from Tamil Nadu, Saleem Ahmad from Karnataka, Ravneet Singh Bittu from Punjab and Pradyut Bordoloi from Assam.

Of these, Shashi Tharoor was a member of the G-23 group, while Sachin Pilot, who has not had a fixed role in the party since his fallout with Rajasthan Chief Minister Ashok Gehlot in 2018, has also been accommodated.