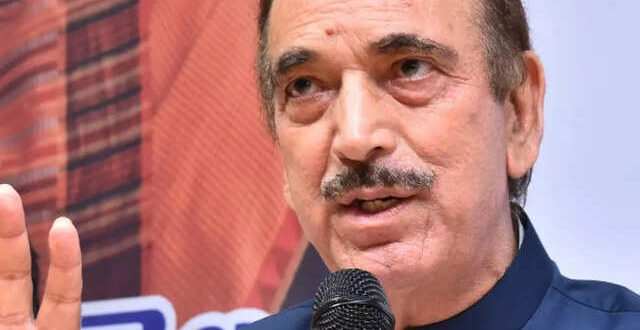 Veteran politician Ghulam Nabi Azad, after quitting the Congress, is ready to launch his own party in Jammu and Kashmir in the next fortnight.

His close confidant GM Saroori said that Azad’s party first unit would be floated in Jammu and Kashmir as elections are likely in that place.

Saroori, a former vice-president of the Congress J&K unit, asserted that the restoration of the pre-August 5, 2019, position of J&K will be part of their party’s manifesto. The new party would also focus on development, unity among all sections of the society, he asserted.

On August 5, 2019, the Centre revoked the special status of Jammu and Kashmir under Article 370 of the Constitution and bifurcated the state into two Union territories.

Saroori is one among the Congress leaders belonging to J&K who quit the Congress in support of Azad. Saroori said that Azad was secular and there was no need of any doubts that he was acting at the behest of the BJP.

Hours after ending his five-decade old association with the Congress, Azad revealed his intention to launch a party of his own. However, he said that he was in no hurry to launch a national party now. Azad hails from the Bhaderwah township of Doda district.

Azad would visit Jammu on September 4 and hold consultations with his well-wishers before the launch of the new party, Saroori said.

Seventythree-year-old Azad served as the Chief Minister of Jammu and Kashmir from November 2, 2005 to July 11, 2008. “People of J&K view his rule as a golden era and they want him back,” Saroori said.

He said the Congress is almost finished in Jammu and Kashmir with the departure of Azad. Many J&K leaders are queueing up to meet Azad and extend their support.

Over a dozen leaders, including former ministers and MLAs, resigned from the basic membership of the Congress in support of Azad.

The J&K Congress leader said that Azad was a secular leader who worked to strengthen the party for the last five decades. “All of us have given our blood and sweat, but how can you stay back in a party which is insulting and humiliating you,” he asked.