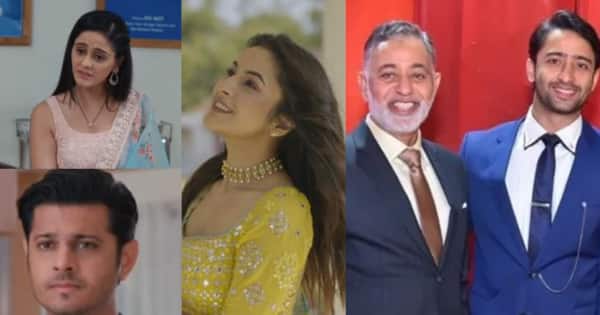 Shaheer Sheikh, Shehnaaz Gill, Ghum Hai Kisikey Pyaar Meiin, Naagin 6, Yeh Rishta Kya Kehlata Hai, Mansi Srivastava, Yash Pandit, Mouni Roy, Karishma Tanna, Bigg Boss 15 and more made news this past week. We are here with a round-up of the TV newsmakers of the last seven days for y’all. A couple of tragic news surfaced. Some celebs are prepping for their wedding that has made the buzz. Popular TV shows such as Anupamaa, Bade Achhe Lagte Hain 2, Yeh Rishta Kya Kehlata Hai and Ghum Hai Kisikey Pyaar Meiin made the buzz this past week. So, without further ado, let’s check out who and what made news in the TV world last week. Also Read – Trending TV News Today: Sidharth Shukla’s fans celebrate his journey on ITV, Shehnaaz Gill’s pictures in lehenga choli go viral and more

Shaheer Sheikh’s father had been admitted to the hospital due to COVID. The Pavitra Rishta 2.0 and Kuch Rang Pyaar Ke Aise Bhi 3 actor had taken to his social media handle to update his fans about the same. He also asked fans to pray for his health. However, Shaheer’s father lost the battle to COVID. Early morning on 20th January, news surfaced that Shaheer’s father passed away. Aly Goni, Hina Khan and other friends and well-wishers of Shaheer sent condolences to Shaheer and his family. Also Read – Shehnaaz Gill looks like a princess in a yellow lehenga; Fans go ‘Mashallah mashallah’ – see pics

This week, Shehnaaz Gill made a lot of news. All thanks to her active Instagram. Fans of Shehnaaz Gill who had been missing her were super happy on seeing the bubby and chirpy actress being so active. She shared a couple of posts, some photoshoots, some ads and also a spoofy video, all of which went viral on the gram and became a trend on social media. Shehnaaz collaborated with Yashraj Mukhate for a spoof video in which they recreated her dialogue from Bigg Boss 13. “Such a boring day,” became a huge trend reel. Yashraj’s spoof on Sadda Kutta Tommy by Shehnaaz had been a huge hit too. Shehnaaz recently visited Brahmaskumaris and shared pictures from her trip. The actress also shared some uber-gorgeous pictures from her photoshoot. Also Read – Ghum Hai Kisikey Pyaar Meiin actor Yash Pandit aka Pulkit to tie the knot on Saturday

This week in Bigg Boss 15, we saw Rajiv Adatia entering the house with some special powers. He made the housemates meet their families via video calling. Karan Kundrra’s mom-dad saw their kid after a long time, Tejasswi Prakash’s brother called her, Nishant’s mom-dad called, Pratik Sehajpal’s mother called, Rakhi Sawant, Rashami Desai, Devoleena Bhattacharjee, Shamita Shetty‘s family members called too. It was an emotional week. Tejasswi and Karan’s families have accepted them both and their relationship as well. This week we also saw Ticket To Finale task taking place. Nishant Bhat, Rakhi Sawant, Karan Kundrra, Pratik Sehajpal and Shamita Shetty. We also saw a couple of fights breaking out between Tejasswi and Devoleena, Tejasswi and Rakhi, Shamita and Tejasswi, Shamita and Nishant, Rashami and Devoleena, Abhijit and Devoleena as well. Vikas Gupta came out in support of Karan Kundrra for his ‘toxic’ relationship with Tejasswi Prakash.

Umar Riaz has been in the news for various reasons this week. Be it his conversation with the paparazzi or his interviews. Umar opened up on creating a love angle on Bigg Boss 15. The ex-Bigg Boss contestant said that he would have created a love angle right at the beginning if he wanted but he was there for the game. Umar said that he genuinely likes Rashami Desai. He also opened up on Sidharth Shukla’s demise. Umar said that Asim Riaz was distraught after Sidharth’s demise. There were also speculations of Umar dating Manpreet Kaur, however, he put a stopper to that.

This week Ghum Hai Kisikey Pyaar Meiin made news for the dip in the TRPs. The ratings of Ghum Hai Kisikey Pyaar Meiin saw a slight dip due to the ongoing track of Shruti, Sahas. Neil Bhatt, Ayesha Singh and Aishwarya Sharma starrer TV show’s fans had been complaining to the makers about the ongoing track. They didn’t want to see Virat being slammed by his family for helping Shruti and Sahas. The makers have been dragging Shruti and Sahas’ track for far too long now. Sources had informed that the makers were planning to continue with the track as long as the TRPs didn’t suffer. This past week, Ghum Hai Kisikey Pyaar Meiin lost its second position on the TRP chart and registered about 2.9 million viewership impressions only. It seems the makers will now finally take the step to change the track, as the audience wants.

Rupali Ganguly, Madalsa Sharma, Gaurav Khanna and Sudhanshu Pandey starrer Anupamaa made the news for various reasons too. Anuj and Anupamaa’s growing romance, Vanraj and Mukku’s growing closeness, Samar and Nandini’s separation kept the show in the news. Plus, the TRPs made them the TOP show again. Rupali Ganguly and Gaurav Khanna’s scenes were the highlights this week. Also, major family drama is in store in Anupamaa in the upcoming episodes.

Nakuul Mehta and Disha Parmar‘s Bade Achhe Lagte Hain 2 grabbed headlines for their episodes. The romance of Ram and Priya kept the audience entertained the whole week. Fans were bowled over by the performances of Nakuul and Disha. The latter, especially, got all the love for playing the role of drunk Priya on Ram’s birthday. Romance scenes between Disha and Nakuul were the highlights of the week.

Harshad Chopda, Pranali Rathod and Karishma Sawant starrer Yeh Rishta Kya Kehlata Hai saw a hike in the ratings and position on the TRP chart. It grabbed the second position on the TRP chart this week with 3.1 million viewership ratings. It’s all thanks to Abhimanyu and Akshara’s scenes and chemistry. Akshara had met with an accident and Abhimanyu had helped her recover by performing surgery on her. Harshad Chopda and Pranali Rathod’s acting chops kept the audience hooked to their TV show.

Ekta Kapoor‘s Naagin 6 made headlines for various reasons. Firstly, the report of Ekta auditioning about 55 plus heroines for the lead role grabbed headlines. Then names such as Mahira Sharma, Ieshaan Sehgaal being approached for the show intrigued the audience. Rubina Dilaik, Tejasswi Prakash, Mahima Makwana, etc have been the names surfacing throughout the week and again for the role of Naagin. However, there’s no confirmation about the same. The new promo of Naagin taking the COVID virus head-on was released which was brutally trolled by the netizens.

Yash Pandit’s wedding is to take place today. The pre-wedding festivities and functions took place at his home while following the COVID protocols. The Ghum Hai Kisikey Pyaar Meiin actor will be tying the knot with his long time girlfriend Mahima Mishra today. Ishqbaaaz actress Mansi Srivastava is also going to tie the knot today (22nd January 2022). The actress had been dating Kapil Tejwani since 2019. Her pre-wedding functions had been going on for the last couple of days. Mouni Roy is reportedly going to tie the knot with Suraj Nambiar on 27th January 2022. The wedding will reportedly take place in Goa. The guests are expected to reach by 23rd January as the pre-wedding functions will begin from the same day. Karishma Tanna has also grabbed headlines for her wedding deets. It is said to be a mix of South Indian and Gujarati wedding for Karishma Tanna and her beau Varun Bangera.

At the beginning of this week, Avinash Sachdeva and Palak Purswani made news for their break-up. Palak and Avinash were in a relationship for about 4 years and had their roka in January last year. Palak said that she has forgiven him for something he never apologised for. On the other hand, Avinash went on to say, ‘taali kabhi ek haath se nahi bajti’ and added that a toxic relationship is never good for anyone. However, both maintained that they will cherish their time together forever.

A couple of days ago, Shireen Mirza and Vicky Kaushal’s old video went viral in which the two were seen performing an act on stage. Shireen revealed that they had been old buddies. She revealed that were together in acting school and were tallest in the whole batch and hence would be paired together quite often. Shireen shared some fond memories of hanging out together during their acting school days. The Yeh Hai Mohabbatein actress said that she had invited him for the wedding too.