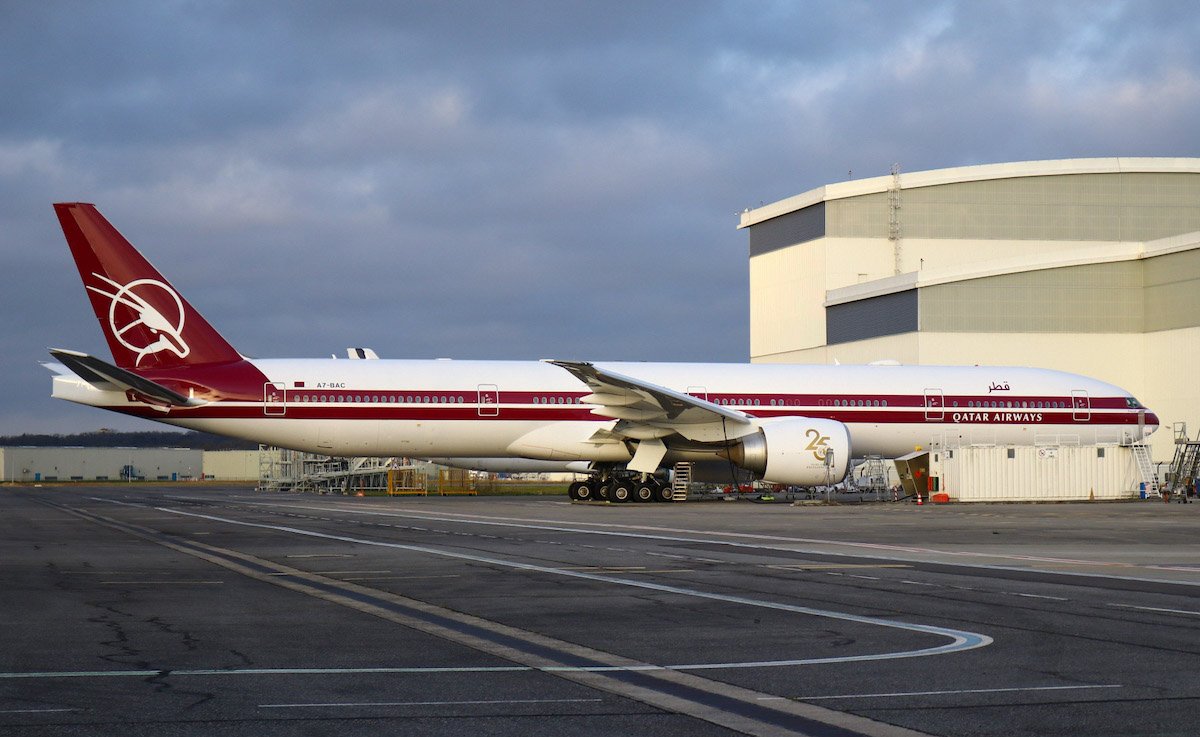 A picture has emerged of a Qatar Airways Boeing 777-300ER sporting a special livery. The plane in question has the registration code A7-BAC, and it’s a roughly 13 year old aircraft that entered service in 2008.

The plane flew from Doha (DOH) to Toulouse (TLS) on January 26, 2022, and presumably that’s where the plane has been repainted over the past few weeks. Funny enough Toulouse is the home of Airbus, which Qatar Airways is currently in a big dispute with, so it’s funny to see a Boeing aircraft being repainted there.

The plane hasn’t yet reentered service, but it looks like at least the new paint job is done — I imagine other work may be done on the plane as well, since they often do multiple things at once. You can track the registration of this aircraft here.

Based on what’s written on the engines, it would appear that this is a special 25th anniversary livery, as Qatar Airways is currently celebrating that milestone. Indeed, this is more of less Qatar Airways’ initial livery when the airline was founded. As you can see, there was a big focus on burgundy, and the oryx was featured on the tail.

In some ways, not all that much has changed — Qatar Airways jets still have the oryx on the tail, and burgundy is still prominently featured in the cabin and in all kinds of branding and marketing.

Us avgeeks usually care about liveries more than the average person. If you ask me, Qatar Airways does an amazing job with its livery — I think Qatar Airways’ current livery is just perfect. I also have to say that I really like the old livery as well, and I feel like it almost looks modern, and look it could work as a standard livery nowadays. To me it’s timeless.

Qatar Airways is painting a Boeing 777 in a special livery to celebrate the carrier’s 25th anniversary. This is the same livery with which the airline launched, and it’s one of the coolest special liveries ever, if you ask me. I can’t wait to see this plane in person one day!

Do you love Qatar Airways’ retro livery as much as I do?