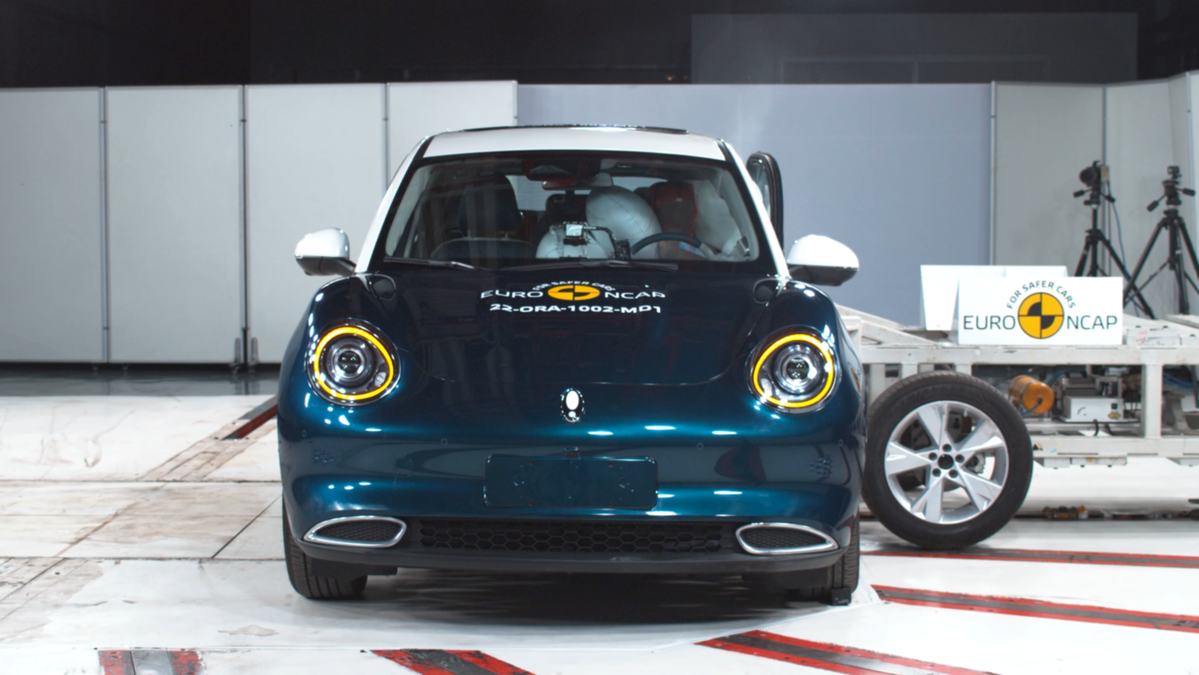 One right-hand drive example has already been spied in Melbourne, with GWM confirming it’s here for local testing and validation.

Euro NCAP says the Funky Cat’s passenger compartment remained stable in the frontal offset test, with good protection for the knees and femurs of front-seat occupants.

The safety authority also found the AEB system worked well in avoiding or mitigating most collisions with other vehicles.

Euro NCAP announced the five-star rating in tandem with five-star ratings for the electric Tesla Model Y, Genesis GV60 and Kia Niro, as well as the plug-in hybrid Wey Coffee 01 – also from GWM.

As the European safety authority and its Australian counterpart have harmonised their testing protocols, the ratings for the trio of electric SUVs have led to five-star ANCAP ratings.

“We’ve seen good results from some Chinese manufacturers in the past, but also some very poor ones,” said Euro NCAP secretary general Michiel van Ratingen.

“This year, Euro NCAP will test more Chinese cars than it has ever done and Great Wall really sets the standard for others to follow.”

While GWM Ute models built before then don’t automatically receive the same rating, owners can take their vehicles back to the dealer for replacement components that bring it up to par with newer examples.

The company is expected to bring vehicles from its Chinese-market Ora and Tank brands in 2023, to be sold under the GWM banner.

The Funky Cat, or whatever it’ll end up being called here, will be the company’s first EV in Australia.

“Ora remains very firmly in our sights for Australia although timing still remains under discussion,” said a spokesperson for GWM Australia.

“However, our local testing and validation continues and I can confirm we have our first Ora here on the ground to help firm up the business case.

“We’ve been impressed with what we see and we’re quietly confident new car buyers will be too. But let’s wait and see what the coming months hold.”

Specifications published on the brand’s UK website show the Funky Cat as having a 48kWh battery with a claimed range of 310km on the stricter WLTP test cycle. A larger 59kWh battery is available in China.

The hatchback features a front-mounted electric motor with 126kW of power and 250Nm of torque, good for a 0-100km/h time of 8.3 seconds.

It’s 4235mm long on a 2650mm wheelbase, about bang-on the same dimensions as the current Volkswagen Golf, and weighs a fairly light 1555kg. It also sits on a bespoke electric-only architecture and uses MacPherson strut front and torsion-beam rear suspension.

There’s 228L of boot space, expanding to 858L with the rear seats folded.

When it arrives here, it’ll rival the likes of the upcoming MG 4 EV and BYD Dolphin/EA1 at the low-end of the EV market.

Both of these Chinese electric hatchbacks are due here in 2023.