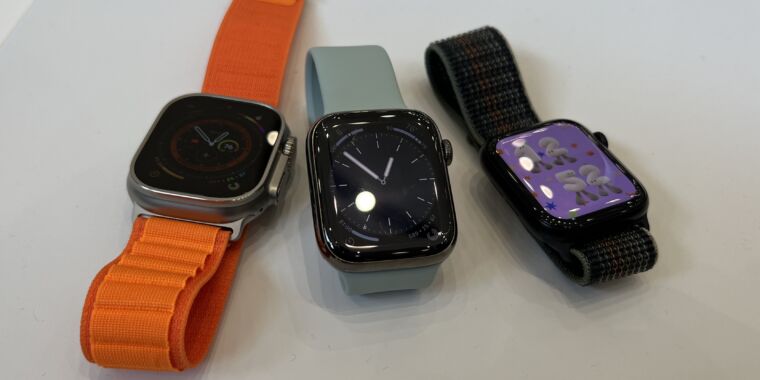 CUPERTINO, Calif.—Apple’s Watch lineup doesn’t often see a big shake-up or significant new features, but that wasn’t the case at Apple’s September product launch event today. In addition to modest updates to the Apple Watch Series 8 and Apple Watch SE, the company introduced the Apple Watch Ultra, a rugged, more full-featured step up from the Series 8.

We had an opportunity to hold and photograph all three Watch models briefly at the Steve Jobs Theater. While there wasn’t an opportunity to try out the major new features, even an eyes-on experience with the Ultra reveals it’s a new kind of Apple Watch.

It’s not the first rugged smartwatch on the market, of course, and depending on your needs, it may not even be the best. But it’s the first foray into that world from a company that has otherwise dominated the smartwatch market for years.

The Ultra is noticeably bulkier than its siblings—we’d even go far as to say it has a whole new aesthetic. The screen rises loudly out of the titanium case rather than folding smoothly into the sides like in other models. And the large, new action button is hard to miss.

The SE looks slightly different than its predecessor, but it’s subtle. The Series 8, on the other hand, is indistinguishable from the Series 7 at a glance.

We also enjoyed a quick demo of the new AirPods Pro. Apple promised improved noise canceling, and we happened to have the previous generation with us for comparison. The show floor was loud, and though we can’t exactly claim it felt like it was twice as good, as Apple claimed during the event, it was a noticeable difference.

On the other hand, we didn’t test one of the other big new features: the ability to scan your head and ear with the iPhone’s TrueDepth camera to improve spatial audio. That will have to wait for a later review.

In any case, here’s a look at a few of the minor aesthetic differences on the headphones and their case.