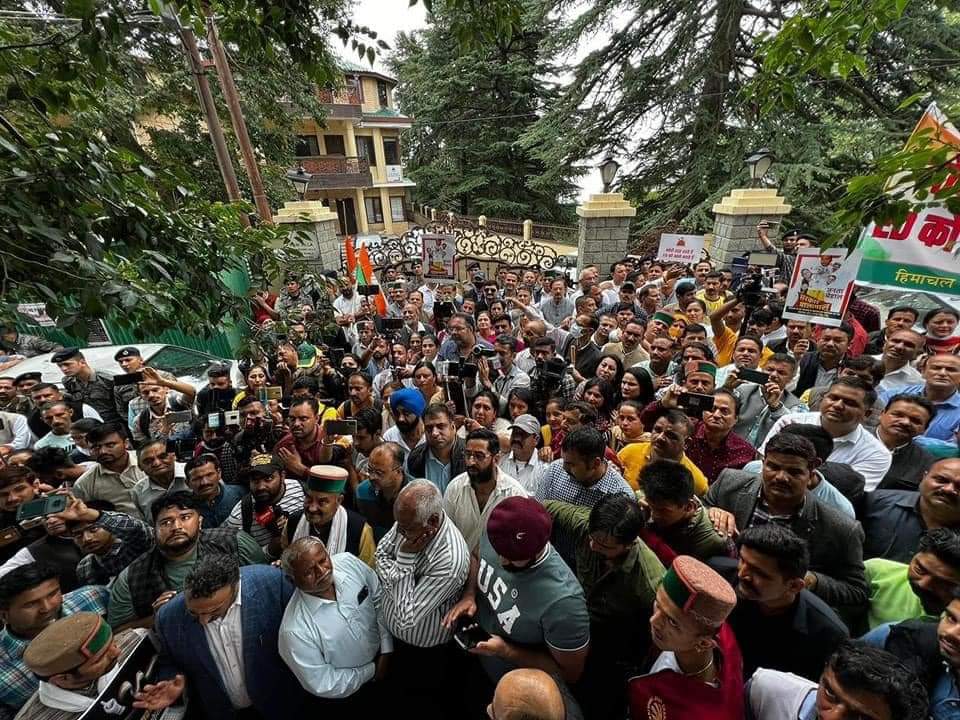 Sanjay Dutt, AICC secretary and co-incharge of Congress party affairs in Himachal Pradesh, said, “Today our leader Sonia Gandhi has been summoned by ED for investigation in a false case. The whole nation is seeing that a few days back Rahul Gandhi was also called questioned by the agency. Everyone knows that it’s a false and politically motivated case. We don’t understand why this is happening.”

According to him, the Modi government wants to suppress Sonia Gandhi and Rahul Gandhi through ED summons to lower the voice of the people of India.

“Under the leadership of Sonia Gandhi and Rahul Gandhi, the Congress party has become the voice of the common people of the country who are talking against issues like inflation, unemployment, failed law and order situation, national security, and democracy that is in danger, the misuse of independent agencies by the Modi government. We are becoming the voice of the common man and are struggling. That is why the Modi government wants to suppress Sonia Gandhi and Rahul Gandhi to lower the voice of the people of India. But we would like to say that we will continue the struggle for the people of India and against the government that is anti-people,” Dutt added.

The AICC secretary warned that Congress will protest outside the ED office Friday if the agency’s summons against the Congress leaders is not stopped.

“They can frame all the false cases through ED, CBI, and other agencies but we will still continue this struggle. Today you’ve seen that all main leaders of Himachal Congress from all districts have come here and we held a sit-in protest outside the ED office and gave the warning to stop the atrocity and by the end, the truth will prevail. Tomorrow we are going to hold a protest at each office in all districts and if such wrong policies are not stopped, then we will take this protest to the block level.”

He said that the Jairam Thakur-led BJP government has failed the common people in the state. “The Jairam Thakur government in Himachal Pradesh has failed at all levels in the last four years. People have understood that they have just presented ‘Jumlas’ and have not done any development work. They talk about double-engine government, but their engine was derailed from the very first day. Now it’s their time to leave. We have gathered to tell that our movement will continue and we are neither going to stop nor bow down or fear,” he said.

“One family that has given everything for the country. Rajiv Gandhi sacrificed his life for the nation, and Indira Gandhi too supremely sacrificed her life for this nation before that Jawaharlal Nehru fought the fight for independence. National Herald newspaper is a nationalist newspaper. We will continue to say that it was prepared for the fight for independence and has played a role. When there was a problem in running it, the Congress party helped it,” he added.

Agnihotri stated that the political scenario will change in Himachal Pradesh within three months and the Jairam Thakur government will not remain in power.

“Sonia Gandhi is a leader who rejected to become the prime minister and you’re pointing fingers at them. The ED and CBI have become the puppets of the government. The politics of suppression is not going to run for a long time. Change is going to come and in Himachal Pradesh, within three months, the power is going to change. Jairam Thakur government will certainly not remain in power. They are going the same way the way they lost four seats. The BJP is worried about the Himachal Pradesh and Gujarat elections and that therefore they are trying to disturb the Congress leadership,” he added.

Several Congress leaders were detained as the party put on a show of strength by staging nationwide demonstrations in support of the party chief.

Congress leader Mallikarjun Kharge said that they raising the issue of misuse of central probe agencies by the Centre.

“They (ruling party) want to show how powerful they are. We’ve raised the issue of inflation in Parliament but they’re not ready for discussion. We are now raising the issue of misuse of central probe agencies,” Kharge.

Rajasthan Chief Minister Ashok Gehlot, who is also in Delhi slammed the probe and said that since Sonia Gandhi is over 70 years old, the ED should have gone to her house for investigation. (ANI)